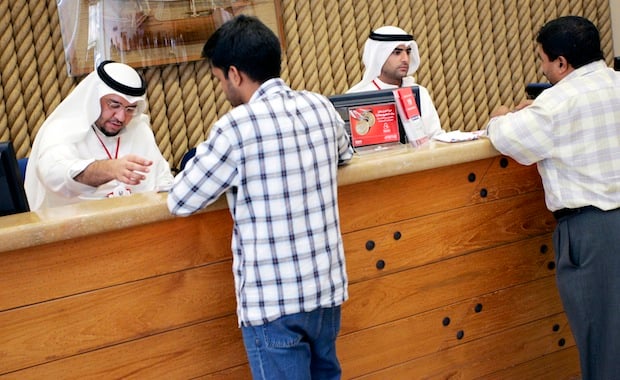 Kuwait’s central bank has instructed local lenders to increase the percentage of Kuwaiti’s in their workforce to 80 per cent by the end of the year, according to reports.

The news follows indications in January that banks had been urged to set a schedule for the phasing out of foreign staff and the limiting of their role to training positions only.

Kuwait Times reports that the instructions from the central bank come under the national labour support law and are expected to provide 17,000 job opportunities for citizens. This would mean a similar number of job losses for foreign workers.

To encourage the employment of nationals, companies that employ more than the allocated number of foreign employees will be forced to pay a fee for each additional worker.

This fee will be around $830 per work permit.

Arabic newspaper Al-Anbaa reported on Sunday that the government plans to force private sector firms to prioritise the employment of Kuwaitis to reduce waiting lists for the unemployed.

This plan will focus on Kuwaitising administrative, human resources, public relations and reception jobs within the next five years, according to the publication.

The public sector is working under similar targets to reduce foreign staff under instruction from the finance ministry.

Departments have been told to prepare lists of foreign staff to be cut as part of a goal for all government positions to be held by Kuwaitis by 2022.

The country’s health minister recently ordered the laying off of all foreign staff older than 65 with the exception of doctors, according to Kuwait Times.