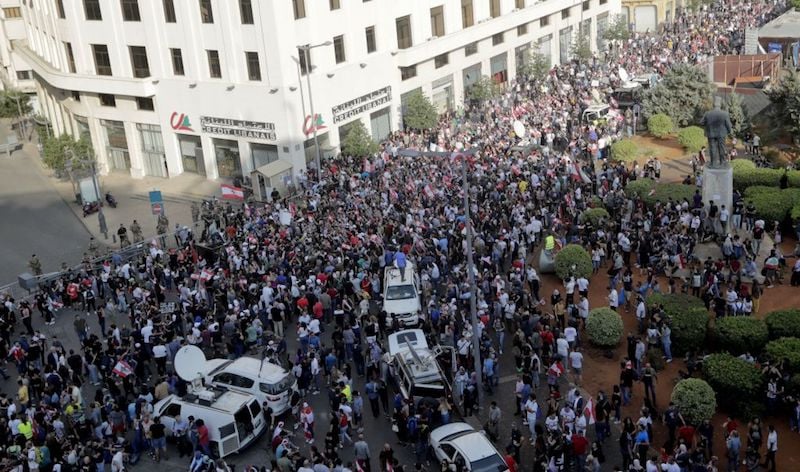 Kuwait and Saudi Arabia have started evacuating their citizens from Lebanon after anti-government protests in the country increased during the weekend.

According to Kuwaiti media reports, up to 300 Kuwaitis have returned home from Lebanon.

The first group arrived on Saturday afternoon after Kuwait’s embassy in Beirut urged all Kuwaitis to reach out for any emergences to arrange their airborne evacuation if needed, local daily Kuwait Times reported.

Kuwait’s ambassador to Lebanon Abdul Aal Al-Qenaie told the paper that a special crisis management cell was immediately formed to work 24/7 at the embassy quarters and Rafiq Al-Hariri international Airport to arrange their flights out.

“Evacuated citizens were instructed to gather at the embassy and then escorted by Lebanese military and security forces to the airport,” he said.

Kuwait Airways chartered additional flights to evacuate them, he added.

The Saudi embassy in Beirut told Arab News that the evacuation operation was carried out due to “the security situation in Lebanon”.

The kingdom secured three Saudia aircraft to transport up to 300 as of Saturday afternoon.

“The total number of those wishing to leave remains unclear. We have identified a hotel in Beirut as a starting point,” the embassy told the paper.

The UAE’s ministry of Foreign Affairs and International Cooperation (MoFAIC) also warned its citizens against travelling to Lebanon until further notice due to recent security developments.

Khalid Belhoul, MoFAIC undersecretary, called on UAE nationals to leave Lebanon and to contact the UAE embassy in Beirut if they need to arrange their return to the UAE.

The Ministry of Foreign Affairs and International Cooperation warns the UAE nationals against travelling to Lebanon until further noticehttps://t.co/TWmnTtJmyr

Protests in Lebanon began on Thursday night and quickly spread nationwide after the government said it would impose a fee on WhatsApp calls, a decision it later retracted.

Protesters continued to block roads with burning tyres and cement blocks early Sunday morning, with many trickling back to the capital, Beirut, to gather outside the Grand Serail, the headquarters of the prime minister.

The government is racing to find a way out of a financial crisis and appease the tens of thousands angry at officials for failing to steer the debt-laden country out of an impending economic meltdown.