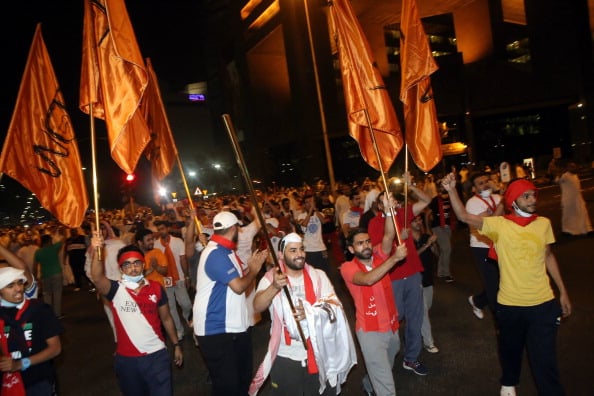 Kuwait’s government has revoked the citizenship of two opposition figures and some family members and shut two media outlets, the state news agency reported, in moves that could deepen a political crisis in the US-allied Gulf Arab state.

The move comes after the cabinet adopted what it called an “iron fist policy” last week following protests over the arrest of a prominent opposition politician, in which the cabinet threatened to remove the citizenship of people suspected of trying to “undermine the stability” of the state.

KUNA said the cabinet agreed at a meeting late on Monday to impose the measures on Ahmed al-Jabr as well as on Abdullah Barghash, his two brothers and his sister, on the recommendations of the interior minister.

The decision will make them lose some of the state benefits that citizens enjoy, including public healthcare, education and housing. But they do not face imminent expulsion.

Jabr, chairman of the al-Youm, an opposition TV channel, and Barghash, a former parliament member, could not immediately be reached for a comment.

However, pro-democracy activist Nasser al-Abdaly told Reuters the government was relying on rarely used laws to target “some of those who oppose the policies of the government”.

He said authorities had accused Jabr of working against Kuwait’s security and stability.

Kuwait’s Information Ministry, in a subsequent move on Tuesday night, canceled the licenses of a local newspaper and a television channel “because they did not fully honour one of the conditions in the licenses,” Muneera Al-Huwaidi, assistant undersecretary for Press and Publications, told KUNA on Tuesday, giving no further details.

KUNA did not identify the newspaper or the TV channel, but Abdelhamid al-Da’as, the editor-in-chief of Alam al-Youm newspaper and a member of the board of al-Youm television channel, said the decision was related to the two media outlets.

“A letter arrived from the Ministry of Information revoking the license of the newspaper and the channel,” al-Da’as told Reuters, adding that they have complied with the decision.

Kuwait, enduring a long feud between the elected parliament and the appointed government in which ruling family members hold some top posts, has been unsettled by an investigation into an alleged plot to overthrow the ruling system.

The cabinet also ordered the closure of branches of local non-governmental public welfare associations for “violating the rules set out by law for the activities of public welfare for which they were licensed.”

It did not name them, but local activists said the main target was an association linked to the Muslim Brotherhood, accused of involvement in politics in violation of Kuwaiti law.

But in an apparently conciliatory gesture, KUNA said that the country’s ruler received the head of the Islamist Eslah association at the Emiri court and invited him to patronise the society’s 50th anniversary celebration.

Kuwait allows more political freedom than other Gulf Arab states. It has a lively press and an elected parliament, but has banned public gatherings of more than 20 people without a permit.

Police used smoke bombs to disperse hundreds of people who tried to march earlier this month from the Grand Mosque to the main court complex to demand the release of Musallam al-Barrak, the opposition politician who had been detained for questioning on suspicion of insulting the judiciary.

Kuwait has suffered bouts of political crisis in recent years amid disputes over election procedures and accusations of corruption and mismanagement by former parliament members and opposition politicians against senior government members and loyalists, including members of the ruling family.

The OPEC member, a close U.S. ally with more than 6 percent of the world’s oil reserves, has been alarmed by the takeover of large areas of Iraq by Islamist insurgents and other forces.