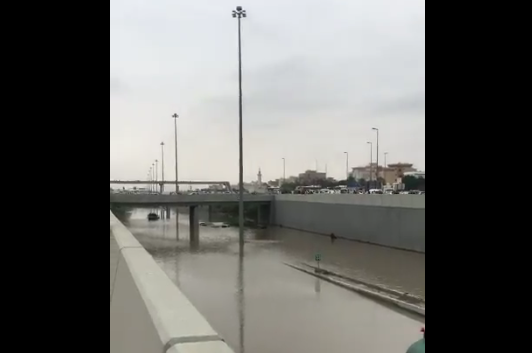 Kuwait’s minister of public works has announced the formation of a panel to expose civil servants that failed to deal with flooding on roads and public places late Friday.

Abdulrahman Al-Mutawa told state news agency KUNA that the committee would examine the causes of the flooding and publish the names of civil servants responsible.

Those found to have failed in their duties, including contractors, would be referred to the public prosecution, he said.

Kuwait was among the country’s hit by stormy weather across the Gulf region over the weekend. The country’s fire department reportedly received around 50 emergency calls during the height of the rainfall, which reached as high as 50mm in Ahmadi.

Boats were used to rescue 20 people traffic inside their vehicles across the city.

Angry members of the public took to Twitter and other social networks to complain about conditions, with many posting pictures and videos.

Among the most affected areas was Road 30, where one video showed drivers being rescued from their submerged vehicles.

Flood in Road 30, Kuwait due to Heavy rains… CTTO: @kuwaitup2date