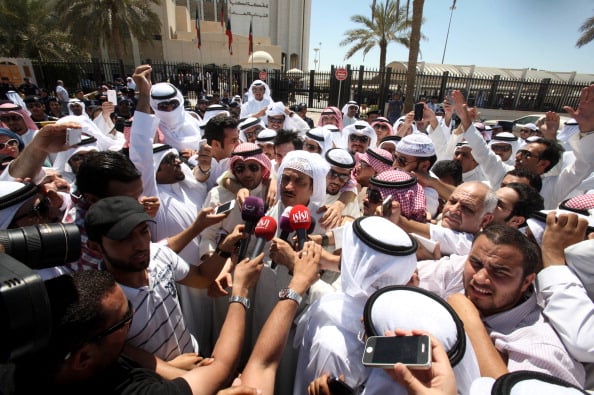 On a January afternoon in Kuwait City, a group of bloggers gathered around three men they would not normally expect to see in a downtown coffee shop, clutching lattes and mochas.

Education Minister Nayef al-Hajraf, Commerce and Industry Minister Anas al-Saleh and Sheikh Mohammad al-Mubarak al-Sabah, all in their early 40s, had come for an informal meeting with some 30 Kuwaiti bloggers and online journalists to discuss issues that concern young people.

“It was an ice-breaking action,” Sheikh Mohammad, a member of the ruling family who is Kuwait’s minister for cabinet and municipal affairs, told Reuters.

Like most countries in the Gulf region, Kuwait has seen little of the kind of turmoil that turfed out entrenched rulers in other Arab countries in 2011. But opposition politicians and a youth movement have been emboldened.

Dozens of activists and political figures have been charged since late last year with insulting 83-year-old ruler Sheikh Sabah al-Ahmad al-Sabah, mainly in comments made online.

Young people regularly spill out onto the street to protest over local issues. Most of the gatherings are peaceful, but some have resulted in clashes with police.

In an attempt to prepare for the future of a country where more than half of citizens are under 25, Kuwait has tasked the three men and other younger officials with exploring reform. With little desire to substantively change the political structure – the Al-Sabah family has ruled Kuwait for 250 years – the men are focusing their efforts on the economy.

Their concerns about Kuwait’s economic future give them common ground with many activists, a Kuwait-based diplomat said.

“They understand the difficulties and the realities of the situation here,” the diplomat said. “But they face huge hurdles.”

A major oil producer and U.S. ally, Kuwait is one of the world’s richest countries per capita and one of the most politically free in the Gulf, but development has stalled due to bureaucracy and political upheaval – December’s parliamentary election was the fifth since 2006.

The economy is almost entirely dependent on oil, even more than most in the oil-rich Gulf region. Income from crude made up 94 per cent of Kuwait’s state revenues in the first 10 months of the fiscal year.

The International Monetary Fund has warned that Kuwait may exhaust all of its oil savings by 2017 if it keeps raising state spending at the current rapid rate.

Officials like Sheikh Mohammad, an influential member of the younger generation of the Al-Sabah family, are acutely aware of the threat posed by this lack of diversification, diplomats and political analysts say.

The younger officials may also be amenable to modest political reforms to ease long-running tensions between the hand-picked government and elected parliament, which are seen to be among the main factors holding up development, they say.

Education Minister Hajraf, who observers say is determined to overhaul the lagging education system, was CEO at an Abu Dhabi real estate company and worked as a financial advisor to Kuwait’s stock exchange before going into government.

He studied at the University of Illinois and completed a doctorate in accounting at Britain’s Hull University.

Saleh, the commerce and industry minister, worked for several financial companies in Kuwait after studying business administration at the University of Portland.

Sheikh Mohammad, the son of a well-known female Kuwaiti poet and a former deputy ruler, like his colleagues speaks almost flawless English thanks to his studies in Britain.

“I was told, no, don’t wear it; the prime minister is not wearing it, and I was very happy to hear that,” he said.

The young ministers have the ear of the prime minister, who selected them for his cabinet, although their influence on major policymaking is not thought to be comparable to the emir’s close advisors.

“These guys absolutely get it,” another Kuwait-based diplomat said. “They understand the need for reform, particularly on the business side.”

This younger generation has contributed to attempts to address the housing shortage and curb the bureaucracy that has held up investment – top concerns for young Kuwaitis today.

A report from the Oxford Business Group said in April that the waiting list for government-subsidised housing has grown to more than 100,000 in a country of 1.2 million Kuwaitis with access to generous welfare benefits.

The government hopes to remedy the shortage with new developments.

There has also been more immediate progress at the multi-billion-dinar sovereign wealth fund, where the amount of money allocated for the part of the fund focused on saving for future generations was more than doubled last year.

Hajraf oversaw that change during a brief stint as finance minister after his predecessor was forced out by a hostile parliament.

The Commerce Ministry under Saleh last year also pushed through a companies law aimed at simplifying procedures and encouraging investment.

The ministry plans to issue temporary company licences on the same day the application is made, rather than having people wait up to a year for a permanent licence – a common complaint among young Kuwaiti entrepreneurs.

THE MEETING AT THE COFFEE SHOP

Some of those who attended the coffee shop meeting on Jan. 22 were disappointed, partly because Kuwaiti media turned up to what was supposed to be a private gathering and the talks veered off into daily politics instead of focusing on a long-term vision for the country.

“There were people from the outside, and they messed up the event,” Khalil Alhamar, a 23-year-old who runs the blog Q8path, told Reuters.

But al-Qabas, an independent daily owned by business families, praised the meeting as an attempt to encourage a dialogue between the government and the youth.

Young people were turned off by official speeches and were turning to social media, the newspaper said in a column at the time. It called the meeting a strange but promising attempt to change the government’s style.

“It is a breakthrough from the formal address, filled with courtesies and empty promises, which state departments’ offices routinely spew out,” columnist Iqbal al-Ahmad wrote.

Blogger Alhamar wondered whether anything would come of it, however.

“We have lots of talk but we need action,” he said.

Kuwaiti Crown Prince Had Back Surgery In Germany