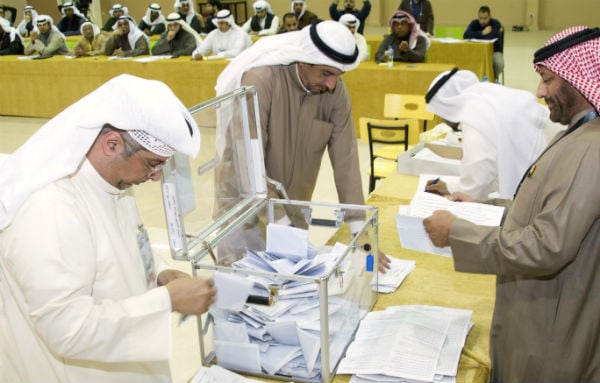 Kuwaitis have elected a parliament including several newcomers which may prove more government-friendly than its predecessor but could lack legitimacy in the eyes of some due to a low voter turnout and an opposition boycott.

About 39 per cent of the 422,569 eligible voters cast ballots, according to a Reuters calculation based on voting figures posted on Sunday on an Information Ministry website. It was not clear if the figures included invalid votes and ministry officials were not immediately available for a comment.

Opposition figures said they believed the participation was lower than that figure. Turnout in the past three elections was about 60 per cent.

The election, on Saturday, was divisive due to a change to voting rules announced six weeks ago by the ruling emir, Sheikh Sabah al-Ahmad al-Sabah, which cut the number of votes per citizen to one from four.

Tens of thousands marched on Friday in what organisers said was the largest protest in Kuwaiti history, to urge people to shun the ballot box in protest at the reform which they said would skew the outcome in favour of pro-government candidates.

The opposition refused to stand in the election, saying the new one-vote system would prevent its candidates winning the majority they had in the last vote in February, when they secured two-thirds of the 50 seats in the National Assembly.

Their boycott meant that many of the candidates running were new to parliamentary politics.

Political parties are banned in Kuwait and the affiliations of many of those who stood in the election were unclear, although political analysts said the fact they ran in the poll meant they were likely to be more sympathetic to the government than the opposition.

Shi’ite candidates won about a third of seats in parliament, Kuwaiti media reported. Shi’ite MPs have tended to be more supportive of the government than the opposition in the past.

Kuwait, a U.S. ally, has the most open political system among the Gulf Arab states with a parliament that has legislative powers and the ability to scrutinise ministers.

But the emir’s Al-Sabah family, which has ruled Kuwait for 250 years, holds the main portfolios in the cabinet and Sheikh Sabah has the final say in state matters.

The election is the second this year in the oil-rich state, where a series of assemblies have collapsed due to a long-running power struggle between the elected parliament and hand-picked cabinet.

The political turmoil has held up economic reforms and investment in the OPEC member state, including a 30 billion dinar ($108 billion) development plan aimed at diversifying the heavily oil-reliant economy and attracting foreign investment.

The opposition, which includes Islamists, tribal politicians, liberals and leftists, formed a bloc that put pressure on the government after their February poll success, forcing two ministers from office. That parliament was dissolved after a June court ruling.

The 83-year-old emir said his emergency decree in October to change voting rules would fix a flawed system and ensure national unity.

The opposition said the old four-vote system helped it forge alliances during election campaigns. Its candidates would call on supporters to cast their additional ballots for allies and these informal affiliations were seen as crucial because of the ban on political parties.