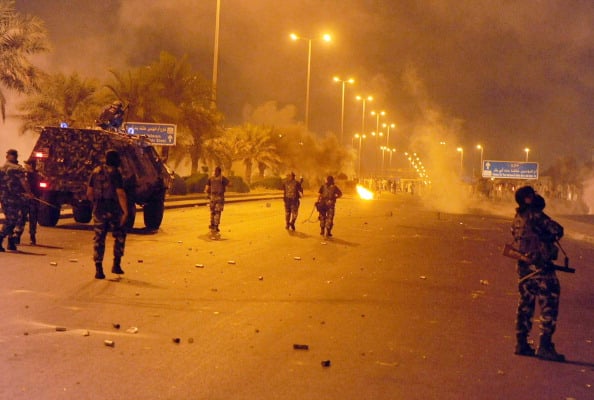 A prominent Kuwaiti opposition politician whose detention last week set off a wave of sometimes violent protests in the oil-rich Gulf Arab state was freed on bail on Monday, his lawyer said.

Musallam al-Barrak, who had been detained for questioning after allegedly insulting Kuwait’s judiciary, has long been at loggerheads with the authorities over changes made in 2012 to an election law which he and other opposition politicians said were intended to prevent them taking power.

One of Barrak’s lawyers, Mohammed Abdel-Kader al-Jassim, said a Kuwaiti court on Monday had ordered the former lawmaker be freed on payment of a KD5,000($17,700) bail and delayed his case until September.

Police used smoke bombs late on Sunday to disperse hundreds of Barrak’s supporters as they tried to march from the Grand Mosque to the main court complex in Kuwait City to demand his release. The police said the demonstrators had failed to obtain a licence for their march.

Kuwait’s Supreme Judicial Council filed a complaint against Barrak after he made a public speech in June alleging corruption in the judiciary.

OPEC producer Kuwait, a U.S. ally, allows more political freedom than other Gulf Arab states. It has a lively press and an elected parliament, but has also banned public gatherings of more than 20 people without a permit.

Last week, Kuwait vowed to deal firmly with pro-Barrak protesters after it accused them of throwing stones, burning car tyres and blocking roads during their demonstrations.

Barrak, who draws support from some of Kuwait’s powerful tribes, was sentenced to jail for insulting the ruling emir in 2013. His arrest and conviction triggered a series of street protests and he was later acquitted.

Unrest flared in 2012 after the emir, Sheikh Sabah al-Ahmed al-Sabah, changed the electoral law before a parliamentary election in December that year.

Barrak and other opposition groups said the move was intended to deny them a majority, and they boycotted the poll.