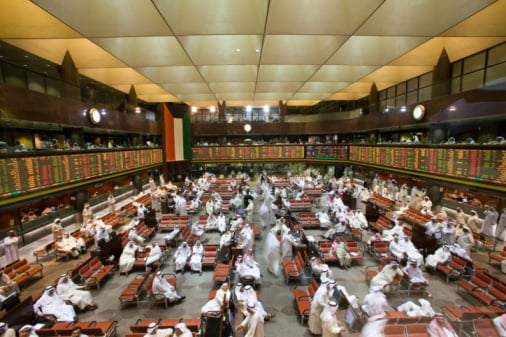 Kuwait’s stock market suffered a blow to its prestige last year when global index compiler MSCI decided to upgrade Qatar and the United Arab Emirates, leaving Kuwait languishing in a lower category. Being left behind may prove profitable for investors in Kuwaiti shares, however.

Qatar and the UAE will move up from frontier market to emerging market status at the end of May, leaving a big void in MSCI’s frontier index, which will have to be readjusted.

Kuwait will remain in the frontier index and become by far the biggest market there. So its weighting in the index is expected to rise sharply – potentially attracting hundreds of millions of dollars of fresh foreign money to the country.

The weighting increase “should provide significant additional liquidity into the Kuwaiti market, and therefore be a positive for Kuwait,” NBK Capital said in a research note.

In recent days there have been early signs of some institutional investors buying beaten-down Kuwaiti blue chips in anticipation of them drawing more interest after rival Qatari and UAE stocks have left the frontier index, traders say.

These include National Bank of Kuwait and telecommunications operator Zain, which are among the top constituents of the MSCI frontier market index.

Investors have good reason to be disappointed by Kuwait; persistent tensions between the cabinet and parliament, and a sluggish bureaucracy, have delayed economic development plans and slowed improvement of the country’s poor infrastructure.

But “passive” investors, which use MSCI weightings to guide their investment choices, are expected to put more money into Kuwait when its share of the frontier index rises.

The Kuwaiti market, which has a capitalisation of about $110 billion, had the biggest weight in the frontier index at the end of February with 17.9 per cent. The UAE had 17.3 per cent and Qatar 16.6 per cent.

NBK estimates that after Qatar and the UAE leave, Kuwait’s weighting could increase to around 30 per cent. A rise of 12 percentage points would imply an additional inflow of about $700 million into Kuwait – more than the approximately $500 million in passive funds which analysts estimate Qatar and the UAE will each gain from their upgrades.

Last year, Morocco demonstrated the benefits of being a relatively big fish in a small pond.

The question is whether other economic and financial developments in Kuwait will combine with the expected inflow of MSCI funds to support an extended rally by the stock market.

In February, the government approved bids worth a total of $12 billion for major upgrades at two oil refineries. Some investors see this as a sign that authorities are finally moving ahead with economic development plans.

“For the first time ever, there are some government changes – there is a massive pent-up demand for infrastructure work and the government can’t wait anymore,” said Rami Sidani, Schroders’ Middle East head of investment.

“We’re at a turnaround and the government will start pressing ahead, albeit slowly. On the ground, projects are starting to take off, which means there will be lending opportunities for the banking sector.”

Such hopes have been raised and dashed in Kuwait before, however. And there are potential negatives in the market; the Capital Markets Authority appears to be cracking down more strictly on violations of listing and trading rules, for example by suspending companies that report losses which greatly exceed their capital.

In the long term, this is probably good for the market. A Reuters survey of a dozen international fund managers last month found they ranked Kuwait lowest among five big Middle Eastern markets for corporate disclosure and enforcement of regulations against improper or illicit trading.

In the short term, however, the crackdown may scare the individual investors who account for the vast majority of trading in the market, reducing liquidity.

Earlier this month, a Kuwaiti court fined the chairman of Al Ahli Bank, the country’s eighth largest bank by market capitalisation, KD1.5 million ($5.3 million) over alleged insider trading in the bank’s shares. The stock is down six per cent so far this year.