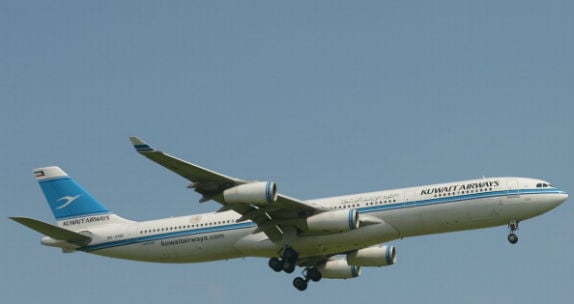 Kuwait is studying plans by its airline to buy 25 Airbus jets, a source with knowledge of the matter said, in the most sweeping overhaul since part of its fleet was seized after Iraq invaded the Gulf state in 1990.

The proposal calls for state-owned Kuwait Airways to buy 25 new Airbus jets and to lease a further 13 to upgrade its fleet but needs government approval, the source said. It could be signed by the end of this month.

The Kuwaiti airline’s aircraft buying committee judged that Airbus made the most attractive offer in a tender process which included bids from Boeing and Bombardier, the source said.

The source declined to be named because the deal still needs government approval.

In August 2007, Kuwait Airways cancelled an order for 19 passenger planes worth $3 billion from local lessor Alafco after failing to get government approval.

Such an order would be worth $4.38 billion at list prices, but aircraft are usually sold at a discount.

The A350 is designed to counter Boeing’s 787 Dreamliner, which would have been included in the deal scrapped in 2007.

Kuwait Airways would start receiving the Airbus aircraft from 2019, the source said, confirming details of the talks originally reported by Al-Watan newspaper on Sunday.

“The final decision is the government’s,” the source said. “I think by the end of this month, they should take it.”

Kuwait Airways and Airbus, which is owned by aerospace and defence group EADS, declined to comment.

Under the plan, the airline would also lease 13 of Airbus’s A330 and A320 models for six years, the source said, without giving an estimate for the cost of that part of the agreement.

One of the reasons the Airbus deal was seen as favourable was that it combined the new and leased jets, the source said, adding that the leased jets should start arriving this summer.

The airline wants to take 11 jets from its old fleet out of service.