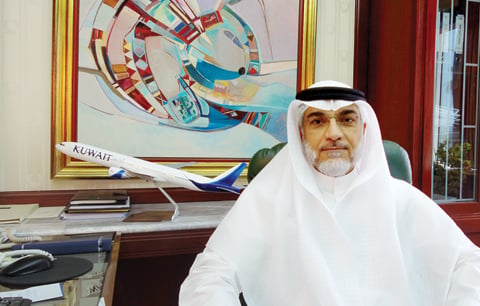 Al-Khuzam, who was appointed to the airline’s board on April 4, assumed the new role and responsibilities on May 4.

The former managing director of AREF Investment Group, advisor to the chairman of Kuwait Finance House and general manager of telco Zain is tasked with reversing the airline’s two-decade slide in profits.

Read: Kuwait Airways expects to make a profit in two to three years

His predecessor, Al-Roumi, cited a lack of “government backing” in her resignation letter in which she accused the government of refusing to honour a KD600m ($1.9bn) payment it had promised to provide.

Kuwait Times reported that Al-Khuzam will retain his board position and his first act as CEO was to undertake and a review of the airline’s five-year strategic plan.

In his welcome statement, the new CEO sought to assure passengers, employees and stakeholders that the airline would continue on its “ambitious acquisition strategy of 35 new aircraft, by 2021”.

He also said he would seek a “thorough reform of the airline’s operations, commercial and service infrastructure” over the coming years.