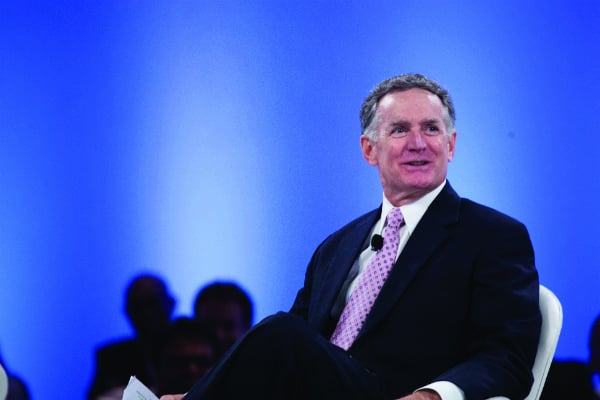 It has been a shaky start to the year for businesses the world over as headwinds from China, low oil prices and growth concerns impact sentiment.

But amid this turbulence, the chairman of ‘big four’ professional services firm KPMG says he is “generally optimistic” about the world economy – and it is easy to see why.

Difficult operating conditions, advances in technology and the need to get closer to the customer mean many companies are now looking for advice in transforming their business or developing their next killer strategy.

And the same can also be said of governments and companies in the Middle East, as diversification becomes the name of the game.

“Obviously some of those negatives and uncertainties are being felt more dramatically here in the region, most particularly the oil price impact,” says John Veihmeyer, who boasts 35 years of experience in the professional services industry.

“But having said that, our KPMG practice in Saudi Arabia is growing at over 25 per cent this year and we expect that to continue. All of our practices in the region are growing at a very rapid pace.”

The KPMG chairman’s arrival in Dubai comes following a pit-stop in Saudi Arabia, where advisory firms are seeing their services in greater demand than ever before as low oil prices force the kingdom to rein-in spending and fast-track its diversification efforts.

“We’re already starting to see that at a number of governments and certainly many ministries I’ve met this week. A number of them are engaged in a very active process of how to transform the way they operate,” the American says.

“All of those needs that they have as these ministries look to transform their operating model fits very neatly into what KPMG has been recognised as a global leader in.”

The company, like its peers in the ‘big four’ – EY, Deloitte and PwC – is seeing increasingly lucrative business come from its advisory arm, rather than the audit services it has been traditionally known for.

Of the $24.44bn in combined global revenues KPMG recorded last year, $9.10bn came from its advisory business, just below the $10.03bn from audit services and well above the $5.31bn from tax.

The growing importance of advisory services was particularly apparent in Europe, the Middle East and Africa, the only region where KPMG made more revenue from it ($4.75bn) than audit services ($4.22bn) last year.

But the KPMG chairman has not just made the journey from his offices in New York to drum up local business. His visit coincides with the finals of the company’s ‘International Case Competition’, an annual event that pits teams of students from across the world against each other in developing solutions for businesses.

The goal, he insists, is about developing talent and giving students a taste of different countries and cultures.

“Talent is the lifeblood of KPMG,” the chairman says, and he only sees the company’s need for skilled and experienced personnel expanding in the future. Last year alone, the firm boosted its global headcount by 7.4 per cent to reach just under 174,000 personnel.

“It certainly gives us an opportunity to hopefully identify some great talent that we’d hope can join KPMG in the future as well,” he says.

Interacting with business students also gives the company a chance to gauge the needs and aspirations of potential upcoming recruits.

In a survey of more than 500 students from 23 countries on the verge of entering the workforce that coincided with this year’s competition, the majority were found to be global in their outlook.

Nearly nine in 10 (89 per cent) said they were prepared to move regularly to a different country for the right job opportunity and 80 per cent said they expected to work in three-to-six countries during their career. The vast majority of participants (93 per cent) also said they were concerned about the impact of geopolitical risk and instability on their careers.

“The world is becoming more global. Your ability to be successful and advance rapidly in that global marketplace is very much dependent upon you acquiring the skills that only come from experiencing different cultures and working with people from different cultures,” he says.

“So I think these students are rightly focussed on the fact that if they can work in three-to-four different countries they will differentiate themselves from some of their peers.”

Perhaps the most surprising result though, given the perception that the millennial generation is prone to job hopping, was that 70 per cent of respondents said they would consider working for the same company their entire career.

“What they are looking for from that company I think is tremendous opportunity both for personal challenge and advancement,” he says. “But they also want different experiences and those experiences include opportunities to work in different fields and avenues.”

These aspirations make them a good fit for KPMG, he argues, which has been on something of an acquisition spree of late to broaden its portfolio of expertise.

The firm has completed an estimated 30 to 40 deals in the last three years, as it and its ‘big four’ peers have acquired dozens of niche advisory and technology firms to meet the evolving demands of clients.

Just a handful of the buy-outs announced by the company last year include the acquisition of the strategy management and commercial consulting arms of High-Point Rendel, the human resources service delivery practice of Towers Watson, transformation consultancy Boxwood, workplace performance boutique Performance Clinic and all of the United States tax software and intellectual property of G2 FinTech.

Veihmeyer reveals to Gulf Business that this acquisition spree will continue, but he insists the company is going about its strategy differently to its peers.

“We are not making acquisitions for the purpose of adding scale or revenue. The acquisitions that KPMG is making are focussed on expanding capabilities and acquiring intellectual property that we think will be valuable in helping us to continue to innovate in our existing service offerings,” he says.

“I expect us to continue to look for those kinds of organisations that can bring either those new capabilities in areas like cyber and data and analytics but also intellectual property that will help us transform the way we deliver services in the future as well.”

But as these big fish continue to eat the little ones, it seems clear that the ‘big four’ is here to stay, at least in the short term. The chairman suggests the transformations required by companies these days involve capabilities and a breadth of service offerings on a scale beyond smaller firms.

“Even organisations that have broad service capabilities and may operate everywhere in the world don’t have today the kind of scale to deliver those services at a level that a lot of companies are requiring,” he says.

“Over time we will see more of those kinds of competitors emerging. But over the next two-to-three years I don’t expect to see a major transformation in the industry in our sector.”

This moves our conversation to KPMG’s standing in the big four, where the company is at the rear of the pack with revenue of $24.4bn, compared to $35.4bn, $35.2bn and $28.7bn for PwC, Deloitte and EY respectively last year.

Veihmeyer is satisfied with the company’s standing but says the firm intends to be the “fastest growing” professional services firm in the future. “That doesn’t necessarily mean we will be the biggest,” he says.

Looking ahead, the chairman expects the company to improve in 2016 on its 8.1 per cent revenue growth last year, partly thanks to its strong performance in the United States. He has equally bold ambitions for the Middle East, where KPMG intends to increase its talent and service investment.

“I look for this region to continue to be one of the fastest growing in our business globally,” Veihmeyer concludes.