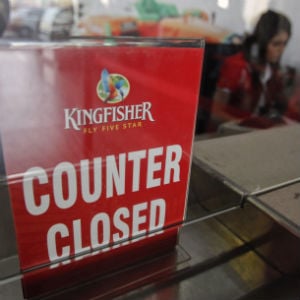 India’s Kingfisher Airlines will be cancelling all its international flights from April 10 and will also reduce its domestic services, its chairman and owner, Vijay Mallya said on Wednesday. The debt-laden airline has been struggling to stay afloat, and India’s Civil Aviation authority is considering cancelling the carrier’s licence.

“We have decided to suspend our international operations as we are not on IATA platforms,” Mallya told reporters after meeting the aviation authority. “So, there is no sense flying abroad.”

The airline flies to eight international destinations in Europe and Asia, and operates daily flights to Dubai. The airline has cancelled several flights in recent months because of its financial situation.

Kingfisher reportedly has a debt of $1.3 billion, and owes money to airports, banks, tax authorities, and its own employees. It posted a loss of $90 million in the last quarter of 2011.

The Indian government had asked Mallya to provide a recovery plan or risk losing the airline’s licence. Authorities have also warned that they are checking the carrier’s passenger safety aspect, whether the planes and pilots were in “good condition.”