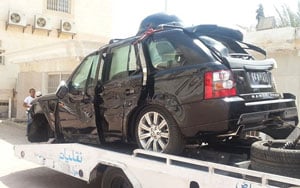 The princess announced the news on her Twitter account in Arabic, citing that the CEO of Kingdom Holdings is safe.

According to reports, Prince Al Waleed, the world’s richest Arab with a personal fortune of around $18 billion, escaped  death when his car, a black Range Rover, flipped over three times of the Jeddah-Makkah highway.

The Prince was accompanying the convoy of King Abdullah bin Abed Al Aziz as it made its way from Jeddah to Makkah and the car was almost completely destroyed by the accident.

Meanwhile, images of the crash vehicle claiming to be the car Prince Waleed was travelling in have also emerged on Twitter, according to Emirates 24/7 newspaper.