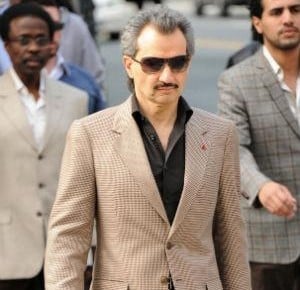 Saudi Arabia’s Kingdom Holding, the investment firm of Saudi billionaire Prince Alwaleed bin Talal, made a 9.4 per cent rise in its second quarter net profit, it said in a bourse statement on Saturday.

Thefirm made a net profit of 178.9 million riyals ($47.70 million) during the second quarter this year, compared to 163.5 million riyals in the same period a year earlier.

Therise in profits were attributed to high profits from the company’s investments and sale of real estate investments which made up for the loss made from hotel revenues in the Middle East due to unrest in the region, the statement said.

Kingdom Holding has minority stakes in some of the world’s top companies. Aside from being one of the largest shareholders in Citigroup, it also owns stakes in Rupert Murdoch’s News Corp and microblogging site Twitter.

The firm is planning to issue a local currency bond. No date has been set for the bond but Banque Saudi Fransi and Deutsche Bank have been mandated to arrange the transaction.

Elsewhere in the Kingdom, Saudi Savola Group posted a 48 per cent rise in its second quarter net profit, beating analyst forecasts on improved profitability in the food sector and its increased market share in the retail sector, a bourse statement on Saturday.

Analysts polled by Reuters expected the firm to post, on average, 306.8 million riyals.

“The reason for the rise in profits for this quarter… is mainly the turnaround in profitability of its operations in the food sector, and the continued growth and increased market share in the retail sector,” the statement said.

Savola expects to post a net income of 340 million riyals, before capital gains, for the third-quarter, the statement said.

Savola also said, in a separate statement, it plans to issue a 0.3 riyal dividend for the second quarter.

Thefirm’s operational profit for the second-quarter rose by 42.6 per cent to 603.8 million riyals.

Revenues for the six month period reached 13.57 billion riyals, up 13.6 per cent from the same period a year earlier, it said.