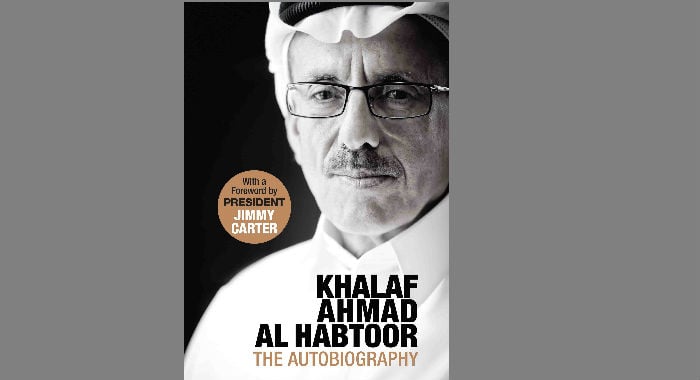 The autobiography from Khalaf Ahmad Al Habtoor, one of the world’s richest men according to Forbes, was launched on Tuesday in the UAE.

Khalaf Ahmad Al Habtoor: The Autobiography offers hands-on leadership advice and entrepreneurial tales from one of the region’s most established businessmen.

“Heritage is important but you have to keep moving,” said Al Habtoor. “I believe in honesty, truth and always thinking ahead.

“Also I don’t understand those who like to party – you have to go to bed early and wake up early to produce.”

Al Habtoor’s solid work ethic is the driving force behind a company that grew from one employee to over 40,000 over the course of several decades.

The business magnate’s new book describes a life always underpinned by his daily ethos: “the best way to predict the future is to create it.”

The 572-page autobiography, which took Al Habtoor more than two years to write, also describes the chairman’s journey to philanthropic and political prominence.

Former congressman, the Honourable Paul Findley, spoke at the launch event of his long-term friend’s book: “While the buildings he has built are beautiful and durable, he has also created something even bigger – a bridge of understanding between the East and the West,” said Findley.

As the only non-US member of The World Board of Governors of the American United Services Organisation between 1994 and 1997, Al Habtoor has worked tirelessly to promote education and dialogues between the two cultures.

“It is great to finally see my life’s journey in print. I hope my autobiography will offer insight to the secret of my success. Success is not something that comes easy,” said Habtoor.

“The book is as much a journey about the United Arab Emirates as it is about me. We have grown together,” he added.

The hard-back copy of Khalaf Ahmad Al Habtoor: The Autobiography is priced at Dhs120.

The book is published by Motivate Publishing and is available at all good bookstores in the UAE.