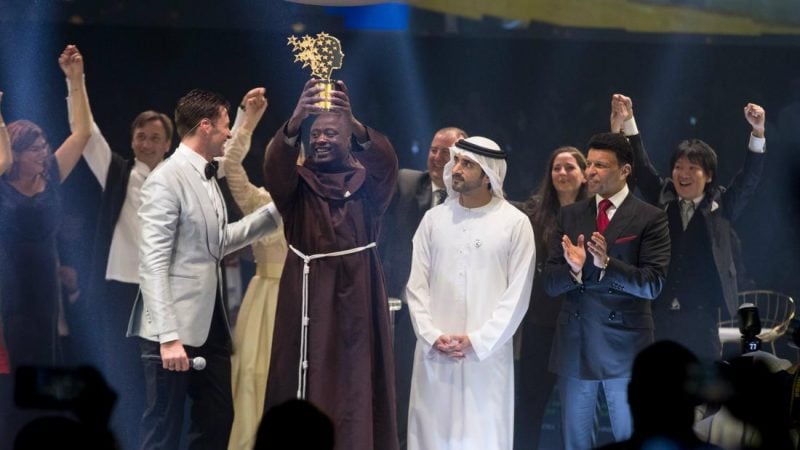 A Franciscan monk from Kenya has been named as the winner of the $1m Global Teacher Prize at a lavish ceremony in Dubai hosted by actor Hugh Jackman.

Peter Tabichi was presented with the award in the presence of Sheikh Hamdan bin Mohammed, the Crown Prince of Dubai, beating 10 finalists at the event, who had been drawn from a long list of 10,000 candidates from around the world.

The 36-year-old science teacher from Keriko Mixed Day Secondary School in Pwani Village, in Kenya’s Rift Valley, dedicated the award to his father, who raised him after his mother died when he was 11. He had been nominated in part for donating 80 per cent of his monthly salary to helping the poor of his home country.

Upon receiving the title, Tabichi said he was “pleased, honoured and humbled,” and added that the award reflects the achievements of Africa’s youth.

“Every day in Africa we turn a new page and a new chapter,” he said.

“This prize does not recognise me but recognises this great continent’s young people.

“I am only here because of what my students have achieved. This prize gives them a chance. It tells the world that they can do anything.”

Officials praised Tabichi for his work at the school, which has a ratio of one teacher to every 58 pupils, and only one computer. He was also commended for his one-on-one tuition sessions at pupils’ homes during weekends.

In a video message played at the ceremony, Kenyan President Uhuru Kenyatta told Tabichi: “You are a shining example of what the human spirit can achieve – not just for Kenya, not just for Africa, but for the world.

“You give me faith that Africa’s best days are ahead of us and your story will light the way for future generations.”

The annual global prize was launched by education entrepreneur and philanthropist Sunny Varkey – founder and chairman of GEMS Education – in 2014, with the first ceremony held in 2015.

The Varkey Foundation’s $1m award is presented to an exceptional teacher who has made an outstanding contribution to their profession.

Varkey said that he hope’s Tabichi’s story “will inspire those looking to enter the teaching profession and shine a powerful spotlight on the incredible work teachers do all over Kenya and throughout the world every day.

“The thousands of nominations and applications we received from every corner of the planet is testimony to the achievements of teachers and the enormous impact they have on all of our lives.”

This year’s glittering ceremony was hosted by Australian actor Hugh Jackman – the star of movies in eluding the X-Men series, The Fountain, and Les Misérables. He performed songs from another of his movies, the award-winning The Greatest Showman.