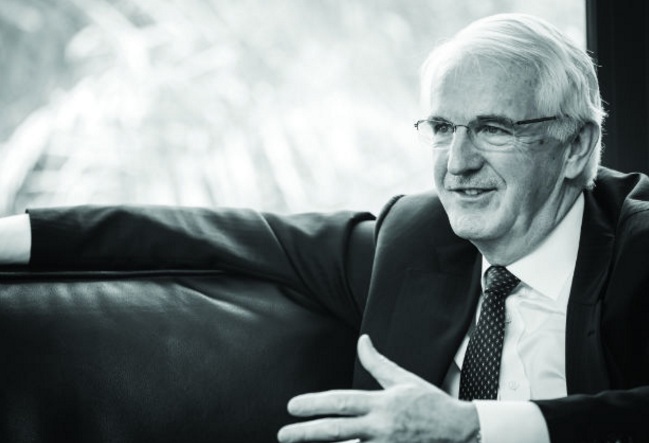 Jumeirah Group’s Gerald Lawless is to step down from his role as chief executive officer after 18 years of building Dubai’s flagship hospitality company.

The group’s parent company Dubai Holding announced on Monday that Lawless will take over responsibility for its tourism and hospitality strategy.

Lawless, who made Jumeirah a global brand, with 23 hotels in 12 destinations from London to Shanghai, will become the honorary president of the group in recognition of his work.

Lawless has 30-years of experience in the Dubai leisure industry and has spearheaded the United Arab Emirate’s drive to become a leading luxury tourism hub.

Some of Dubai’s most iconic hospitality landmarks, from the Burj Al Arab hotel to the Madinat Jumeirah complex, and the Wild Wadi waterpark, were launched under his leadership.

The Irishman spoke of Jumeirah’s global ambitions in an exclusive interview with Gulf Business last year.

He said: “I would say very confidently that by 2020 we should be looking at somewhere in the region of 45 or 46 hotels in operation. With other discussions like letters of agreement and management meetings we are having, we are touching on the 70 mark across the world. Our 10-year strategy says we will look to have approximately 75 Jumeirah hotels worldwide by say 2023.”

Lawless will be replaced by Stefan Leser, who has spent the last 10 years in senior executive positions at Kuoni, the Swiss-based travel business.

Leser said: “It’s a great honour to join Jumeirah; one of the world’s most prestigious hospitality brands and a major contributor to Dubai’s phenomenal success story. I look forward to working closely with Jumeirah’s talented team as we continue to grow our international portfolio, build our range of brands and deliver ever better services to our guests and business partners.”

Dubai Holding chairman Mohammad Abdulla Al Gergawi added: “We appreciate the role that Gerald has played as the founding CEO of the Jumeirah Group and its subsequent expansion.

“As a tireless ambassador for tourism and hospitality in Dubai, he is a leader admired across the industry for his commitment to innovation and excellence in the field of luxury hospitality and has been an inspiration to Jumeirah employees, to guests and to other stakeholders in the sector.

“Jumeirah Group has been a consistently valuable engine of international growth for Dubai Holding and its future expansion will further enhance that impact. We are delighted to have the opportunity of benefiting from Gerald’s expertise in building our own integrated vision for the hospitality sector.

“In recognition of Gerald’s contribution to the success of Jumeirah, he will hold the title of honorary president of the Jumeirah Group and chancellor of the Emirates Academy of Hospitality Management.”

Commenting on his new role, Lawless said: “It has been an immense honour and privilege to have been entrusted with setting up the Jumeirah Group, with the development of its outstanding portfolio of luxury hotels and other businesses and the promotion of the brand internationally.

“I would like to express my thanks to His Highness Sheikh Mohammed bin Rashid Al Maktoum for giving me this opportunity, to Dubai Holding for their support over the years and to the company’s 14,000 colleagues who have made Jumeirah what it is today. As I move forward into a new set of responsibilities at Dubai Holding, I look forward to a smooth transition with Stefan, and also to assuming the chairmanship of the World Travel and Tourism Council in April 2016.”