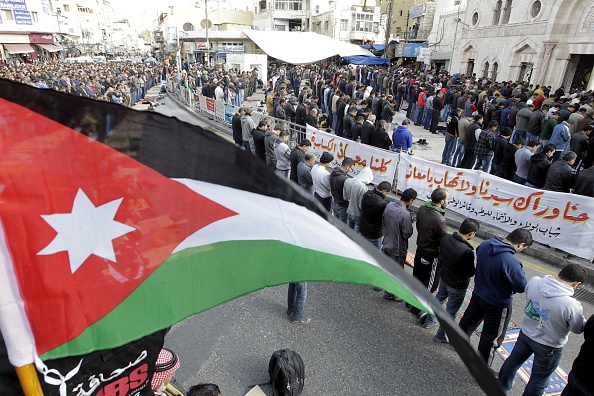 Jordan hanged two Iraqi jihadists on Wednesday including a female militant in response to an Islamic State video showing a captured Jordanian pilot being burnt alive by the hardline group.

Islamic State had demanded the release of the woman, Sajida al-Rishawi, in exchange for a Japanese hostage whom it later beheaded. Sentenced to death for her role in a 2005 suicide bomb attack in Amman, Rishawi was executed at dawn, a security source and state television said.

Jordan, which is part of the U.S.-led alliance against Islamic State, has promised an “earth-shaking response” to the killing of its pilot, Muath al-Kasaesbeh, who was captured in December when his F-16 crashed over northeastern Syria.

Jordan also executed a senior al Qaeda prisoner, Ziyad Karboli, an Iraqi man who was sentenced to death in 2008.

The fate of Kasaesbeh, a member of a large tribe that forms the backbone of support for the country’s Hashemite monarchy, has gripped Jordan for weeks and some Jordanians have criticised King Abdullah for embroiling them in the US-led war that they say will provoke a militant backlash.

King Abdullah cut short an official visit to the United States on Tuesday. In a televised statement to the nation, he urged national unity and said the killing was a cowardly act of terror by a criminal group that has no relation to Islam.

There was widespread shock and anger in Jordan at the brutality of a killing that drew international condemnation.

Kasaesbeh’s father said the two executions were not enough and urged the government to do more to avenge his death.

“I want the state to get revenge for my son’s blood through more executions of those people who follow this criminal group that shares nothing with Islam,” Safi al-Kasaesbeh told Reuters.

“Jordanians are demanding that the state and coalition take revenge with even more painful blows to destroy these criminals,” he said.

The Jordanian army has vowed to avenge his death, and some analysts believe it could escalate its involvement in the campaign against Islamic State, which has seized large areas of Iraq and Syria, Jordan’s neighbours to the north and east.

In the pilot’s home village of Ay, mourners said Jordanians must rally around the state. “Today we put our differences behind us and rally behind the king and nation,” said Jabar Sarayrah, a shopkeeper.

The prisoners were executed in Swaqa prison, 70 km (45 miles) south of Amman, just before dawn, a security source who was familiar with the case said. “They were both calm and showed no emotions and just prayed,” the source added without elaborating.

Rishawi, in her mid-forties, was part of an al Qaeda network that targeted three Amman hotels in suicide bombings in 2005. She was meant to die in one of the attacks – the worst in Jordan’s history – but her suicide bomb belt did not go off.

Jordan said on Tuesday the pilot had been killed a month ago. The government had been picking up intelligence for weeks that the pilot was killed some time ago, a source close to the government said.

Disclosing that information appeared to be an attempt to counter domestic criticism that the government could have done more to strike a deal with Islamic State to save him.

“The horror of the killing, the method of killing is probably going to generate more short-term support for the state,” said a Western diplomat. “But once that horror dies down, inevitably some of the questions revert on Jordan’s role in the coalition.”

The Jordanian pilot is the first from the coalition known to have been captured and killed by Islamic State.

Jordan is a major U.S. ally in the fight against hardline Islamist groups and hosted U.S. troops during operations that led to the invasion of Iraq in 2003. It is home to hundreds of U.S. military trainers bolstering defences at the Syrian and Iraqi borders, and is determined to keep the jihadists in Syria away from its frontier.

Jordanian state television broadcast archive footage of military manoeuvres with patriotic music, with a picture of Kasaesbeh in uniform in the corner of the screen.

US officials said on Tuesday the pilot’s death would likely harden Jordan’s position as a member of the coalition against Islamic State.

The Syrian government condemned the killing and urged Jordan to cooperate with it in a fight against Islamic State and the al Qaeda-linked Nusra Front in Syria. The United States has ruled out Syria as a partner in the campaign against Islamic State, describing President Bashar al-Assad as part of the problem.

Islamic State had demanded her release in exchange for the life of Japanese journalist Kenji Goto. However, Goto was beheaded by the group, video released last Saturday showed.

Jordan had insisted that they would only release the woman as part of a deal to free the pilot.