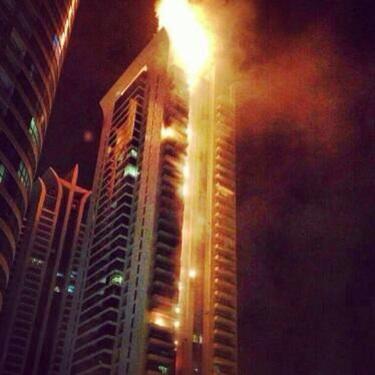 Following Sunday’s blaze that partially destroyed Tamweel Tower in Dubai’s JLT community, questions remain unanswered about the cause of the fire.

As the community falls under the ownership of Dubai Multi Commodities Centre (DMCC) Free Zone, the Dubai Municipality said it has no authority over free zones.

“Nobody has requested us to investigate the fire and we have no jurisdiction in free zones,” Marwan, the head of engineering supervision at the building department, told The National newspaper.

“But since we were called to the scene of the incident by the Civil Defence control room it is our procedure to file a report.”

The municipality’s inspectors have not yet entered the 34-floor tower.

Others have suggested the investigation will focus on whether the building’s materials – namely the type of cladding – accelerated the fire, causing it to spread across lower floors.

Videos and images taken by residents of Tamweel Tower and its neighbouring buildings show large amounts of flaming cladding falling from the top of the building, some landing on lower balconies.

Dubai Municipality has listed this type of cladding as a highly restricted material, requiring approvals from it and Civil Defence, and several inspections during installation.

Al Mohammed said that even if the installation was not in compliance with the municipality’s procedures, there might be nothing officials can do.

A statement released yesterday by Tamweel said it would continue to serve its customers through its Deira and Abu Dhabi offices.
“We will continue to work closely with the Civil Defence, and will continue to provide such updates as and when appropriate.”