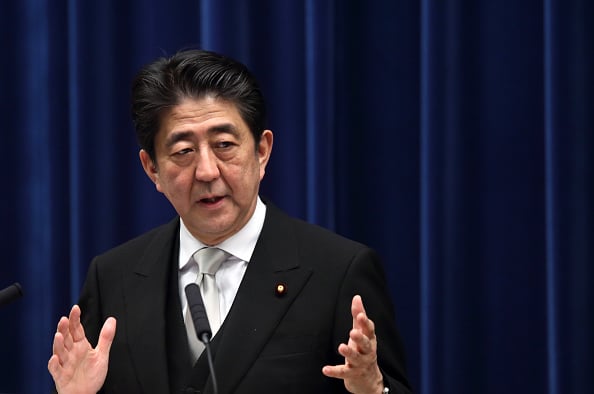 Japanese Prime Minister Shinzo Abe on Sunday called the killing of a Japanese captive by Islamic State militants “outrageous” and again demanded the group release a second Japanese national they are holding.

Abe, speaking to public broadcaster NHK, said chances were high that a recording and an image of what appeared to be the decapitated body of captive Haruna Yukawa, which emerged late on Saturday, were authentic.

But he reiterated that Japan would not give in to terrorism.

“Such an act of terrorism is outrageous and impermissible, which causes me nothing but strong indignation,” Abe said. “Again, I strongly demand that Mr. Kenji Goto not be harmed and be immediately released.”

The escalation of the hostage crisis has become a test for Abe, who took power in 2012 pledging to bolster Japan’s global security role. On Tuesday, Islamic State militants released a video showing Goto and Yukawa kneeling with a knife-wielding, masked man demanding a $200 million ransom for their release. A 72-hour deadline for that payment expired on Friday.

In the latest recording, Goto says Yukawa was “slaughtered in the land of the Islamic Caliphate.” But the journalist said the Japanese government could save him by working through Jordan where Abe earlier this week set up an office to coordinate the government’s response to the hostage situation.

Goto says the militants would free him in exchange for the release of Sajida al-Rishawi, an Iraqi held in Jordan, and that the militants have dropped the ransom demand.

“I am filled with disappointment, that it has finally come to this,” Yukawa’s father, Shoichi, told NHK. “I feel pained, that he (Goto) risked his life out of concern (for my son) and ended up being captured. I hope he can be released as soon as possible, and return to Japan to continue his activities.”

Goto’s mother, Junko Ishido, told NHK: “First of all I wish it weren’t true, that it’s some mistake. I’m a mother so it’s unbearable. What I want to tell Islamic State is that Kenji’s ideal is world peace.” She was later quoted by Kyodo news agency as doubting her son would seek a prisoner exchange.

More than 100 people congregated at Tokyo’s Denenchofu Protestant evangelical church, where Goto was baptised in 1997 and where he prayed just days after Yukawa was captured in August. Three policemen stood guard outside the church.

“Please have Kenji Goto and Haruna Yukawa in your thoughts as we go through today’s prayers,” Pastor Shun Takatsu said.

Abe told NHK he had spoken to Jordan’s King Abdullah about the situation, but he had no comment on the Islamic State demand for the release of al-Rishawi.

U.S. President Barack Obama condemned Yukawa’s “brutal murder” in a statement released by the White House, and later called Abe to express his condolences and thank him for the humanitarian aid Japan has provided to the Middle East.

French President Francois Hollande in a statement also condemned what he called the “barbaric killing,” while Australian Prime Minister Tony Abbott, who has forged closer security ties with Japan, called it an “absolute atrocity”.

“All this means is it’s more important than ever to do everything we can to disrupt and degrade the death cult,” Abbott added in a statement from Canberra.

Yukawa, 42, was seized by militants in August after going to Syria to launch a security company. Goto, 47, went into Syria in late October seeking to secure Yukawa’s release, according to friends and business associates.

The new recording, released on YouTube late on Saturday before being deleted, showed an image of a gaunt Goto in an orange t-shirt with audio of what appeared to be him making a statement in English.

“I would like to stress how easy it is to save my life,” the recording says. “You bring them their sister from the Jordanian regime, and I will be released immediately. Me for her.”

Al-Rishawi was arrested shortly after she failed to blow herself up in one of three deadly hotel bombings that hit the Jordanian capital in 2005.

Japan paid $6 million to Japanese Red Army hijackers after a 1977 kidnapping, but in recent years has moved toward the U.S. government’s hard line against paying ransoms.

Japan’s pacifist constitution also rules out any military response. A briefing paper prepared for Abe’s office on Friday and reviewed by Reuters said Japan would not have the legal authority to strike the Islamic State even after proposed legislation loosening military restrictions that the prime minister is seeking to pass later this year.

Abe told NHK that Japan did not intend to join the U.S.-led military operation against Islamic State, but wanted to continue to provide humanitarian aid. The decision by Abe to give aid specifically to countries contending with Islamic State has raised some eyebrows.

“I think it’s unavoidable if they (Islamic State) took this as support for their enemies and view Japan as an enemy,” Ichiro Ozawa, leader of the small opposition People’s Life Party, told NHK, adding the government appeared not to know how to respond.

The Islamic State has executed five British and American aid workers and journalists in recent months. Yukawa’s capture by Islamic State fighters outside Aleppo in August was the first time a Japanese citizen has been held by the group.