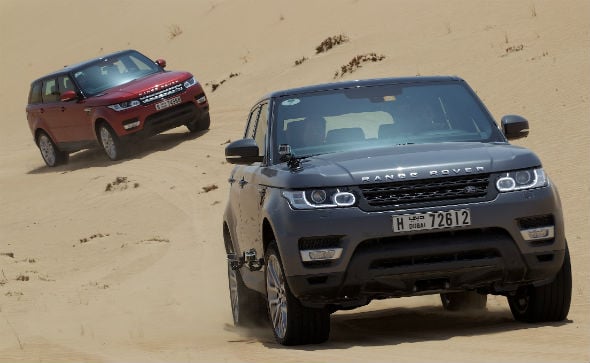 Jaguar Land Rover MENA has reported a record-breaking year for 2013 with sales up 46 per cent on 2012, comprehensively beating the company’s global sales performance of 19 per cent.

Land Rover sales in the region were up 49 per cent on the previous year led by the Range Rover model, the brand’s best-selling vehicle, while the Range Rover Sport saw sales rise 25 per cent thanks in part to the launch of the new model.

Jaguar sales saw a year-on-year increase of 30 per cent including a 43 per cent rise in December alone. The XJ model was up 38 per cent with sales of the XF rising 19 per cent.

Justin Weaving, regional sales director for Jaguar Land Rover MENA, said: “2013 has been an outstanding year for us here in the MENA region, thanks in part to the successful launch of two stunning new products – the Jaguar F-TYPE and the All-New Range Rover Sport.

“These results are a clear demonstration of the overwhelming desire this region has for both our brands and our portfolio of luxury vehicles, and the success of our unwavering focus on design, technology and customer service.”

In a statement the company said the Jaguar F-Type, the brand’s first two-seater sports car in 50 years, “delivered against the company’s high expectations and is on track to exceed its targeted share of the sports car segment.”

Weaving added: “I am confident this performance will continue in 2014 as we see the full effect of our recently introduced 14MY line-up, hotly anticipated new products such as the Jaguar F-TYPE Coupe and strategic actions to further strengthen our regional dealer network.”