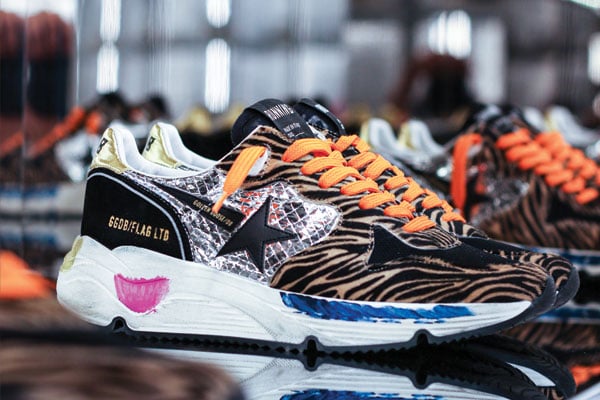 Scuffed sneakers were generally regarded as a sign of living rough – that’s until Golden Goose entered the sneaker market in 2007. Its artisanally distressed box-fresh skate- and basketball-style kicks made the worn-in look a signature aesthetic of the brand.

Venice-based couple Alessandro Gallo and Francesca Rinaldo started Golden Goose in 2000. But from 2000 until 2007, they were a fringe player in the industry. The Venetian area had skilled craftsmen who specialised in working with leather and hence one of Golden Goose’s biggest calling cards before sneakers were its leather jackets and boots.

The couple ran the creative and business side of the brand, and as a result, were constantly travelling. That’s when they decided they needed sneakers that weren’t like anything else on the market at the time – handmade pairs that shunned industrial processes and instead relied on the same level of craft and skill used to make formal leather shoes. 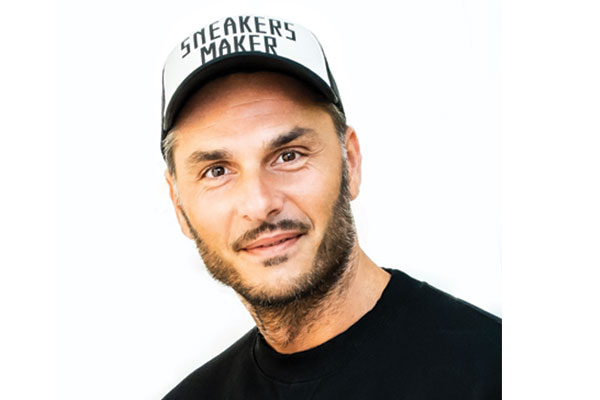 They turned to several formal shoe-makers in and around Venice, but only one obliged. “Golden Goose was the first company that started the inversion of all these traditional manufacturers in the Venetian area who were formal shoemakers but then became sneaker makers.

Campara’s association with Golden Goose has been pivotal to its success story. In the Noughties, he started working on the business side of powerhouses like Alexander McQueen and later on with Giorgio Armani where he helped set up its expansive retail operations in Asia. But, as Campara explains, he was doing more than helping these brands generate turnover – he found himself enhancing their brand value too.

By 2009, when big-ticket strategic investments in the fashion world were the order of the day – for example, The Carlyle Group had recently acquired a stake in Moncler – it was his cue to move to Style Capital, an investment fund focused on fashion brands.

Four years later, even more confident about his investment acumen, he decided to take the ultimate gamble and invest his own money – all of it – into Golden Goose. He became the Commercial Director of the brand that, at the time, had a turnover of €20m. “This year we’re going to deliver more than €250m in turnover, and next year we’re going to reach €500m.”

How did Golden Goose become so wildly successful? Campara puts it down to three main factors. Firstly, it was just ahead of the zeitgeist, perfectly positioned to ride the sneaker culture that began to boom around five years ago and which saw people trading in high heels and formal leather shoes for more relaxed sneakers.

Those manufacturers are all based in Venice. A few of them had small workshops. Golden Goose ensured that those manufacturers expanded, helping them secure bank loans as well. “At the beginning, 100 people were working in the factory for Golden Goose, now there are more than 2,000 people.” He adds that it would have been easy to shift production to China, but he believes that doing so would be a mistake as the products wouldn’t have the same durability or quality as has been maintained by keeping production in Venice.

Thirdly, there were a series of smart decisions that ensured its brand value increased as rapidly as its turnover. To that end, marketing was always discreet – more word-of-mouth with celebrities like Taylor Swift, Jude Law and Selena Gomez being photographed wearing pairs of one of luxury’s best-kept secret. 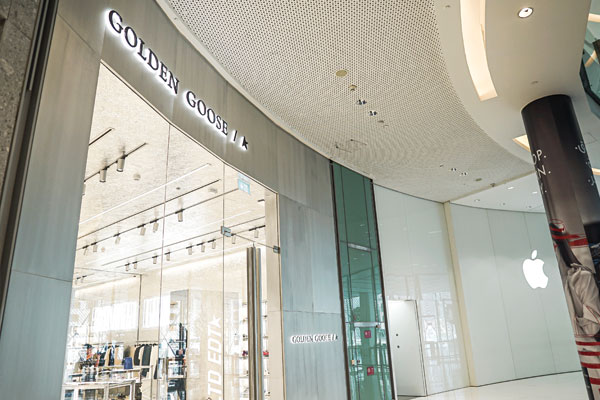 That Golden Goose rebranded formally to Golden Goose Deluxe Brand a few years ago helped cement its positioning in the pecking order. Also, there was constant scarcity maintained around the brand. “When a woman comes into a store and asks for a size 38 of a particular shoe, she immediately asks how many size 38s are there because she wants to make sure that there are not many of them and this is part of our strategy,” says Campara. He also has the backing of industry rockstars to script the brand’s success story. Washington DC-based private equity firm, The Carlyle Group, the same house that bet on Supreme, acquired 100 per cent of Golden Goose two years ago. “Carlyle has been dramatically important for our retail expansion and to set up our direct operations online. Carlyle has experience with mega brands like Moncler and Supreme. They never oblige you, they only give you a point of view.”

Lending Campara a distinct perspective on running Golden Goose, is his friend and Gucci’s former CEO and chairman, Patrizio di Marco, who joined as chairman of Golden Goose last year. “I can bring the company to $1bn one day. I have the vision, energy and skill to do that. But it’s more important for a young manager [like me] to have the point of view of someone who has already brought a brand to $1bn and that’s what I’m thankful for to Patrizio,” explains Campara of his relationship with Di Marco.

Campara took over as CEO of Golden Goose last year, at the same time that Di Marco was appointed as chairman. There’s been a focused expansion on increasing its footprint worldwide, and the Middle East is a major part of that strategy.

In the Middle East, Golden Goose already had a store in Beirut. In Dubai, it used to retail through Chalhoub’s multi-brand Level Shoes boutique in The Dubai Mall. In June though, it opened its first standalone boutique in the UAE located at The Dubai Mall at possibly the mall’s most enviable location, a prime spot of real estate right next to the Apple store. In addition to the brand’s sneakers, the new flagship also hosts the entire collection of its ready-to-wear collection and accessories for men, women and children.

Called the Golden Goose FLAG/Dubai store, it is one of only three other boutiques in the world – the others being in Milan and Tokyo – which has showcased the brand’s The Lab concept. The Lab is an in-store personalisation experience where customers can see the sneaker maker manufacture sneakers and also allow customers to personalise their sneakers. “[After Milan] we decided to open The Lab in Tokyo because no one is into craftsmanship and handmade items more than the Japanese and then we decided to open in Dubai because no one in the Middle East loves customised items more than people in Dubai.

Golden Goose also has special-edition sneakers for its flagships around the world. The ‘dubai LTD1’ from the Hi Star collection and ‘dubai LTD 2’ from the Running Sole collection range from Dhs2,000 to Dhs6,335 that include fittingly extravagant flourishes like leather covered in Swarovski crystals and silver mirror inserts. 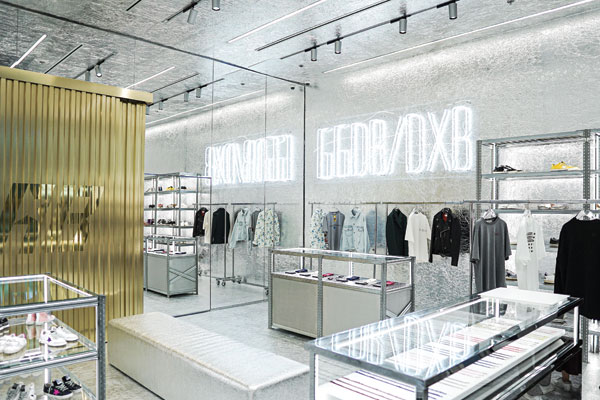 He says that America and China are his two biggest markets, with the business equally spread across major territories. America accounts for 33 per cent of its business, Europe and the Middle East another 33 per cent and the remaining is in Asia. Campara expects 100 Golden Goose boutiques across the world by the end of this year and another 110 by 2022-2023.

Alongside a brick-and-mortar acceleration, he’s also bullish of driving the brand’s e-commerce division. E-commerce is expected to account for 30 per cent of its turnover by the end of 2020. But he doesn’t want their online presence to be merely a revenue-driven tool. “People want to know more about Golden Goose. Us being a secret for so long is part of our charm. People can now discover us online, understand our brand and even purchase our products. But, it’s never about just selling.”

“We recently launched our first new collection of bags online. The first round of 200 bags sold out in four days.” He adds that the new collection will debut in September, though the focus on the new product category will not come at the expense of its sneakers which will remain a mainstay at the brand.

Ultimately, Campara is also pushing an entire sneaker culture that focuses on craftsmanship and even bespoke offerings shortly. “You will have a chance to directly book our artisans and let him come to your house and make sneakers for you and friends in your home.

“Several customers were asking me if they could learn about making handmade sneakers. Therefore, we are going to open a school in Venice where we teach people to become artisans making the skill set of working with one’s hand that wasn’t cool for this generation, cool once again. Our school will have the largest library of sneakers in the world.”

In 2014, Golden Goose caught the attention of Virgil Abloh who had just launched his streetwear label off-White. Golden Goose was Off-White’s first-ever collaboration. “He [Virgil] learnt a lot about sneakers from us. He started to use everything he learnt at Golden Goose with Nike. In 2014, Virgil was unknown. The brand Off-White was super small. Now, look where he is,” says Campara of Abloh, now the menswear artistic director at Louis Vuitton.

When Abloh takes notice of a brand, you know that it’s about time you should too.