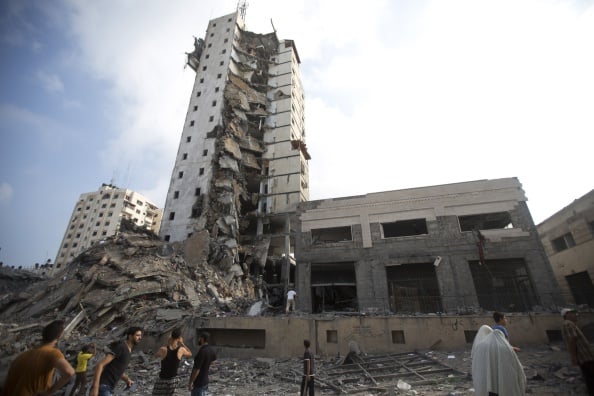 Israel bombed more of Gaza’s tallest structures on Tuesday, bringing down a 13-storey apartment and office tower and destroying most of a 16-floor residential building after warning occupants to get out.

The Israeli military, declining to comment specifically on the attacks that flattened the Basha Tower and wrecked the Italian Complex, said it attacked 15 “terror sites”, including some in buildings that housed Hamas command and control centres.

Hamas, the dominant militant group in the Gaza Strip, accused Israel of an “unprecedented act of revenge against civilians” aimed at deterring Palestinians from supporting the Islamist movement.

A Hamas official, Osama Hamdan, said Egypt had proposed a new ceasefire and was waiting for Israel to respond, after a five-day truce and indirect Israeli-Palestinian talks in Cairo on a durable Gaza agreement collapsed a week ago.

Locked in a seven-week-old war and vowing to end rocket fire from the enclave, Israel has now attacked three of Gaza’s most prominent high-rise buildings since Saturday, when it destroyed the 13-storey Al Zafer Tower.

No fatalities were reported in those bombings, which were preceded by non-explosive warning missiles that sent residents fleeing. Twenty people were wounded in the attack on the Italian Complex building, and two others were killed in Israeli strikes elsewhere in the Gaza Strip, medical officials said.

Cairo’s latest initiative, Palestinians officials said, called for an indefinite halt to hostilities, the immediate opening of Gaza’s blockaded crossings with Israel and Egypt and a widening of the enclave’s fishing zone in the Mediterranean.

Under a second stage that would begin a month later, Israel and the Palestinians would discuss the construction of a Gaza sea port and an Israeli release of Hamas prisoners in the occupied West Bank, the officials said.

Both Israel and Egypt view Hamas as a security threat and are demanding guarantees that weapons will not enter the economically crippled territory.

An Israeli official speaking on condition of anonymity said Israel would consider an Egyptian proposal once assured that Hamas was ready to accept it.

Speaking on Al-Arabiya television, Hamdan said: “Returning to negotiations must be linked to a position that includes guarantees and clear Israeli concessions.”

Separately, the United States has begun preparing its own draft outline for a proposed United Nations resolution to demand a ceasefire, working alongside European powers and Jordan on a final draft, diplomats said.

Palestinian health officials say 2,125 people, most of them civilians, including more than 490 children, have been killed in Gaza since July 8, when Israel launched an offensive with the declared aim of ending the rocket salvoes.

Sixty-four Israeli soldiers and four civilians in Israel have been killed.

Thousands of homes in the Gaza Strip have been destroyed or damaged in the conflict. Nearly 500,000 people have been displaced in the territory where Palestinians, citing Israeli attacks that have hit schools and mosques, say no place is safe.

Israel has said Hamas bears responsibility for civilian casualties, because it operates among non-combatants. The group, it said, uses schools and mosques to store weapons and as launch sites for cross-border rocket attacks.