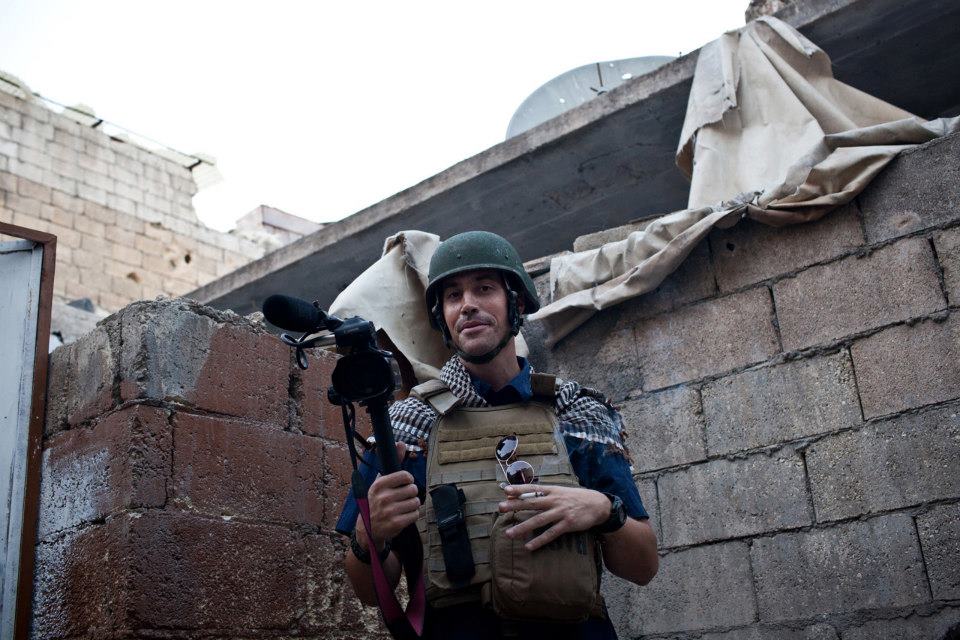 Islamic State insurgents posted a video on Tuesday purportedly showing the beheading of U.S. journalist James Foley and images of another U.S. journalist whose life they said depended on how the United States acts in Iraq.

The video, titled “A Message To America,” presented President Barack Obama with bleak options that could define America’s next phase of involvement in Iraq and the public reaction to it, potentially deepening his hand in a conflict he built much of his presidency on ending.

Obama held back from making a public statement about the beheading until the video could be formally authenticated.

“If genuine, we are appalled by the brutal murder of an innocent American journalist and we express our deepest condolences to his family and friends,” White House National Security Council spokeswoman Caitlin Hayden said in a statement.

The video’s grisly message was unambiguous, warning of greater retaliation to come against Americans following nearly two weeks of U.S. air strikes that have pounded militant positions and halted the advance of Islamic State, which until this month had captured a third of Iraq with little resistance.

Posted on social media, the video brought a chilling and highly personal tone to a conflict that for many Americans had started to become all too familiar.

Foley, 40, was kidnapped by armed men on Nov. 22, 2012, in northern Syria while on his way to the Turkish border, according to GlobalPost, a Boston-based online publication where Foley had worked as a freelancer. He had reported in the Middle East for five years and had been kidnapped and released in Libya.

Steven Sotloff, who appeared at the end of the video, went missing in northern Syria while reporting in July 2013. He has written for TIME among other news organisations.

The video injected an unpredictable element into Obama’s deliberations on how far to proceed with U.S. air strikes against Islamic State targets in Iraq, though aides said his vow not to put U.S. combat forces on the ground in Iraq still held.

On a Facebook page for Foley, a message from his mother Diane Foley said: “We have never been prouder of our son Jim. He gave his life trying to expose the world to the suffering of the Syrian people.

“We implore the kidnappers to spare the lives of the remaining hostages. Like Jim, they are innocents. They have no control over American government policy in Iraq, Syria or anywhere in the world.”

Islamic State had not previously executed American citizens publicly. The video was posted after the United States resumed air strikes in Iraq this month for the first time since the end of the U.S. occupation in 2011.

Hostage crises have plagued U.S. presidents over the years.

Jimmy Carter’s presidency sagged under the weight of the Iran hostage crisis when Americans were held captive for 444 days. Ronald Reagan’s bid to get American hostages freed from Lebanon led to an arms-for-hostages Iran-Contra scandal that plagued his second term.

University of Virginia political scholar Larry Sabato said the current situation was more akin to the beheading of American journalist Daniel Pearl by al Qaeda leader Khalid Sheikh Mohammed in 2002. He said it could help bolster what appeared to be a growing perception among Americans that the United States will have to be more aggressive in dealing with Islamic State militants.

“WE ARE AN ISLAMIC ARMY”

The Sunni militant group, which has declared a caliphate in parts of Iraq and Syria in areas it controls, opened the video with a clip of Obama saying he had authorized strikes in Iraq.

The words “Obama authorizes military operations against the Islamic State effectively placing America upon a slippery slope towards a new war front against Muslims” appeared in English and Arabic on the screen.

It showed black and white aerial footage of air strikes with text saying “American aggression against the Islamic State”.

A man identified as James Foley, his head shaven and dressed in an orange outfit similar to uniforms worn by prisoners at the U.S. military detention camp in Guantánamo, Cuba, is seen kneeling in the desert next to a man standing, holding a knife and clad head to toe in black.

“I call on my friends, family and loved ones to rise up against my real killers, the U.S. government, for what will happen to me is only a result of their complacency and criminality,” the kneeling man says.

The man next to him, in a black mask, speaks in a British accent and says, “This is James Wright Foley, an American citizen, of your country. As a government, you have been at the forefront of the aggression towards the Islamic State.”

“Today your military air force is attacking us daily in Iraq. Your strikes have caused casualties amongst Muslims. You are no longer fighting an insurgency. We are an Islamic army, and a state that has been accepted by a large number of Muslims worldwide.”

Following his statement he beheads the kneeling man. At the end of the video, words on the side of the screen say, “Steven Joel Sotloff”, as another prisoner in an orange jumpsuit is shown on screen. “The life of this American citizen, Obama, depends on your next decision,” the masked man says.

The U.S.-based Committee to Protect Journalists estimates that approximately 20 journalists, both local and international, are currently missing in Syria. Many of them are believed to be held by Islamic State.

Islamic State also released a video on Tuesday that gave the strongest indication yet it might try to strike American targets. The video with the theme “breaking of the American cross” boasts Islamic State will emerge victorious over “crusader” America.

It followed a video posted on Monday, warning of attacks on American targets if Washington strikes against its fighters in Iraq and Syria.

Islamic State’s sweep through northern Iraq, bringing it close to Baghdad and in control of the second city, Mosul, drew U.S. air strikes that helped Kurdish peshmerga fighters regain some territory captured by the Sunni militants.

Buoyed by an operation to recapture a strategic dam from the militants after two months of setbacks, Iraqi army units backed by Shi’ite militias launched their offensive shortly after dawn on Tikrit, a city 130 km (80 miles) north of Baghdad which is a stronghold of the Sunni Muslim minority.

But officers in the Iraqi forces’ operations room said by mid-afternoon that the advance had stopped.

Islamic State has concentrated on taking territory for its self-proclaimed caliphate both in Syria, where it is also fighting the forces of President Bashar al-Assad, and in Iraq.

Coinciding with the Kurdish advances, Damascus government forces have stepped up air strikes on Islamic State positions in and around the city of Raqqa – its stronghold in eastern Syria.

Analysts believe Assad – who is firmly in control in the capital more than three years into the civil war – is seizing the moment to show his potential value to Western states that backed the uprising against him but are now increasingly concerned by the Islamic State threat.

Islamic State added new fighters in Syria at a record rate in July, according to the Syrian Observatory for Human Rights, which monitors the conflict. About 6,300 men – 80 per cent of them Syrian and the rest foreigners – joined last month, Rami Abdelrahman, founder of the Observatory, told Reuters.