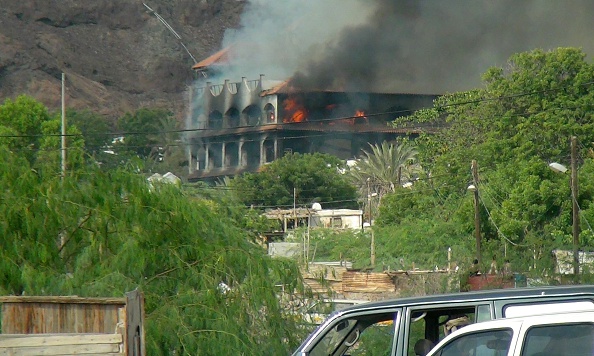 Islamic State suicide bombers killed 22 people in attacks on Yemen’s government and its Gulf Arab coalition ally in the port city of Aden and on a Houthi-run mosque in the capital Sanaa on Tuesday, the jihadist group and state media said.

It was the first known direct Islamic State assault on the Yemeni government and the Saudi-led coalition that intervened in the country’s civil war in March against Iranian-backed Houthi forces who had seized large areas of the country to that point.

In Sanaa, seven people were killed in the attack on the al-Nour mosque in the al-Nahda district of the Houthi-controlled capital, the Houthi-run state news agency said.

Claiming responsibility for the Sanaa bombing, Islamic State said in a statement that dozens of Houthis preparing to go to the battlefront had been killed or wounded.

The Sunni militant Islamic State is hostile to both the U.S.-backed Yemeni government and Arab coalition allies, as well as to the Shi’ite Muslim Houthis in Yemen’s complex conflict.

Islamic State jihadists had hitherto refrained from openly targeting Yemen’s government and the Saudi-led coalition now fighting together to roll back Houthi domination over large areas of the Arabian Peninsula state.

Vice President Khaled Bahah, who is also prime minister, and cabinet colleagues escaped unharmed from what he said were car bomb attacks in Aden, two of which targeted the al-Qasr hotel.

“Today’s attack does not affect anybody. On the contrary, it binds us together more,” he told a cabinet meeting afterwards in comments carried by Dubai-based al-Arabiya television.

“We had come here to work and we know that there are security gaps… But this now prompts us to do more in the framework of reinforcing security in a bigger way by the general security services and armed forces.”

“In a blessed operation facilitated by God, four martyrdom operations targeted a gathering of Saudi, Emirati and Yemeni officers,” Islamic State said in a statement.

Islamic State’s assault occurred with newly returned Yemeni authorities trying to restore order in Aden while government and Arab coalition forces thrust north and westwards with the ultimate goal of recapturing the capital Sanaa from the Houthis.

Sunni Islamist militants of various allegiances had tried to establish themselves in Aden but faced resistance from local militias. Islamic State, which is centred in Iraq and Syria, first emerged in Yemen in March with a series of suicide attacks on Shi’ite mosques in which 137 people died.

The suicide bombers in Aden were driving Yemeni army vehicles, a Yemeni military source told Reuters. UAE officials earlier in the day had blamed the Houthis and their ally, former president Ali Abdullah Saleh, for the attacks.

Houthi official Yahya Ali al-Qahoom distanced his group from the bombings. The Shi’ite Houthis have long accused Saudi Arabia and the Yemeni government of being allied to Sunni Muslim militants like Islamic State, something both deny.

“The blows which the invaders have received in Aden signal the depth of the struggle going on among factions and the intelligence agencies of the aggressor countries,” Qahoom said on his Twitter account, referring to the Saudi-led coalition.

Islamic State distributed pictures on Twitter showing smiling men it said were the suicide bombers and the hotel at the moment it was hit by a big orange fireball.

Salem al-Yazidi, a fighter in a local militia allied with President Abd-Rabbu Mansour Hadi, who remains in sanctuary in Saudi Arabia, described chaotic scenes when he rushed to aid the victims of the blast at the plush al-Qasr hotel.

“There was a big hole in the ground and what looked like the limbs of the bomber around it,” Yazidi told Reuters.

The Houthis are locked in ground fighting with Yemeni and Gulf Arab forces and also in the cross-hairs of daily Saudi-led air strikes. In the biggest blow yet to the coalition, the Houthis killed over 60 Gulf Arab troops in a rocket attack in Marib, east of Sanaa, last month.

The plush al-Qasr hotel is serving as informal headquarters of Yemen’s government and of Emirati troops based in Aden.

Rajeh Badi, spokesman for the Yemeni government, said it would remain in Aden to carry on its duties for the time being.

Hadi’s government has demanded the Houthis recognise its authority and withdraw from several cities, including Sanaa, which they seized last year. United Nations efforts to settle the conflict have made little progress.

In a separate attack in eastern Yemen, a local official said forces loyal to Hadi foiled an attempt by al Qaeda militants on Tuesday to seize facilities at the al-Masilah oilfield in Hadramout province. The official said there were casualties on both sides in the gunfight but provided no further details.