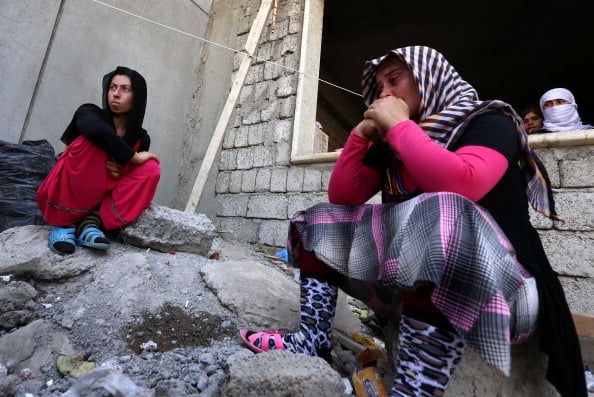 Mohammed Shia al-Sudani said the Sunni militants had also buried alive some of their victims, including women and children. Some 300 women were kidnapped as slaves, he added.

“We have striking evidence obtained from Yazidis fleeing Sinjar and some who escaped death, and also crime scene images that show indisputably that the gangs of the Islamic States have executed at least 500 Yazidis after seizing Sinjar,” Sudani said in a telephone interview, in his first remarks to the media on the issue.

Sinjar is the ancient home of the Yazidis, one of the towns captured by the Sunni militants who view the community as “devil worshipers” and tell them to convert to Islam or face death.

A deadline passed at midday on Sunday for 300 Yazidi families to convert to Islam or face death at the hands of the militants. It was not immediately clear whether the Iraqi minister was talking about the fate of those families or others in the conflict.

“Some of the victims, including women and children were buried alive in scattered mass graves in and around Sinjar,” Sudani said.

The minister’s comments could pile pressure on the United States – which has carried out air strikes on Islamic State targets in response to the group’s latest push through the north – to provide more extensive support.

“In some of the images we have obtained there are lines of dead Yazidis who have been shot in the head while the Islamic State fighters cheer and wave their weapons over the corpses,” said Sudani. “This is a vicious atrocity.”

The Islamic State, which has declared a caliphate in parts of Iraq and Syria, has prompted tens of thousands of Yazidis and Christians to flee for their lives during their push to within a 30-minute drive of the Kurdish regional capital Arbil.

Earlier in their push through northern Iraq, Islamic State, which also considers all Shi’ites heretics who must repent or die, boasted of killing hundreds of captive Shi’ite soldiers after capturing the city of Tikrit on June 12. They put footage on the Internet of their fighters shooting prisoners.

The Yazidis, followers of an ancient religion derived from Zoroastrianism, are spread over northern Iraq and are part of the country’s Kurdish minority.

Many of their villages were destroyed when Saddam Hussein’s troops tried to crush the Kurds during his iron-fisted rule. Some were taken away by the executed former leader’s intelligence agents.

Now they are on the defensive again. Tens of thousands of Yazidis fled for their lives after Kurdish fighters abandoned them in the face of Islamic State militants, and are trapped on a mountain near Sinjar at risk of starvation.

“We spoke to some of the Yazidis who fled from Sinjar. We have dozens of accounts and witness testimonies describing painful scenes of how Islamic State fighters arrived and took girls from their families by force to use them as slaves,” Sudani said.

“The terrorist Islamic State has also taken at least 300 Yazidi women as slaves and locked some of them inside a police station in Sinjar and transferred others to the town of Tal Afar. We are afraid they will take them outside the country.”

“The international community should submit to the fact that the atrocities of the Islamic State will not stop in Iraq and could be repeated somewhere else if no urgent measures were taken to neutralise this terrorist group,” Sudani said.

“It’s now the responsibility of the international community to take a firm stand against the Islamic State to reach a consensus on a legitimate decision to start the war on Islamic State to stop genocides and atrocities against civilians.”

The militant group, which arrived in northern Iraq in June, has routed Kurds in its latest advance, seizing several towns, a fifth oilfield and Iraq’s biggest dam – possibly gaining the ability to flood cities and cut off water and power supplies.