The first day of the Islamic New Year is likely to fall on Thursday, September 21, according to the calendar for Hijri 1439 released by the UAE on Monday.

According to the calendar, the first day of Muharram falls on September 21, 2017. 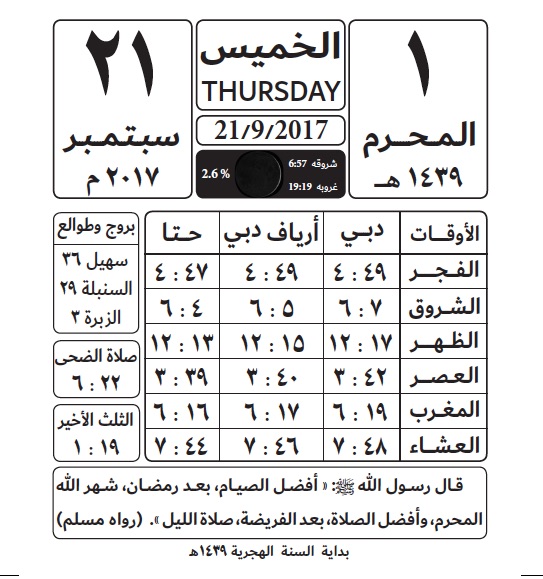 The new unified Hijri calendar is based on Sharia and astronomical principles, Ahmed Juma Al Za’abi, Deputy Minister for Presidential Affairs, and chairman of the Sheikh Zayed Grand Mosque Centre, said at a press conference.

“The project is a result of three years of comparative field studies and review of industry best practices by a group of UAE, Arab and Islamic scholars, and specialists in physics, space and astronomy, specialised committees and work groups,” official news agency WAM quoted him as saying.

“The project will cover all emirates, taking into consideration sharia conditions and scientific results that affect calculation of prayer timings.”

Dr. Mohammed Matar Al Kaabi, Chairman of the General Authority of Islamic Affairs and Endowments, said the Hijri calendar is important for every Muslim as it sets the time for two of the key pillars of Islam: prayer and fasting of Ramadan.

Chairman of Arab Astronomical Association and chancellor of the University of Sharjah Professor Hamid Al-Naimiy said the that calendar – which features timings for prayers and beginnings of Hijri months – took into consideration physical, aerial, environmental and geographical factors.

“These calculations cover all areas and cities in line with latitude and longitude coordinates and daily sunrise and sunset,” he said.

The UAE has announced that public and private sector workers in the country will receive the first day of Muharram as holiday for Islamic New Year.

Some companies in the UAE have already given their employees Thursday off.

However, the exact date will be confirmed by the official moon-sighting committee.