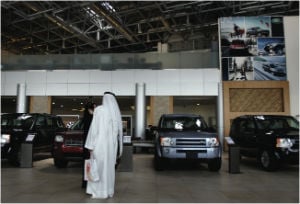 In the current economic climate, the dynamics of lending in the UAE are predictably changing. And in the process, it seems like an interesting new trend has emerged in the automotive sector.

Experts say that Islamic banks are now seen as the preferred option for auto financing in the country.

“Our funding tends to be split 60 per cent via Islamic facilities and 40 per cent conventional loans,” said Steve Faulkner, the managing director of Al-Futtaim’s Automotive Financial Services. Al-Futtaim Motors, which handles the distribution of international vehicle brands such as Toyota, Lexus and Hino in the UAE, has partnerships with 15 banks in the country, eight of which are Islamic.

“This [trend] has been stable for the past three years – prior to 2008 the mix would have been 40 per cent Islamic and 60 per cent conventional, possibly mirroring the higher proportion of new expats arriving into the market,” said Faulkner.

“Conventional banks would have stopped new lending to this segment due to their past experience as well as their preoccupation with repairing their balance sheets,” he said. “Secondly, Islamic banks were happy to take up the space left by conventional banks as auto finance is an asset-backed transaction, and hence fits well with the business model of an Islamic bank.”

The Islamic finance industry has grown rapidly in the last few years, and is expected to be worth $1.8 trillion by the end of 2016 – up 90 per cent from $939 billion in 2010, according to a report by Deutsche Bank. International Monetary Fund figures show that between 2007 and 2009, Islamic banks’ assets grew an average of twice as fast as conventional banks’ assets in major Muslim markets.

But the industry is still looking to break new ground. According to Hussain Al Qemzi, CEO of Noor Islamic Bank, the industry’s pace of development is “too slow”. Speaking recently at the International Islamic Finance Summit in Kuala Lumpur, he urged industry practitioners to challenge the regulators – central Banks, legal structures and Shari’a scholars – and create new products.

With the Islamic finance industry hunting for new opportunities, the UAE’s automotive sector is emerging as a lucrative target.

A study by the UAE’s ministry of foreign trade found that the country’s automotive market grew by 19.7 per cent in 2010 to reach $11.1 billion, up from $9.2 billion in 2009. Domestic car sales are predicted to see a compound annual growth rate of eight per cent until 2014.

Experts from Noor Islamic Bank say that the bank already faces fierce competition with big players in the UAE’s automotive market, both in terms of pricing and product features. The bank hopes to tempt customers with new campaigns. But like conventional banks, Noor has stringent criteria for lending.

Requirements include a minimum salary of Dhs5,000; no defaults on any products from other banks; a debt burden of less than 50 per cent; and three months’ bank statements, among others.

“We have a good portfolio in autos, and losses are minimal,” a Noor spokesperson confirmed.