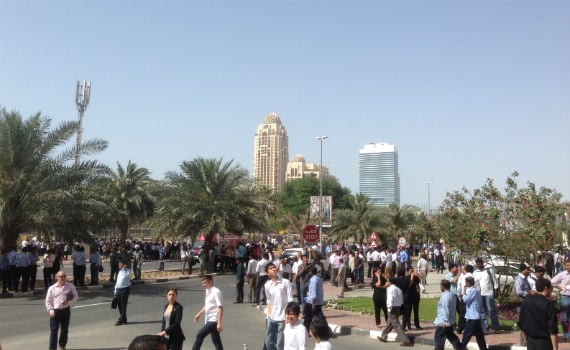 As thousands of people poured out into Dubai’s streets on Tuesday, leaving their high-rise offices in a mild state of panic as the region endured its second earthquake in as many weeks, many were left wondering the same thing: are Dubai’s tall buildings built to withstand an earthquake?

Fear not. Despite what many might assume, partly given the speed at which areas like the Marina and Downtown were built as well as the several fires across the emirate’s skyscrapers of late, experts have confirmed that Dubai’s buildings not only meet the required safety levels but in some cases even over-compensate.

Bart Leclercq, head of stuctures design at WSP Middle East – the company behind high-rise buildings such as The Shard in London and the One World Trade Centre in New York, says all of Dubai’s skyscrapers have to meet stringent safety regulations throughout the design process, and simply would not be cleared for construction until they do so.

“When a structure is being designed, all engineering plans are submitted to an independent engineer who will review and approve the designs. The plans are then sent to the local authorities for further approval. During the process both the original designers and the reviewing party become jointly responsible for the design of the building.”

Global cities and their vulnerability to seismic activity are mapped on what is known as the Seismic Zone Factor, with zones rating from one to four – four being at most risk of a large earthquake and where cities such as Tokyo and California are ranked.

According to UBC 97, Dubai ranks below zone one. Despite this, Dubai Municipality requires that all buildings across the emirate are designed to higher zone safety levels.

Leclercq confirmed that Dubai’s buildings are constructed in accordance with a zone factor 2a rating. In other words, Dubai’s skyscrapers are not only prepared for an earthquake, they are slightly over designed.

“Classifying Dubai as a 2A is on the conservative side. They’re all pretty well covered. Dubai’s buildings can withstand an earthquake measuring around 6 to 6.5 on the Richter scale [the tremors in the UAE on Tuesday measured at between four and five].

“Yesterday was a heavy one for Dubai standards, it could be a while before we see another one. The likeliness of a big quake hitting Dubai is extremely low,” says Leclercq.

Office workers in high-rise buildings would undoubtedly have felt the swaying and shaking caused by the tremors on Tuesday. But movement is good – each building has its own level of stiffness and some minimal movement is compensated for.

“A big core in the middle of the building works together with columns on the outside and together they give a building its stiffness. Usually depending on the height of the building you can predict how great that stiffness needs to be.”

Leclercq explains when a building moves back and forth in one swaying motion, the time it takes to make one full sway is known as the ‘period’ and the higher a building is the longer the ‘period’ may last.

“A general rule of thumb is if a tall building is designed well, you count the total number of floors, divide that number by 10 and that gives you an idea of what the ‘period’ of that building should be.”

That means if you were in the world’s tallest building, the Burj Khalifa in Downtown Dubai on Tuesday afternoon, the movement would have been subtle.

“I think you would probably feel it less,” Leclercq says. “You have around 200 floors when you include the spire at the top, so its period would be 20 seconds. That means it would take one minute to rock back and forth three times.”

Leclerq commented that he watched a video recently taken from within the Burj Khalifa while a thunderstorm raged outside. He counted 12 seconds for each period, meaning that the structure is extremely stiff and safer than is required, from a structural point of view.

“I was delighted when I saw the video. The Burj Khalifa is even stiffer than I thought it would be, twice as stiff almost. It is a fantastic structure.”

What to do in an earthquake

Leclerq says that the first thing to do is not panic. “If you’re in Dubai you are okay, because the buildings are built to withstand tremors. Stay calm and walk slowly towards the core of the building to the fire escape and exit through the stairwell.

“The stairwell is usually part of the core so it is in a strong structural element of the building. There is no reason to panic.”