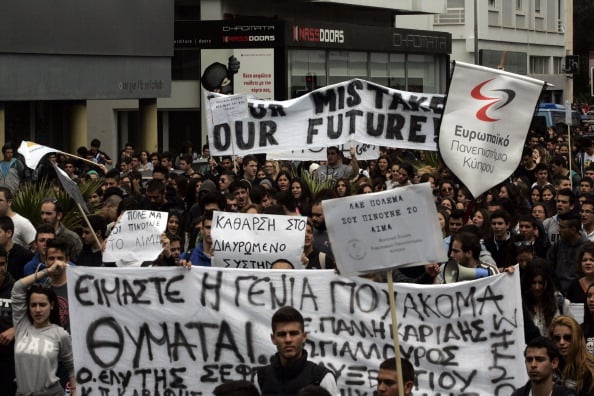 News of Cyprus’ EUR10 billion bailout hit the wires last week and since then, the unfolding events thereafter have been nothing short of watching a car crash. First, Cypriot banks went into a two-week lockdown and then something that is unprecedented in the Eurozone happened: Cypriots faced a currency lockdown to prevent flight of capital. The status of Cyprus as a financial hub was erased overnight as the writing on the wall became clear: Europe had just become more volatile.

“The one thing that went wrong for Cyprus were its bankers, who expected that Eurozone politicians could be trusted to pay back their loans. Investing heavily in Greek paper is not unusual for a country so intimately related to Greece and not much different from what other banks do with their own national (in this case quasi-national) sovereign debt,” said co-CEO and co-founder of Saxo Bank, Lars Seier Christensen.

What’s worse is that – more or less – Cyprus had everything going for it. A strong financial services sector, despite industry or agriculture to live from, an educated English-speaking workforce and the reputation of a safe haven.

This unpleasant curve ball has implications for the Middle East, particularly the UAE. Fortunately these are all good things. Cyprus was widely considered a haven for affluent foreign investors particularly Russians and Arabs. Since the depositors demographic are very similar in the UAE, and the banking system fairly resilient, it is almost intuitive that these investors – looking for a new place to park their funds – will look towards the UAE, thus boosting capital inflows into the country.

In the meantime the ECB has said that it will continue to provide liquidity to Cyprus banks, after claims by the Cypriot authorities that it might cut its support. In focus is also the Euro as it trades at three-month lows, and faces further downside pressure. Questions on whether Cyprus will even manage to hang in as a member of the single currency are being raised. This is despite ECB president Mario Draghi having improved confidence in the EUR with his ‘whatever it takes’ statement.

“Improving conditions in early 2011 and 2012 disintegrated as the Eurozone crisis intensified. And it could happen again. The impact of the unfolding situation in Cyprus is a risk factor that cannot be ignored,” Tony Tyler, the Iata director general, said.

As Europe steamrolls from one country bailout to another, the Euro crisis continues to find no light at the end of the tunnel.