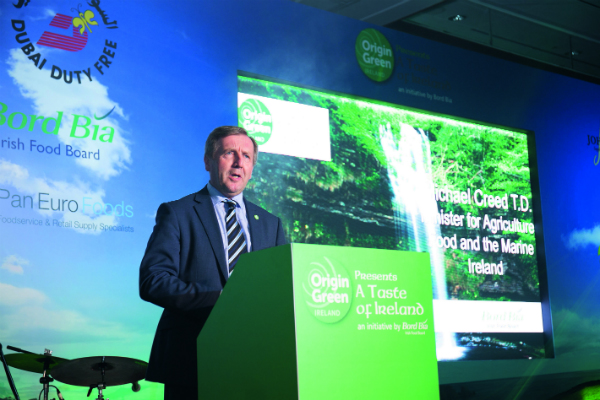 Ireland and the Gulf Cooperation Council countries could find mutual benefit in closer ties over food and agriculture, according to the Irish government’s minister of agriculture, food and the marine.

Minister Michael Creed was in the region in March leading a trade mission to the Gulf states in a bid to enhance existing relationships and promote the Irish agri-food sector.

Speaking to Gulf Business on the sidelines of an event to promote sustainable Irish beef, he said that opportunities abound given the food needs of the GCC.

“Our relationship is excellent – we’ve had some very productive meetings here with UAE authorities and with Saudi authorities,” he said.

“We think we’re a very good fit here because we export 90 per cent of what we produce, and this region imports probably 90 per cent of the food it requires. So we see opportunities.

“Our present foothold is about EUR250m ($269.5m) in terms of exports to the region and we see – in terms of our ambition to grow – this area as offering significant footage.”

And the minister identified Dubai in particular as being of interest.

He said: “Dubai in many respects is the target market – sophisticated, increasingly Westernised in dietary habit, more spending power, but also interested in the Origin Green sustainability badge that’s very important to our offering now. So we see this area as an ideal fit.”

Creed believes the GCC countries can look to Origin Green for inspiration and guidance when formulating their own sustainability plans.

“We’ve found across the region here that climate change and resource management is a really big issue,” he said.

“We all have an obligation now under the Paris Accord to manage our resources, our water waste, reduce our carbon footprint, and so on. Long before now – back in 2010-2011 – our farmers were beginning to look at issues around their sustainability practices, reducing their carbon footprint. So we’re a bit ahead of the curve.

“We have established within the remit of my department an agency, which is called Sustainable Food Systems Ireland. The CEO is on our delegation with us and has engaged with both Saudi and UAE authorities on that knowledge that we have accumulated on this journey we’ve been on in terms of our sustainability – our sustainability models, our livestock management, our food systems.

“We are looking to partner with countries and business opportunities here in the GCC area to enable those technologies that we have developed to be exploited with other countries, and I think that’s a very significant development.”

The Irish trade mission to the GCC comes at a time of uncertainty for the European country’s future dealings with its biggest trade partner, the United Kingdom.

In light of the Brexit vote, which is likely to mean that the UK will break away from the European Union by the summer of 2019, Creed admits there is a need to build on existing partnerships and relationships.

“Obviously the UK is out of favour with the European Union, and it has signalled its intent to leave. And that’s a very significant challenge to us,” he said.

“We have approximately 40 per cent of our exports in the agri-food side go to the UK. So whereas trade missions were always an important thing for our industry and what we do, they’ve taken on an added urgency now in the context of Brexit.

“We’re not walking away from the UK market, but we also think it’s prudent to seek to minimise our exposure there and seek new market opportunities.

“Opening markets is a critical part of the Brexit strategy.”