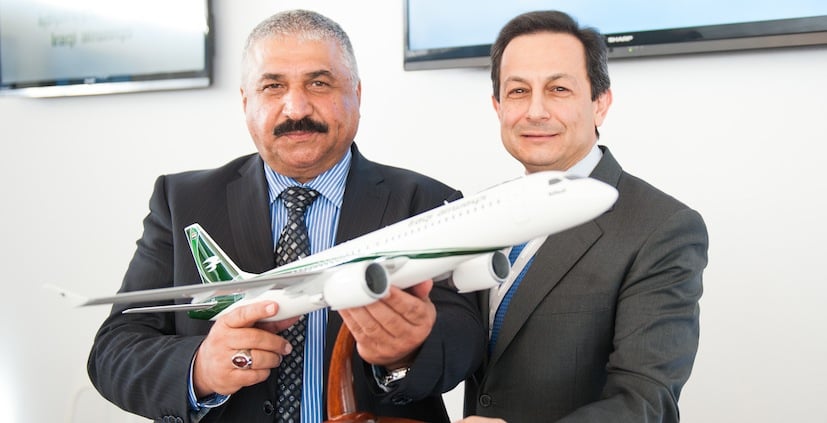 Iraqi Airways’ desire to re-emerge as a significant regional and international carrier took another major step today after it signed a letter of intent (LOI) for five CS300 jetliners from Bombardier, with options for 11 more, at The Dubai Airshow.

Based on current list prices, the deal would be worth $387 million, which would rise to $1.26bn if all options are converted.

Captain Saad Al-Khafaji, CEO and director general, Iraqi Airways, said it has successfully utilised the CRJ900 next generation aircraft and today marks the next phase, as the airline plots new fuel-efficient routes into MENA and European markets in the 100-to-149-seat sector.

The aircraft, due to be delivered from 2016, will contain 132 passengers with 12 business and 120 economy seats.

As befits the globally scattered nature of aviation, and its component industries, today’s top table saw Captain Saad joined by officials from Northern Ireland and Canada, with Bombardier Aerospace Belfast making the composite wings and Bombardier itself headquartered in Montreal.

The Hon. Ed Fast, Minister of International Trade, Government of Canada, said the LOI will add another dimension to Canada’s participation in Iraq’s reconstruction and help grow bilateral trade.

Bombardier also announced today that low-cost Thai carrier Nok Air has placed a firm order for two Q400 NextGen turboprops, worth $63 million, and it will be the launch customer for the newly enlarged 86-seat model, which can fit 14 more seats.