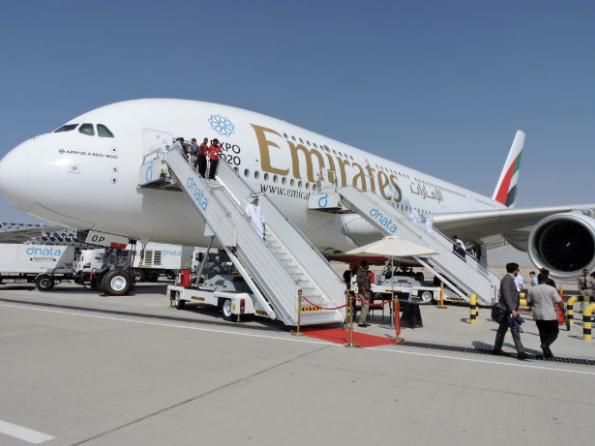 You do not have to look far to see the impact of sanctions on Iran’s aviation industry. On the edge of Tehran’s Imam Khomeini International Airport, rows of decommissioned white aircraft stand idle, stripped of their liveries. Symbols of a country starved of international trade links.

Long before the Gulf carriers established their dominance, Tehran was the centre for the region’s aviation industry. That changed after 1979 when sanctions took hold and sourcing spare parts became problematic.

Now across the globe, aviation executives are getting excited about Iran’s economic revival. But how the economic world order has changed in 36 years, not least due south where it is safe to say Gulf carriers have completely redrawn the global aviation map.

Boeing and Airbus stand to be the immediate beneficiaries of new orders. Although it is always worth remembering that even if Iran bought hundreds of jets today, deliveries would take years to arrive.

“Iranian carriers will likely look at opting for second hand aeroplanes as they come off lease or are stood down by others,” says Strategic Aero Research chief analyst Saj Ahmad.

The enthusiasm is understandable but needs to be tempered in this interim period. Airbus said it only supports Iranian operators on passenger aircraft safety matters in strict compliance with the Geneva Accord for flight safety operations.

Even if account sales are allowed to resume, Iranian carriers would still need to comply with separate regulation and restrictions that apply to financial instruments, she adds. “Until such time no one is cleared to receive monies from or lend monies to Iran, in any currency.”

The view from the seventh floor window of the newly opened ibis and Novotel complex next to the airport sums up the limitations and opportunities facing Iran.

During my 48-hour stay to mark Accor’s arrival – the first international hotelier to return since the 1979 Islamic Revolution – I saw a handful of Iranian carriers (Iran Air, Mahan Air, Iran Aseman Airlines and Qeshm Air). There was a Qatar Airways A320 shortly after I arrived on an Emirates B777 – one of four daily flights from Dubai. But that was about it.

It is a beguiling sight for a capital city airport and all the more extraordinary when you think 45 minutes away on the horizon lies ebullient Tehran. Where clogged streets are straining under its eight-million plus population.

A short two-hour flight away, the United Arab Emirates has wasted no time positioning itself as a gateway to Iran. Emirates, which started services to Iran in 1990 with two flights a week to Tehran, now operates four daily flights to the capital city. Etihad also flies here, increasing its three-a-week flights to daily in April on two-class A320s, and flydubai has quickly raised its network to seven points; Tehran, Mashhad, Ahwaz, Hamadan, Esfahan, Shiraz and Tabriz. Air Arabia also serves Tehran, Mashhad, Shiraz and Lar daily and Isfahan three-times weekly from Sharjah.

Emirates’ commercial operations centre for the Gulf, Middle East, Iran and West Asia divisional senior vice president Sheikh Majid Al Mualla said the airline is currently satisfied with the four flights but expects more demand in the future. “It will open up a lot of business opportunities,” he says.

Upgrading the Boeing wide- bodies that serve the route to an A380 is a possibility and last September the Dubai carrier flew a ‘one-off ’ A380 to mark the launch of its fourth daily flight.

The carrier also recently started five-times weekly flights to Mashhad on a combination of two and three-class A330-200s. The launch was only announced a month before, which probably says as much about Emirates’ lean decision making as it does about Iran’s economic opportunities.

Etihad and Qatar have room for growth and will most likely be upping their schedules, if only so they do not lose out to both Dubai carriers. When flydubai starts receiving its B737Max deliveries from next year, the air- line could look to open up even more city pairs.

Should international carriers return en masse, work on airport infrastructure would need to be fast-tracked. IKIA only has capacity for six million passengers a year. A new terminal, due to be built in five years, will increase that to 20 million. Across the country, infra- structure will need to be upgraded and $6bn is being pumped into new airports in Araz Qom and IKIA province.

Dubai will host the first Iran Airports & Aviation Development show next March, symptomatic of its desire to serve as a global gateway to the country. According to initial materials, delegates will hear discussions on proposals to “rehabilitate” 27 airports and wide-ranging build-operate-transfer deals, public private partnerships and investment opportunities.

Clearly Iran’s aviation industry is poised for take off.