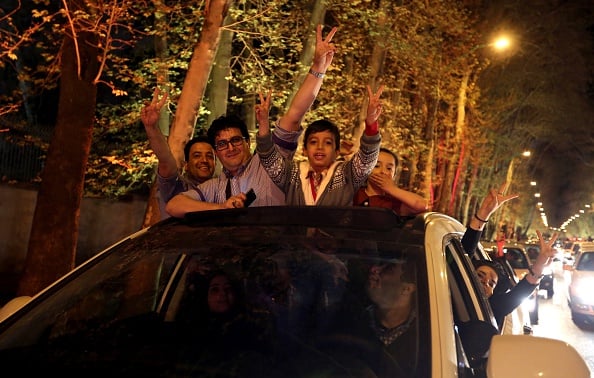 Failure to finalise a framework agreement between Iran and the six major powers aimed at curbing the country’s sensitive nuclear work could profoundly destabilise the Islamic Republic, analysts and politicians say.

Iranians’ hopes of ending their international isolation have risen so high since the accord that failure to finalise it would generate levels of dismay that could hurt the authorities, even if the West was portrayed as the guilty party, analysts say.

“Finally it is over. The isolation is over. The economic hardship is over. (President Hassan) Rouhani kept his promises,” said university student Mina Derakhshande, who was among a cheering crowd on Friday.

“Failure of the talks will be end of the world for us Iranians. I cannot tolerate it.”

Managing popular expectations will be more difficult in Iran now, said Karim Sadjadpour, an Iran expert at the Carnegie Endowment for International Peace in Washington.

“If the deal doesn’t come to fruition, most Americans won’t notice, while most Iranians will be devastated,” Sadjadpour said.

The tentative deal on curbing Iran’s nuclear work, reached last week in Lausanne, revived hopes of an end to sanctions in return for limits on its atomic programme, opening the way for economic reform and international recognition.

While the man who ultimately matters, Supreme Leader Ayatollah Ali Khamenei, has remained silent over the agreement, some hardline conservatives have taken off the gloves.

The deal has heightened their anger over pragmatist Rouhani’s 2013 election as president on a pledge to improve foreign relations and revive the economy.

But politicians and analysts say Khamenei approved “any step taken” by the Iranian nuclear negotiators, and the tension will abate if Khamenei supports the deal.

“Without the leader’s approval, the Iranian team could not agree to the framework deal in Lausanne. There is no rift among top decision-makers over the framework agreement,” said a senior Iranian official, who asked for anonymity.

The establishment groups behind Rouhani’s election win — the Revolutionary Guards (IRGC), powerful clerics and influential politicians — have united in public to support the nuclear deal, which was praised by the president as a “historic opportunity” that would benefit everyone.

The critics, wary of any detente with the West they fear would imperil the Islamic Revolution, hold influential positions in parliament, the security forces and intelligence services.

“Iran has exchanged its saddled horse for one with a broken bridle,” Fars quoted Hossein Shariatmadari, editor of the hardline Kayhan daily and an adviser to Khamenei, as saying.

With this in mind, some analysts believe that Khamenei will show flexibility when he repeats his faith in the negotiating team led by Foreign Minister Mohammad Javad Zarif, who was given a hero’s welcome on his return to Tehran after eight days of talks with the powers in Lausanne.

“Khamenei will continue to support the Iranian team, while denouncing America in his first public appearance,” said Tehran- based analyst Saeed Leylaz, a reference to Khamenei’s public speeches aimed at reassuring hardliners.

Since relations with Washington collapsed after Iran’s 1979 Islamic revolution, enmity towards the United States has always been a rallying point for Iranian hardliners.

But inflation, unemployment and lack of investment as a result of sanctions persuaded Khamenei to support Rouhani’s efforts to find common ground with the big powers on the nuclear question.

“Hostility towards America has been one of the pillars of Iran’s foreign policy since the revolution … But the leader still backs the nuclear negotiations,” said Leylaz. “It will be difficult for hardline conservatives to criticise the deal if Khamenei continues his support for the talks.”

Khamenei, whose hostility towards Washington holds together Iran’s faction-ridden leadership, remains suspicious of U.S. intentions and has ruled out normalisation of ties.

But some observers believe Rouhani will enjoy Khamenei’s support as long as the president’s growing prestige does not threaten Khamenei.

“Khamenei’s first priority is to preserve his own authority and the establishment,” said analyst Hamid Farahvashi. “Rouhani will be Khamenei’s scapegoat if the deal collapses.”

Even if the government succeeds in convincing hardliners to accept the preliminary deal, a bigger challenge may lie in motivating the nation if negotiators fail to reach a final accord in June, officials and analysts said.

“The establishment’s existence is at stake. I don’t even want to think about such failure. Not only Rouhani but the whole system might be endangered in that case,” said another official. “Now, people have very high expectations and hopes.”

But popular support for the deal could turn out to be a double-edged sword for Rouhani, said Ali Vaez, of the International Crisis Group.

“It is necessary for selling the agreement, but should widespread expectations of rapid change be dashed, the disillusionment of his constituency will be all the more difficult to contain,” Vaez said.

Many Iranians see a nuclear deal as Iran’s ticket out of economic isolation. Thousands danced in the streets, chanting “Rouhani, Zarif you are our Heroes”, when the framework agreement was reached.

But there are already signs that Iran and the powers have different views about what was agreed, particularly over the speed at which sanctions are lifted.

Iran, the United States, Germany, France, Britain, China and Russia resume talks in the coming days. The deadline for a final deal is June 30.