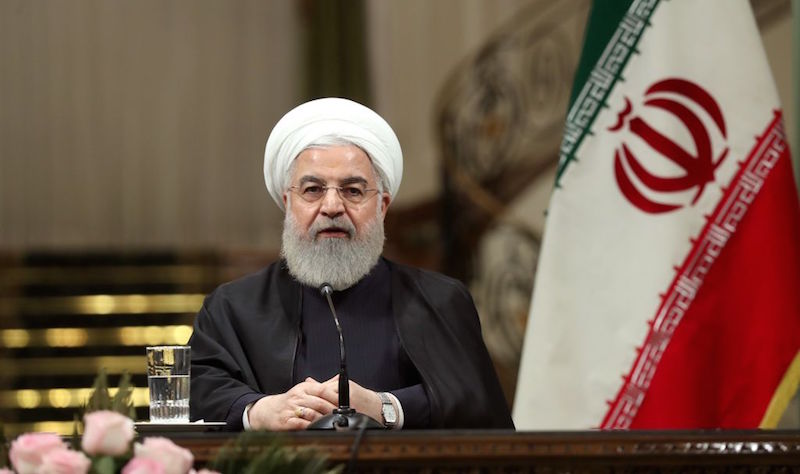 Iran announced on Wednesday it was relaxing some curbs to its nuclear programme, announcing steps that stop short of violating its 2015 deal with world powers for now, but threatening more action if countries do not shield it from U.S. sanctions.

Hours later, the United States said it was not finished imposing sanctions on Iran and planned more “very soon”. It warned Europe against doing business with Tehran via a system of non-dollar trade to circumvent U.S. sanctions.

A year to the day after Washington exited the nuclear deal, Iranian President Hassan Rouhani announced changes that experts said seemed tailored to ensure Tehran avoids triggering the deal’s mechanism to punish it for violations, at least for now.

“For now, nothing changes, but this could be a ticking time bomb,” a European diplomat told Reuters.

The main new measure that takes effect now would have limited practical impact: a halt to Iran’s sales of enriched uranium and heavy water to other countries.

The deal allows such sales so Iran can keep reducing its stockpiles below maximum thresholds, but Washington already effectively barred the sales with a sanctions move last week. For now, Iran’s stockpile of enriched uranium is still well below the deal’s cap and heavy water is less sensitive.

Rouhani also threatened that in 60 days Iran would resume enrichment of uranium beyond the low fissile purity – suitable for civilian nuclear power generation – allowed under the deal, unless the five other powers signed up to it found a way to protect Iran’s oil and banking industries from U.S. sanctions.

“If the five countries came to the negotiating table and we reached an agreement, and if they could protect our interests in the oil and banking sectors, we will go back to square one,” Rouhani said in a televised address.

“The Iranian people and the world should know that today is not the end of the JCPOA,” he said, using the acronym for the nuclear deal. “These are actions in line with the JCPOA.”

The 2015 accord was signed between Iran, Russia, China, Britain, France, Germany and the United States, before President Donald Trump took office. Iran agreed to limits on its disputed nuclear programme in return for the lifting of sanctions.

Washington’s European allies opposed Trump’s decision to pull out and have tried, so far in vain, to find ways to blunt the economic impact of new U.S. sanctions, which include an all-out effort to block Iran’s oil exports to throttle its economy.

France and Germany both said they wanted to keep the nuclear deal alive, and warned Iran not to violate it.

“Our position remains that we want to stick by the agreement, especially to prevent Iran from gaining possession of a nuclear weapon,” German Foreign Minister Heiko Maas said, stressing the pact was crucial for European security.

Russia and Iran both blamed the United States for what they portrayed as Tehran’s forced decision to suspend some pledges under the nuclear deal, while putting the onus on European powers to guarantee sanctions relief for Iran.

China said the deal should continue to be implemented and called on all sides to exercise restraint and pursue dialogue.

The Trump administration says the deal, negotiated by his predecessor Barack Obama, was flawed as it is not permanent, does not address Iran’s ballistic missile programme and does not punish it for waging proxy wars in other Middle East countries.

Tim Morrison, a special assistant to Trump and Senior Director for Weapons of Mass Destruction and Biodefense, told a conference that Washington was not “done” with imposing sanctions on Iran. “Expect more sanctions soon. Very soon.”

Morrison said the United States would move quickly against any attempt by European countries to fray the U.S. sanctions noose around Iran. He advised them not to use a so-called Special Purpose Vehicle to enable non-dollar trade with Iran.

“If you are a bank, an investor, an insurer or other business in Europe you should know that getting involved in the … Special Purpose Vehicle is a very poor business decision,” Morrison said.

Nuclear arms control experts said Iran’s steps announced on Wednesday appeared calibrated to avoid setting in motion renewed sanctions under a “snapback” mechanism in the 2015 accord.

Mark Fitzpatrick, an associate fellow of the International Institute for Strategic Studies, said Iran was not yet close to exceeding its allowed stockpile limit of low-enriched uranium, and its heavy water stockpile was a comparatively minor issue.

“Enriching (uranium) to 20 percent would surely spark sanctions, so I expect in 60 days there will be various ‘technical’ reasons why it can’t be done right away,” he said of Rouhani’s threat to exceed the enrichment purity limit to levels farther along the road toward high-enriched, bomb-grade uranium.

The weeks leading up to the anniversary of Trump’s withdrawal from the agreement have seen a sharp tightening of U.S. sanctions and an increase in tensions on other fronts.

From this month, Washington has effectively ordered countries worldwide to stop buying Iranian oil or face sanctions of their own. The Trump administration has revoked waivers that had allowed some countries to continue buying Iranian oil and it aims to reduce Iranian crude exports to zero.

Washington has also blacklisted Iran’s Revolutionary Guards as a terrorist group. Iran responded with threats to close the Gulf’s Strait of Hormuz – the conduit for about a third op the world’s seaborne oil exports – if its ships were blocked there.

Washington announced the deployment of an aircraft carrier and B-52 bombers to the Middle East to counter what it says are “clear indications” of Iranian threats to U.S. forces there.

Tehran said the USS Abraham Lincoln was merely replacing another carrier under a scheduled rotation, and called the U.S. announcement old news. The U.S. military confirmed the deployment was already scheduled but said the carrier’s movement was being “expedited” due to heightened tensions with Iran.

The looming total ban on oil sales is likely to sharply increase the economic hardship for Iran’s 80 million people. Finding a response is the biggest test yet for Rouhani, a pragmatist who has faced strong opposition from hardliners.

The nuclear deal was his flagship policy to end Iran’s isolation and open up its economy to the world. Ultimate authority in Iran lies with Supreme Leader Ali Khamenei, a cleric in power since 1989, who signed off on the nuclear deal but remains close to the hardline faction challenging Rouhani.

Washington’s European allies say Trump’s repudiation of the deal weakens the pragmatic wing of Iran’s leadership and plays into the hands of hardliners. It means ordinary Iranians see no economic benefits from Rouhani’s efforts to open the country.

Trump’s hard line is backed by Israel and Washington’s Gulf Arab allies, such as Saudi Arabia and the United Arab Emirates, which see Iran as a foe and which gain leverage over global oil prices by keeping Iranian crude off the market.