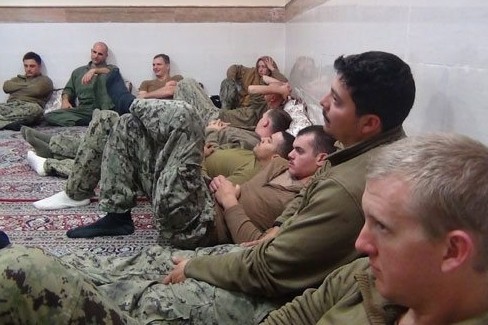 “Our technical investigations showed the two US Navy boats entered Iranian territorial waters inadvertently,” the IRGC said. “They were released in international waters after they apologised.”

The sailors had been held aboard two US Navy patrol boats in the Arabian Gulf on Tuesday.

The US has thanked Iran for the swift release of the sailors.

Secretary of State John Kerry said the quick resolution was indicative of the importance of diplomacy.

“These are always situations which have an ability if not properly guided to get out of control…This kind of issue was able to be peacefully resolved and officially resolved, and that is testament to the critical role diplomacy plays in keeping our country safe, secure, and strong,” he said.

The Pentagon said there were no signs of the sailors being harmed while in Iranian custody.

Officials also confirmed “the Navy will investigate the circumstances that led to the sailors’ presence in Iran”.

The incident caused alarm since it came days before the expected implementation of the nuclear deal between Iran and the six world powers.

The landmark deal, signed in July last year, calls for Iran to limit its nuclear activities in return for the lifting of crippling international sanctions.

The deal will only come into effect after the International Atomic Energy Agency certifies that Iran has fulfilled its commitments under the deal.