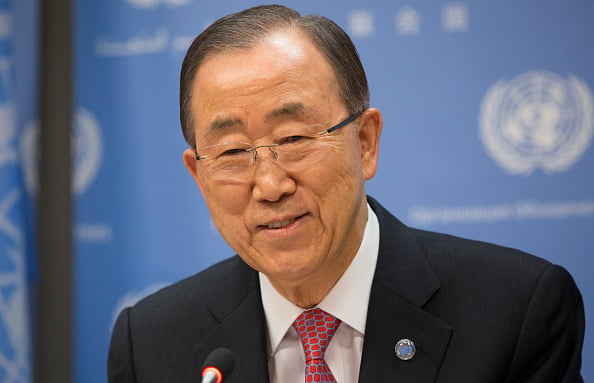 Iran’s ballistic missile launches “are not consistent with the constructive spirit” of a nuclear deal between Tehran and world powers, but it is up to the United Nations Security Council to decide if they violated a resolution, U.N. chief Ban Ki-moon said in a confidential report seen by Reuters.

Ban’s reluctance to state whether the March missile launches flouted the council resolution, which was adopted a year ago as part of the deal to curb Iran’s nuclear work, further weakens the case for new sanctions that hinged on the interpretation of ambiguous language in the resolution.

Most U.N. sanctions on Iran were lifted in January when the U.N. nuclear watchdog confirmed that Tehran fulfilled commitments under its nuclear deal with Britain, France, Germany, China, Russia and the United States. But Iran is still subject to a U.N. arms embargo and other restrictions.

Under the U.N. resolution, Iran is “called upon” to refrain from work on ballistic missiles designed to deliver nuclear weapons for up to eight years. Critics of the deal have said the language does not make it obligatory.

“I call upon Iran to refrain from conducting such ballistic missile launches since they have the potential to increase tensions in the region,” Ban wrote in his first bi-annual report to the 15-member Security Council on the implementation of remaining sanctions and restrictions.

“While it is for the Security Council to interpret its own resolutions, I am concerned that those ballistic missile launches are not consistent with the constructive spirit demonstrated by the signing of the (Iran nuclear deal),” he said. The council is due to discuss Ban’s report on July 18.

The United States, Britain, France and Germany wrote to Ban in March about the missile tests, which they said were “inconsistent with” and “in defiance of” the council resolution.

The letter said the missiles used in the launches were “inherently capable of delivering nuclear weapons” and also asked that the Security Council discuss “appropriate responses” to Tehran’s failure to comply with its obligations.

Ban also said he was concerned by the seizure of weapons by the United States in the Gulf of Oman in March.

“The United States concluded that the arms had originated in Iran and were likely bound for Yemen. Iran has informed the (U.N.) Secretariat that it never engaged in such delivery,” he said.

Ban said in the report the United Nations was still reviewing information provided by the United States and Iran and would provide an update on the arms seizure to the Security Council in due course.