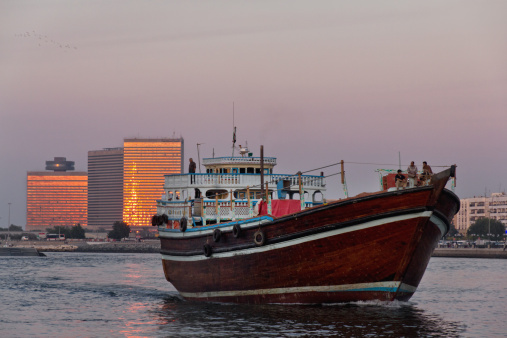 The sheer complexity of the interim Iranian nuclear deal and the expected slow pace of implementation tempered optimism among traders in the Gulf emirate of Dubai on Monday over the impact of up to $7 billion in sanctions relief.

But the expected concessions have been enough to give a psychological boost to the Iranian business community in Dubai, the main gateway into the economically isolated country.

Despite a decade of sanctions, Iran has managed to get most of the commodities and goods it needs via Dubai’s flourishing re-export market. But new embargoes imposed by the United States and its allies in late 2011 and early 2012 hit hard.

At Dubai Creek on Monday, Iranian labourers loaded washing machines, televisions, mattresses and other goods onto small wooden and steel ships destined for Iran, about 160 km (100 miles) away.

The dozens of ships that line the docks here make the roughly 12-hour journey across the Strait of Hormuz a few times each month.

An Iranian trader named Reza, who has been exporting cosmetics products to Iran by boat for nearly ten years, told Reuters the deal constitutes “a positive step” but said he did not expect it to generate benefits overnight.

“We’re hoping that the tension between Iran and the West will be reduced, and that will result in a smoother business relationship because business has dropped dramatically in the last two years,” he said.

The vast majority of trade between Iran and its Gulf Arab neighbours is routed through Dubai, home to tens of thousands of ethnic Iranians and one of seven emirates making up the United Arab Emirates (UAE).

Two-way trade, excluding oil, between Iran and Dubai fell to Dhs10.8 billion ($2.9 billion) in January-June from 12.3 billion dirhams in the same period of 2012.

Sanctions imposed by Western nations have damaged Iran’s economy in the past two years by freezing its access to credit markets and preventing it from exporting oil, which was its principal source of foreign reserves.

A tentative deal reached over the weekend offers the country potential access to $1.5 billion in trade in gold and precious metals and the suspension of some sanctions on its auto sector and petrochemical exports in exchange for curbing its nuclear program. It will also give Iran access to some $4.2 billion in sales from its reduced oil exports.

Many Iranian traders in the UAE are uncertain as yet how far they will benefit from any extra trade generated by the deal, but they hope it will have a ripple effect by easing access to credit markets, facilitating transportation and opening simpler ways to send and receive payments.

A businessman who works for an Iranian food company based in Dubai told Reuters he is waiting to see how far the deal will go.

“The main issue we face is about payment,” he said. “At the moment we have to use money traders and that is not ideal. So if that is sorted out, this deal will be very handy for us.”

Such a development would help the emirate become the main staging post for an eventual return of foreign capital to Iran.

The hope is that some of these council members will now return.

The Iranian currency appreciated nearly four percent on Sunday following news of the deal, and it sustained that level on Monday, according to a local money changer.

Mehran Ershadifar, who runs a construction company in Dubai and a trading company in Iran, has lived in the UAE for two decades and says tighter restrictions the over past few years have made it increasingly difficult to conduct business.

The growth in trade created by the nuclear deal is small for now, he said, but “the dam is broken.”