The 2021 F1 season was definitely one for the history books. In one of the most fiercely contested battles in recent memory, Red Bull’s Max Verstappen overtook seven-time world champion Lewis Hamilton in the final lap of the year’s closing race in Abu Dhabi to secure his first world title. The world’s fastest sport delivered a season that fired on all cylinders.

Among the 10 teams participating were McLaren Mercedes. In F1, McLaren is the second oldest active team, as well as the second most successful Formula 1 team – behind Ferrari – having won 183 races, 12 drivers’ championships and eight constructors’ championships. Currently helming McLaren Racing and calling the shots at the outfit is CEO Zak Brown.

“It’s highly likely we’ll finish fourth [in the Constructors’ Championship],” Brown correctly predicted to Gulf Business just ahead of the final race in Abu Dhabi last year. “That’s probably the only disappointing part to the season.” But the 2021 season as a whole has been far from disappointing for McLaren Racing; in fact it’s been one of its best in over a decade. At the Italian Grand Prix in Monza, McLaren scored its first victory in 10 years, with its two drivers – Daniel Ricciardo and Lando Norris – notching a one-two position on the podium, sweetening that victory even further. The team also had more poles in 2021 than it did in 2020, including a long-awaited one in Russia.

On the prospects of McLaren building on that momentum for 2022, Brown is refreshingly pragmatic, with none of the chest-thumping hubris that is characteristic of most racing bosses. “I think it’s great we won our first race this year [2021]. We need to be careful not to raise expectations to an unrealistic level.

“Of course, we’re going to give it everything we’ve got. But we still have a couple of years of technical catch-up that we just can’t accelerate any further or faster than we are. We still have technical infrastructure that we’re catching up on, most notably our windtunnel. I’m not going into next year [2022] thinking we’re going to be a championship contender.” 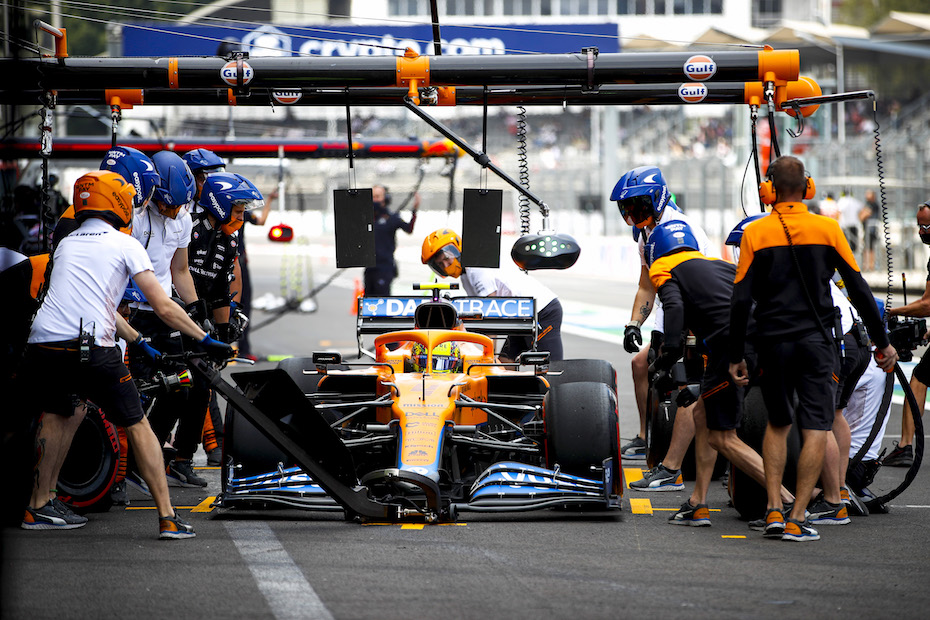 One of Brown’s chief roles is to ensure that McLaren Racing is not only technically sound, but financially robust as well. At the close of the 2020 season, McLaren finished third in the constructors’ championship, which meant significant amounts of money to further its racing ambitions. That same day as the final race in 2020, US sports investment group MSP Sports Capital invested GBP185m to acquire an initial 15 per cent stake in the outfit, that will increase to 33 per cent shareholding by the end of 2022. At the time the deal was struck, it valued McLaren Racing at GBP560m.

“Generally, the majority of other team bosses have more technical backgrounds – that’s where they spend their time. I spend mine on the commercial side. Clearly our racing portfolio references are very attractive to corporate partners. We have a sophisticated understanding of what partners want to get out of a relationship with McLaren, and we work hard to understand their business and really focus on growing their business [as well],” says Brown.

Its F1 partners include Richard Mille, Dell Technologies, British American Tobacco, Cisco Webex and Coca-Cola, among several others. McLaren hasn’t selected a title sponsor for its F1 team, and it’s a decision that Brown is happy to maintain. “We’re ahead of our business plan as far as where we want to be with our corporate partner portfolio to elegantly sell the car – you don’t want to turn [the car] into a patch of logos. Ultimately, we have a big partner on the side, and the rear wing. We’re not actively pursuing a title sponsor in our business plan and that is a conscious, deliberate decision that I made when we started.

“I’d rather not have all my eggs in one basket because our partners contribute a lot to our business growth and our brand. We’re not averse to having a title partner, but the way we’ve built our commercial proposition, we don’t need one.”

Formula 1 introduced a budget cap for teams of $145m for the 2021 season, and plans to drop that to $135m by 2023, giving newer teams a fighting chance to compete with the big names such as Ferrari, Mercedes and Red Bull whose previous annual budgets are believed to have exceeded $400m each. The new budget caps were drawn up alongside a fairer distribution of prize money and increasing the share of F1 revenue that smaller teams are entitled to. In October last year, Mercedes boss Toto Wolff added that the 10 teams currently on the grid were on the verge of all becoming profitable.

“I think the health of the teams has never been stronger. In Formula 1, there have always been two or three teams in trouble at any one time. Now, you have 10 very well-funded teams by very credible individuals or investment groups,” says Brown. “You know, Sauber was saved by Finn Rausing a few years ago [when] it was headed in the direction of administration. And here it is a couple of years later turning around $400m for the racing team.”

An ‘anti-dilution fund’ was reportedly introduced by way of the confidential Concorde agreement struck between F1 owners Liberty Media, the teams and the FIA that made any new team wanting to enter F1 pay a $200m fee, which will be shared by the existing teams. This will offer a sense of security to those teams currently on the starting grid. “I’m now getting calls on a routine basis from very significant sports investors who are really keen on buying Formula 1 teams, and there’s no team to buy. So it’s become a seller’s market, and no one wants to sell,” adds Brown.

The Middle East is a market that is very much on the radar of F1. The first-ever races in Saudi Arabia and Qatar were held in 2021. Those races will continue to be held alongside the ones in Bahrain and the UAE (the latter recently signed an extension to continue hosting the race until at least 2030).

Showing deeper commitments to the region, in 2018, McLaren signed a five-year R&D agreement focused on extreme performance technology with the King Abdullah University of Science and Technology (KAUST) in Jeddah. The partnership aimed to jointly research areas of computational fluid dynamics, fuels and lubricants, machine learning, advanced mathematics as well as sensors and electronics. “KAUST is a great partnership. We like working with students. KAUST is a first-rate campus. We are working together around STEM to develop various technologies. We have a history of working with students and universities. Our F-duct was co-developed out of a university. You get fresh thinking out of students. We enjoy partnerships like that and they make a real contribution to, at the end of the day, making us go faster,” says Brown.

In another sign of its collaboration with entities within the region, on the eve of the Abu Dhabi race last month, McLaren Racing, as part of the ‘Driven by Change’ initiative, unveiled a one-off livery on the car. The creative reins for that livery were handed to UAE-based artist Rabab Tantawy. The initiative will see McLaren’s partner, British American Tobacco, provide further opportunities for underrepresented creatives throughout 2022 to showcase their work across its various platforms. 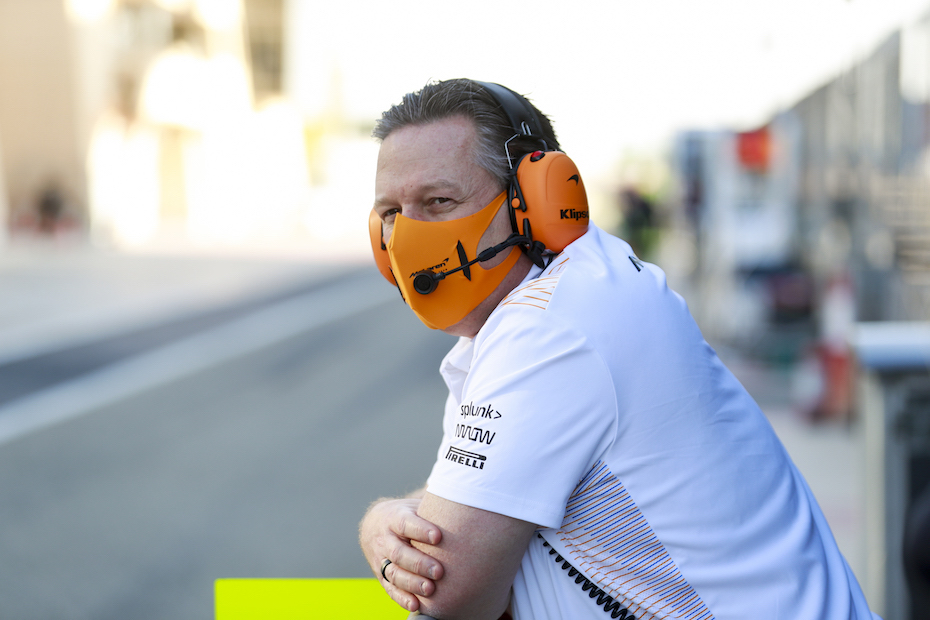 Outrageous driver shenanigans, acidic inter-team rivalries, and sometimes controversial team owner decisions mean that F1 is as much a sport as it is a source of entertainment. That aspect of it was seized on by Netflix, whose Drive to Survive series, now in its third season, offers an all-access pass into the behind-the-scenes trappings of F1. It has opened up the sport to a wider audience, much larger than its traditional fan base. “I think Netflix has done absolute wonders for our sport. I can’t recall another media platform that’s had the impact that Netflix has had. Formula 1 has such an interesting storyline to it on and off the track.”

What is sure to have a seismic impact on teams, drivers and managers, both on and off the track, is the mega F1 rule changes that will come into effect this year – believed to be the biggest changes in four decades. With fully shaped underfloor tunnels, cars will use ground effects to generate downforce in a system last seen in 1982. Also in 2022, the cars will shift from 13-inch to 18-inch tyres, while the newly-introduced aerodynamic regulations aim to reduce “dirty air” that results in cars losing downforce when chasing a car directly in front of them. “It’s the single largest rule change in modern times. Developing a new race car from the ground up where you’re not pulling over anything really from the previous year is a unique situation. It’s an exciting challenge for the design team and the engineers. I think the challenge is that they don’t really have a baseline to work from like you historically would,” notes Brown.

Apart from F1, McLaren Racing already participates in IndyCar as well as esports. Starting 2022, it will also take part in the FIA-sanctioned electric off-road racing series Extreme E. And there might be more announcements to come this year. Brown says, “We’ve been reviewing the World Endurance Championship series which we like and we’ve also been reviewing Formula E. Those continue to be under review and I think we’ll make some decisions on those in the next few months.”

But for McLaren, as is the case with every other auto major, Formula 1 remains at the very pinnacle. “Our world revolves around Formula 1. I think Formula 1 is on fire at the moment. I see that continuing and only getting stronger as the competition gets closer,” says Brown. Making sure that its competition stays a car length behind it, while McLaren itself closes the gap on those immediately in front of it, is a well-crafted strategy that Brown has likely already meticulously mapped out.

Cisco signs as an official technology partner of McLaren Racing