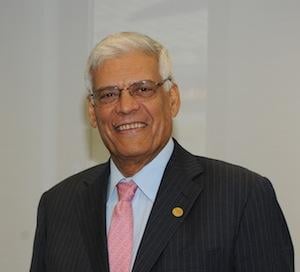 OPEC’s Secretary General knows a crisis when he sees one. And, despite a recent downward revision of global oil demand, Abdalla Salem el-Badri is not a man to panic. “What I’m seeing is not a crisis in the oil market, it’s a slight slowdown.”

“You cannot reduce unemployment by hedging and speculating on commodities.” He urges that something must be done to increase employment in North America. “I hope these negative signs will not continue through the remainder of the year and throughout 2012. We hope solutions can be found.”

The health of the global economy is always uppermost on the minds of OPEC members. Oil producers require healthy demand from the world market and any slowdown will have a direct impact. The September OPEC Monthly Oil Market Report estimates the world economy will grow by 3.6 per cent in 2011 and 3.9 per cent next year. The downward revision on the figures is only a small percentage, but the slowdown in industrial activity in the developed world is evident and remains a major concern in the short-term.

El-Badri watches the industry and the markets on a daily basis and he concedes, “there is a slowdown in economic growth and a decrease in oil demand and this will affect the balance of supply and demand.”

Demand for oil from China and Asian countries have been key driving forces in the market in recent years. Chinese GDP growth remains robust at nine per cent, despite Chinese government intervention to curb inflation. As El-Badri oversees an aggressive investment plan by OPEC members, he seeks to know China more intimately. “The country will become the world’s biggest energy player and while there are good relations between individual OPEC countries and the Chinese, OPEC as an organisation is anxious to improve the dialogue with China.”

OPEC has succeeded in building strong relations with the EU and the IEA, despite its recent release of reserve stocks seen as unnecessary by some OPEC members and many in the market. There’s still a distance with China since their last meeting in 2007 and El-Badri says he needs “to talk to the Chinese and exchange data and information.”

As OPEC looks to increase production in the future, El-Badri says his members want to feel confident there will be demand for the additional oil. Without this assurance, “investment will be just shooting in the dark and new supply will never go to the market.”

OPEC also wants to see stronger ties with the BRICS; Brazil, Russia, India, China and South Africa. “It’s good for us both to help forecast our numbers and forecast exactly how much oil we should produce. If they are confident there are no negative signs then we will produce what they want, but we really don’t know now.”

Despite an uncertain future for the world economy and global oil demand, there remains considerable investment in the energy sector. OPEC members have sealed a robust investment plan, committing to a quarter of the world’s energy investment needs, according to OPEC’s World Oil Outlook 2010.

A healthy sum of $312 billion has been allocated for expansion of OPEC member oil projects in the coming years up to 2015. Price fluctuations will always be a concern, but El-Badri makes it clear that OPEC has no price target in place with OPEC decisions determined by “a reasonable price where we can invest and where it does not adversely effect world growth.”

Industry analysts and many ministers have hinted at a price around $85 a barrel to please all parties and recent aggressive social spending programmes in producing countries in the Middle East would tend to support this figure. El-Badri says that all member countries are still going ahead with planned investment in the oil industry, particularly in Iraq. “All the countries have contributed this amount to increase oil supply by 21 million additional barrels by 2015. We care about bringing additional supply to the market.”

Investment in Libya is currently at a standstill, but the Secretary General hopes this will restart in the near future. According to the IEA’s World Energy Outlook 2010, Middle East countries will collectively invest around $37 billion per annum from 2010 until 2035. Much of this investment will be in the upstream sector, such as the upcoming $20 billion Aramco/Dow Chemical petrochemical Sadara plant in Saudi Arabia.

The IEA has studied the countries in the Middle East that can add the incremental barrels and agrees the bulk will come from Iraq, but also from Saudi Arabia, Kuwait and the UAE. El-Badri says “member countries realise they are also consuming more, so they are all looking to find additional oil or gas to satisfy domestic demand as well.”