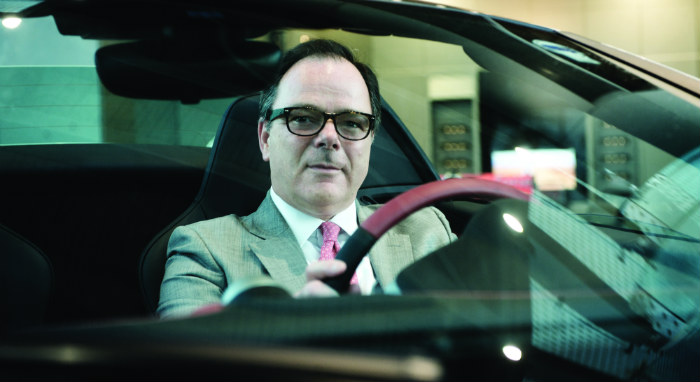 Ian Gorsuch maybe the regional head at a company whose F1 model set the record for the world’s fastest naturally- aspirated production car, but he is no speed demon when it comes to his driving. By his own admission, Gorsuch is very cautious behind the wheel.

He recalls recently testing McLaren’s latest model, the 650S at the Ascari circuit in Spain, and how the test driver sitting next to him kept urging for “more power” as his foot was coming off the accelerator at every approaching corner.

“The car is so good that even a bad driver like me can go around. But I’m afraid I am quite cautious,” he says.

Gorsuch’s visit to Dubai from the company’s regional office in Bahrain comes during an important year for McLaren, having announced its first operating and pre-tax profit ever.

The automaker has risen at an accelerated pace since launching in 2010, jostling customers from its marquee competition, which include the likes of Ferrari and Lamborghini.

“It has been an immense challenge for us because we’ve had to launch the company in the teeth of the worst recession for two generations up against the world’s biggest brands,” says Gorsuch.

By marketing to those who, as Gorsuch describes “didn’t just see the badge on the bonnet but wanted to understand the unique technologies underneath.” McLaren however, has managed to grow its base against the odds.

Last year, the carmaker sold 1,400 vehicles globally of which around 145 were in the Middle East, while 49 of the maker’s million dollar P1 supercars were sold in the region from a global total of 375.

Buyers in this region are also known to have a taste for the bespoke, pushing McLaren’s value per car higher here than any other part of the world.

“What makes this region more important than just the bear figures is that the key people in this region travel a lot and they are very cosmopolitan. They often have houses in London, Geneva and Beverly Hills. So if they buy a car here and they like it, they’ll often want it in their stable in the other locations,” says Gorsuch.

Buoyed on by its own strong performance, McLaren made the unusual step of announcing two new supercars this year, having promised one a year previously.

The 650S Spider and Coupe sit at much the same price point as Ferrari’s 458 Speciale, but offer more power, performance, and downforce, while also boasting a more luxurious interior, according to Gorsuch.

“So it’s not a stripped out road racer that our Italian friends create at that price point,” he says with a grin.

Gorsuch expects the Spider with its folding hard top to be the more popular of the two models. Following its unveiling at the Geneva Motor Show and an appearance at DIFC Motor Village, the model is 80 per cent sold out with full orders until the end of the year, he reveals.

However, the McLaren regional director will not be driving a 650S or any other McLaren supercar home himself any time soon.

“No one in the company has one except our chairman, and that is absolutely right, ” he says.

“Imagine you’re a customer waiting six or seven months for your car to arrive and you see a company functionary enjoying themselves smoking around the roads.”

Instead, Gorsuch’s regular road car is a BMW, while his favourite car to drive is the polar opposite of the cutting edge vehicles McLaren produces.

“My favourite car back in the garage in the UK is the complete antiphrasis of a McLaren, and that’s a Morgan. It’s ancient technology, like driving a 1930s to 1950s cars, but it’s great.”