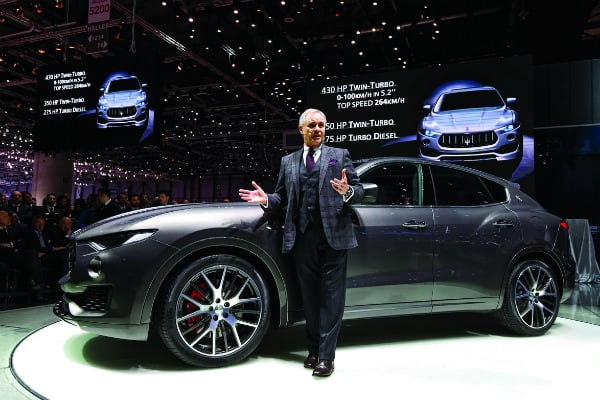 Opening a can of fresh air on stage he was making an obvious analogy to the notion that the Italian sports car manufacturer is bringing a ‘breath of fresh air’ to an otherwise stale SUV market.

If any motoring company has the right to pull off this particular cliché, Maserati is it. And following its own tradition of naming its cars after various trade winds such as the Khmain, Bora and Shamal, the new product’s title was announced as Maserati Levante – a wind that blows to the region from Italy.

After the on-stage reveal, Gulf Business sat with Wester in his office to talk about the significance of Levante and why a specialist company like Maserati is diving into the mainstream pool of family-sized, off-road vehicles.

It soon became clear that the can of fresh air could equally refer to his candour and confidence when discussing the move into new market territories.

“Range Rover needs V8s because they don’t have attractive V6s in their portfolio and their 5-litre V8 is for the museum,” Wester says, refering to his rival’s engines.

The Levante will not offer a V8 option, instead using the Ferrari-built, twin-turbocharged three-litre V6 that is also used in Maserati’s Ghibli and Quattroporte sedans.

“Europe is over 80 per cent diesel whereas markets like the United Kingdom are more than 95 per cent, and for the rest of the world, the V8 does not even account for 2 per cent despite some exotics,” continues Wester.

“Even in the Middle East, the predominant engine in the Quattroporte and Ghibli range is our V6 so it’s not a matter of having a V8, it’s about selling a V8 and they (our competitors) have them but they can’t sell them.”

If market conditions change, then the Levante could house a V8. But it is not on the radar at present.

Rather, the CEO reveals the firm is working on a group-wide project for a plug-in hybrid version that will be adopted across all Fiat Chrysler Automobiles brands.

“For Maserati, it would start with Levante but then it could work for GranTurismo and GranCabrio,” he says.

“You just need to choose the proper battery size for each car.”

The pressure is on for Maserati to dramatically raise its numbers game and evolve from an ultra-niche, Italian GT brand to a Porsche competitor across the model portfolio.

The ageing GranTurismo coupé and GranCabrio convertible are due for replacement while the Quattroporte saloon has been updated as a prelude to the mid-sized, volume chasing Ghibli sedan. The Levante SUV has now followed and most likely, the smaller Porsche 911-sized Alfieri coupé will appear in the mid-term.

After selling 8,000 units globally in 2013 and the advent of the new Quattroporte, Ghibli and Levante, Fiat Chrysler Automobiles CEO Sergio Marchionne gave the company the ambitious target of hitting 50,000 sales next year and 75,000 in 2018. Given the recent slump in Ghibli and Quattroporte numbers thanks to a downturn in demand from China, these heights seems a step too far for the foreseeable future at least.

The cash cow that is China has shifted quickly in recent times with demand moving away from large saloon type cars to SUVs, forcing a rethink among the world’s auto-makers. They still see it as their biggest market, but not where they had originally intended, creating a knock-on effect on every other region including the Middle East.

“Last year, the Quattroporte segment saw a 30 per cent down turn in China but it remains the biggest market locked in a battle with the US,” continues Wester.

“Today, China is the biggest market by far. It may have fluctuated in recent years but not in the SUV segment, which has seen constant growth.”

Given the huge volumes needed for China, the Middle East is still a relative drop in the proverbial ocean despite the fact that much of the testing is carried out here, making the Gulf more important in terms of research and development than sales.

“The Middle East is not important enough (for sales). It is important but it could be more important,” suggests the CEO.

“I’m absolutely happy with the market share but just as a market size in general. Obviously the United Arab Emirates is a big market within the region but there are issues of not being able to sell in some countries even though last year was a good year for Maserati in the Gulf.

“It is an important market. It’s rich in terms of mix but even considering it as a region, it is not huge volume for us and that’s simply a matter of fact.

“You have to be aware that it is not China, where they are buying 260,000 of these types of car a year. I would be happy to sell two orders of magnitude below that in the region but the Middle East is important because it has a very particular climate, a tough climate and so we always go and do a lot of testing.”

The Levante was tested on five continents from minus-38 degrees Celsius temperatures in the Arctic Circle to 50-plus degree temperatures in the UAE’s deserts. Based on the Ghibli, it uses the same Q4 torque vectoring AWD system but is predominantly an on-road performance-based car with the ability to venture off-road occasionally.

The company claims that in its top-spec, 430bhp guise, it can get from zero to 100kmh in 5.2 seconds and top out at 264kmh. All with perfect 50:50 weight distribution and the most aerodynamic profile in its class with the lowest centre of gravity.

Why is this important? Because customer demand in the luxury SUV segment has grown by more than 40 per cent in the last five years. Local pricing has not been announced but it will be available in the Middle East from the summer.

Deliveries into Europe begin in May from Dhs 280,000 ($76,000) with Asian markets following in July and North America in September.

“The guideline was always to not compromise and offer the best of two worlds.

“To know that you could go off road if you wanted or needed is of interest to many people. I was in Dubai a few months ago and we did some crazy driving in the desert as well as on the race track.“

No doubt the region’s residents will be doing the exact same thing very soon.