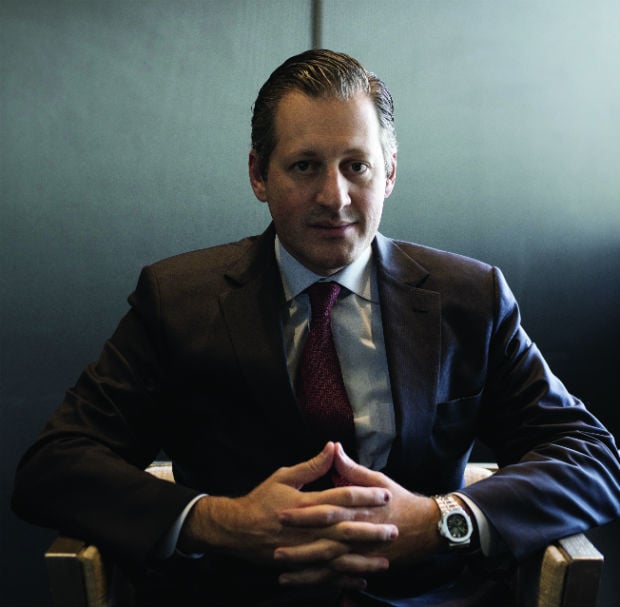 It’s around 10 am on an expectedly sunny Dubai morning as I’m escorted through to a dining table in the Armani Hotel’s darkly decorated conference rooms.

Greeting me with a handshake and a smile is a remarkably fresh-faced Boris Collardi, who shows little sign of fatigue despite having landed only two hours beforehand, even helping to clear the table as we prepare to talk business.

The CEO’s visit coincides with Julius Baer’s 10-year anniversary in the Middle East, after the Swiss private bank became one of the first companies to open an office in Dubai International Financial Centre back in 2004.

Much has changed for Julius Baer and the financial world since then, Collardi recalls, as we take our seats. But even though he climbed to the top of one of the world’s oldest private banks at the height of the financial crisis, the CEO sees positives in those changes.

“But frankly that’s the environment I love,” he adds.

“When you have a challenging environment, you can win on strategy and execution. If you have the right idea, deploy the right resources, and see the opportunity before someone else, you can really make a difference.”

Collardi, arguably, has done just that. Under his leadership, Julius Baer’s Assets Under Management (AuM) have increased 85 per cent to 285 billion Swiss francs as of end-October.

It was tragedy that led Collardi to take the helm at Julius Baer. In 2008, the unexpected death of 52-year-old Alex Widmer opened a void at the top of the bank, and further bad news was to follow as the financial crisis took hold.

When the Swiss-Italian took the reigns, global financial markets were at their lowest point. The youngest CEO in the bank’s then 119-year history, aged 35, he was the man expected to lead it through the darkness.

“You could argue it’s a blessing in disguise because you can only have an upside from there,” he says.

“But this upside comes at an enormous cost… you need to run a business in a very uncertain, volatile environment.”

Five years on, the CEO says his relative youth gave him a number of advantages during such a trying period in the bank’s history.

“When you’re younger, you have an unlimited amount of energy, and when you go through very stressful phases like these, energy is very important,” he remarks, while also suggesting, “new solutions to new problems were needed” given the unfamiliar financial territory.

“It’s better to be more open minded than have the impression – it’s been done this way for 25 years, why should we change now?”

One such new challenge off the back of the crisis has been regulation, with Julius Baer one of 14 Swiss banks being pursued by the US Justice Department, for its role in helping wealthy Americans evade taxes.

Collardi’s former company Credit Suisse has already paid $2.6 billion in penalties, with the investigation still on going and not expected to wind down until next year. But while suggesting there has been some overregulation, the CEO can see a positive slant on proceedings.

“Regulation has transformed our business and I will tell you it’s actually for the better at the end of the day, because through regulation the watermark to run a business is higher,” he says.

“We’re, remember, in an industry that is still growing…there are more millionaires every day, the pool is getting bigger. So if you have less people in a bigger pool, then you have bigger opportunities.”

An opportunity Julius Baer has been slower to react to is the growing role of technology in private banking.

In an interview with the Financial Times in October, Collardi admitted Baer had been a “late adopter” of technological advancements. A statement the CEO sticks to when pressed.

“Look that’s a fact…we’ve been a late adopter,” he says.

“However, now we’ve appointed a project director and we’re staffing the team to start our IT environment project next year.”

The project will not only touch Julius Baer’s banking systems, he reveals, but also some of its collateral systems, all the way to the bank’s e-banking internet solutions.

“We have a fairly ambitious programme of renewing our entire platform to the latest and to the best technology over the next three to four years.”

While he sees technology entering financial services from the beginning of the value chain with payments, Collardi is also eyeing the potential to go further.

“We’re starting to see small start-ups do asset allocation, asset aggregation reporting and financial planning, so I think technology will enter all the way to wealth management.”

Such advancements won’t happen overnight, but the CEO reveals that a section of Julius Baer’s IT programme will be looking at this “more disruptive tech”, with one of his staff recently visiting start-ups in Silicon Valley to see whether any ideas could be implemented into the firm’s IT systems.

Would Julius Baer look at acquiring start-ups if the idea was good enough?

“Any time… Any Time,” Collardi repeats.

Such a deal does not seem unlikely for a bank that has proven particularly acquisition hungry under Collardi’s leadership.

In June, Julius Baer announced the acquisition of the clients of Bank Leumi’s Swiss private bank and its private banking business in Luxembourg, with a combined 7.2 billion francs of AuM, in a deal worth up to 70 million francs.

Describing the landscape, the CEO suggests the economics of the private banking business are making acquisitions more likely.

“Due to the regulatory costs going up, market and risk appetite of clients has been subdued. Therefore the margins are lower. With lower margins, smaller businesses start to write losses, and that is part of the consolidation we’re seeing,” he says.

Most recently, the firm has been linked with Royal Bank of Scotland (RBS) unit Coutts International. The business, which RBS said it was considering selling in August, could be worth up to $1 billion according to reports.

When the subject of Coutts is raised, Collardi emphasises that he is not interested in going into an auction for the unit.

“If it was a private situation, one could discuss, but an auction not necessarily,” he reiterates. “It is certainly a good firm, but we’re not privy of the details.”

Would he be interested if the price was right?

“If the price is right, you always have to look at it,” he says. “But price is one consideration we would look at what is the business fit, what is the cultural fit and in order to assess that you need a little bit longer than five minutes haggling about price.”

For the moment the bank is also focussing on the integration of the Merrill Lynch IWM acquisition, which has increased Baer’s AuM by more than a third.

In its yearly earnings for 2013, the bank said it would hit the lower end of its target for the transfer of assets invested by former Merrill Lynch clients, while in H1 2014 a further 60 million francs of transaction, restructuring and integration costs were incurred.

However, Collardi insists judgement should be reserved until next year’s report.

“Next year in February, we’re going to give a transaction report. We are going to tell everybody where we are what we’ve delivered and I think it should be a good report, judging by the numbers we showed in the first half of this year.”

In Baer’s H1 2014 results, the unit contributed 56 billion Swiss francs to group AuM, while also helping lift it from fifteenth place to twelfth among the world’s private banks in terms of AuM, in a study published by Scorpio Partnership.

Collardi says the integration is now nearing completion with many of the planned 30 to 40 per cent cuts to the unit’s 2,200 staff, already made.

As part of the process, businesses and employees in Lebanon, Bahrain, Dubai, and Abu Dhabi, were transferred in December last year, he explains, with relatively few job cuts due to the size of the operations and lack of overlap, with the exception of Dubai.

“We’re really now at the tail end. The only big unit that still has to be moved over is India and that will be done at the beginning of next year. Otherwise we have already transferred 90 per cent of everything that we could transfer.”

Another rumour circulating in Switzerland in recent months has been a potential takeover of Julius Baer by behemoth Credit Suisse, although Collardi insists no “formal discussions took place”.

“I don’t have anything smart to say about it. They’re good guys and each one of us should pursue our own strategy. There is more than enough space in the market for all of us.”

This pure play private banking strategy is continuing to bear fruit, according to Collardi, and he insists the bank is growing faster than the market in terms of new clients “with or without M&A”.

“If you look at our valuation, we’re probably today the most expensive listed private bank in terms of price and AuM…so investors [do] like it.” Focussing on the Middle East, the CEO says Julius Baer is “committed to continue investing” in the region, with the bank’s market penetration now substantially increased following the Merrill Lynch integration and plans to enhance it’s local offering including sharia-compliant investment solutions.

He believes Baer’s Swiss pedigree is still an advantage in the region, despite a “formidable series of banks or group of banks that are being serious about private banking services.”

“We decided to kick off our efforts here ten years ago with very few people, now we’re over 100 people here in the region, and I think there is very strong potential,” he says.

But with Switzerland’s changing role in the financial world, the CEO also sees room for a new approach to attracting and maintaining clients, referencing Julius Baer’s Next Generation Summits, which focus on trends and areas of future investment for clients.

“The wine and dine, cocktail, caviar, that’s not where we want to be…that’s not what I would like Julius Baer to be associated with…that is the old world,” he says.

“Where we need to be is talking about investment, new technology, mega trends and what’s going to be changing the world.”