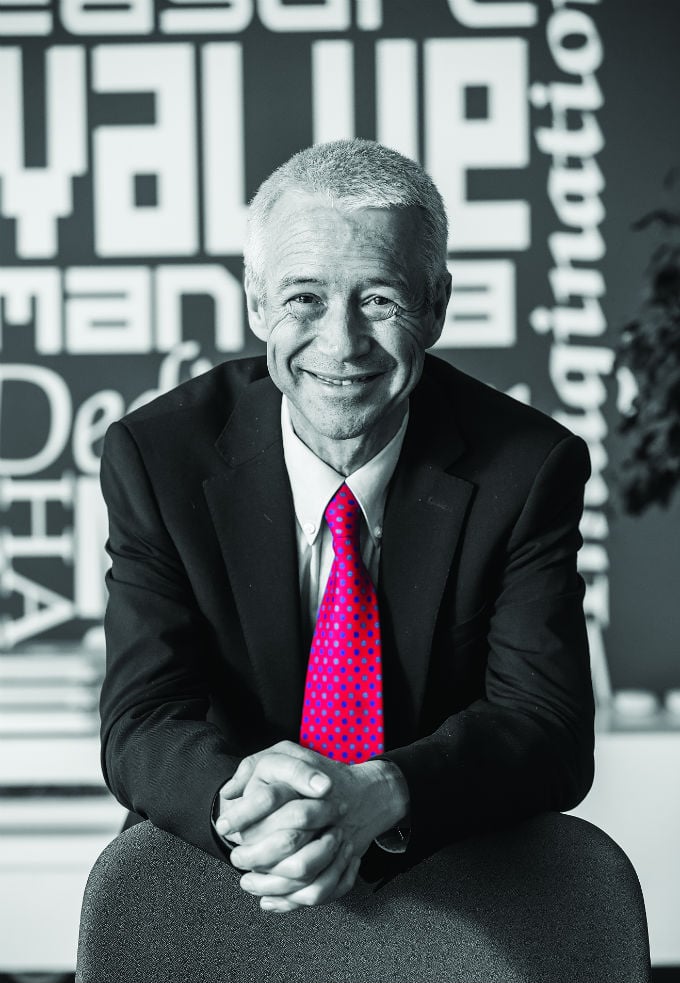 Over the course of his almost 30 years in the pharmaceutical industry, Joaquin Duato has witnessed some big and remarkable breakthroughs.

The first atypical antipsychotic that changed the treatment of schizophrenia, medications that turned HIV from a death sentence to a chronic disease and treatments that transformed the lives of patients with arthritis, inflammatory bowel disease and prostate cancer rank among his career highlights.

“I was discussing today that in the 20th century alone, life expectancy has increased about 35 years,” the Spanish-born American citizen recalls.

“Big contributors to these 35 years of additional life expectancy are medicines.

I feel proud of that, because I cannot think of any other human progress comparable to adding 35 years of life.”

But in such a Research & Development (R&D) focussed industry, the chairman of Fortune 500 giant Johnson & Johnson’s (J&J) $32 billion pharmaceutical business does not focus on the achievements of the past for long, particularly with other health threats still looming large.

In West Africa, the drug veteran has turned his attention to the world’s largest ever Ebola epidemic, while more locally in the GCC, he sees opportunities in surging diabetes rates and increasing government spending.

All that while he looks to maintain the unit’s position as the fastest growing top 10 pharmaceutical player in the US, Europe and Japan.

“We have problems today like Alzheimer’s, which is a plague in the ageing population. We are yet to find a cure for cancer and we still have a way to go in mental health,” he says. “So I still feel like there are patients waiting and there is so much more to do.”

Duato’s visit to Johnson & Johnson’s Dubai Healthcare City hub comes at a particularly promising time for those in the GCC healthcare sector.

More affordable treatment, lifestyle-related diseases and increasing insurance penetration are projected to increase the size of the GCC healthcare market to $69.4 billion by 2018, a CAGR of 12 per cent from the $39.4 billion seen in 2013, according to investment bank Alpen Capital.

Describing the region as having economic growth similar to an emerging market, with the stability and legal and regulatory framework of a developed one, the chairman says that J&J sees opportunities from the perspective of both business and healthcare.

“What we have in the Middle East are markets that are growing double digit,which is a very healthy percentage in an overall market that is growing in the 4 per cent range.”

Chief among these opportunities is the treatment of one of the GCC’s most pressing health concerns, diabetes, with rising obesity levels, a general decline in physical activity and growing reliance on processed food creating a new generation of sufferers.

“One of the root causes [of diabetes] is obesity, with prevalence in the Gulf very high for different reasons. So now we are collaborating with different authorities in the GCC to try to bring more education about diabetes, its prevention and its management.”

This approach includes a partnership with INSEAD’s Abu Dhabi campus to bring graduate candidates from the region to J&J’s R&D campus in Beerse, Belgium to help familiarise them with the different aspects of drug development.

“R&D in the area of pharmaceuticals is very complex, as complex or more complex than putting a man on the moon,” Duato remarks.

The chairman also recently returned from a visit to J&J’s Saudi Arabia office to meet with stakeholders and gain
an understanding of how to better partner with the government, as part of regional plans to tap into the increase in healthcare spending.

Part of this strategy includes a local R&D element, with clinical trials currently underway in the GCC for inflammatory bowel disease, diabetes, arthritis and hepatitis C, as well as plans to bring more drugs to the region.

Medicines in the pipeline for the region include diabetes treatment Invokana and others for arthritis, inflammatory bowel disease and a breakthrough chronic lymphocytic leukaemia drug, although there are no plans to setup local manufacturing, as J&J has done for its consumer business.

“Our goal here ultimately would be to transfer technology to local manufacturers so they can do it for us.”

Unsurprisingly one of the world’s more pressing healthcare concerns, the alarming spread of the Ebola virus in West Africa, has caught Duato’s attention.

The World Health Organisation (WHO) estimates a total of 22,444 cases of Ebola in Guinea, Liberia and Sierra Leone, as of February 4 2015, with 8,959 deaths. Cases in the US, UK, Nigeria, Mali, Senegal and Spain have also prompted global fears of an epidemic.

In October, Johnson & Johnson announced a commitment of up to $200 million to accelerate and significantly expand the production of an Ebola vaccine programme, combining the efforts of pharmaceutical unit Janssen’s preventative vaccine with that of Danish biotechnology firm Bavarian Nordic in a $187 million licensing deal.

The two-shot treatment, which combines J&J’s vaccine with Bavarian Nordic’s, proved safe and protective against the virus in testing on primates, normally a strong sign it will work on humans.

“It’s been very successful but we have to see if those results translate into humans. There is a positive correlation but there is not a certainty,” Duato warns.

Clinical trials were set to begin in January with around 600 volunteers in Europe and Africa. Up to 250,000 doses could be available in May if health authorities give the all clear for distribution.

Rival GlaxoSmithKline is aiming to have one million doses per month for its vaccine by the end of 2015, and Trefis, a company specialising in determining a companies’ stock value through products, estimates that J&J could target around 4.5 million vaccinations annually, priced at little over $30, should its trials be successful.

The firm estimates a $75 million annual profit target, considering J&J’s initial investment of $387 million for the Ebola vaccine, with its annual revenue target estimated at $145 million. Although, when asked, Duato insists profitability is not his main concern.

“I’m not looking at it from that perspective. When we made the decision to invest and embark on this project, we have not had profitability as part of the consideration, and I don’t know how it’s going to turn out frankly,” he says.

More broadly, Duato is looking to continue to drive J&J’s pharmaceutical business forward with a focus on innovation and R&D. The group allocated over $8 billion, or 11 per cent of sales to support R&D in 2013, with about 25 per cent of sales from products the company brought to the market in the last five years.

On the pharmaceutical side, many of these came from a strategy of co-developing and partnering with, or acquiring smaller biotech and pharmaceutical companies with promising development assets.

“We’ve been able to launch 14 new drugs in the last five years, and part of our success is the open innovation policy that we have, which is very focussed on companies that have innovative medicines in development.”

Alios Biopharma, a clinical stage biopharmaceutical company J&J completed the acquisition of in November for a total of $1.75 billion is one such example.

According to Duato, the company had no medicines in the market but several in development, including a treatment for
a paediatric infection with no effective therapy called respiratory syncytial virus (RSV). “We saw the opportunity to develop what would be the first treatment for that paediatric disease,” he says.

Financially, this R&D focus is continuing to bear fruit. In 2014, J&J’s total pharmaceutical sales worldwide were up 14.9 per cent year on year to $32.3 billion, with operational growth of 16.5 per cent.

“This has been a very good year for the pharmaceutical group of J&J, we are now the fastest growing pharmaceutical company in the top 10,” the chairman says proudly, a list that includes the likes of Novartis, Roche, Pfizer and Sanofi.

And referring back to conditions without effective therapy, including Alzheimer’s disease, and the Holy Grail, a cure for cancer, Duato believes the company has plenty to keep it occupied.

“I hope we can improve life expectancy in the 21st century in a similar way to the 20th century,” he says.

“I believe that in order to accomplish that you are going to need research- based companies like J&J that invest
in finding those cures.”