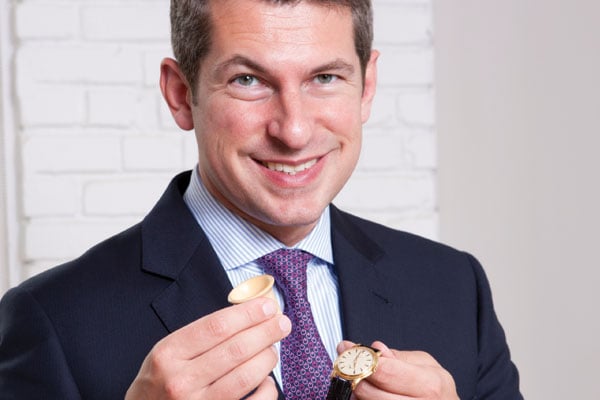 “I don’t chase the market. I buy what makes me happy. I don’t care what it’s worth tomorrow,” says John Reardon, the International Head of Watches at Christie’s when we meet on the eve of Christie’s Important Watches auction in Dubai in March.

That’s about as rock solid advice as you’d ever get from one of the watch auction world’s biggest stars.

“When it’s just about money, go to a bank. You’ll have more fun with your financial advisor than with us.”

Reardon rose through the ranks, with no special favours along the way. After starting out as a rookie at Sotheby’s in 1997, he moved to Patek Philippe in 2001 where he showed up on the first day on the job with a Longines on his wrist. “I went to the president and asked, ‘Shouldn’t I have a Patek Philippe?’ And he said, ‘Just like our clients, you’re going to have to save your money and buy one.’ ”

Reardon did just that and bought a quartz Patek Philippe Aquanaut Ref 5064. Why? Because it was the least expensive one in the lineup back then. But 22 years of being in the watch business now affords him hindsight that a rookie three years into his career couldn’t have dreamed of acquiring.

A decade later he had a brief stint as director of vintage and estate watches at Betteridge jewellery store in Greenwich, followed by a return to Sotheby’s in 2011 before finally landing the role to head up the Christie’s watch department in New York in 2013 where he has been ever since.

The business of auctions

“Including private sales, live auctions and online sales, we did officially in excess of $100m in 2018,” says Reardon.

And the watch doyen has a clear thought-process behind determining which watches are sold privately, which make it to live auctions and which are sold online. This process involves a mix of what the client wants, and the significance of the watch itself.

“If someone needs money quickly, a private sale is the best way to go. It has to be at a certain price point though. Our average private sales are approaching half-a-million dollars per watch.”

How much of Christie’s watch sales are done privately? Reardon teases the answer. “More and more of my time is dedicated to seven-figure watches and consigning and selling these holy grail pieces. But being a privately owned company, we don’t disclose how much we do with private sales.”

Private sales are also where Reardon and his team can sell watches when they suspect that the client is ‘flipping’ – buying a watch that is very rare and hard to get and then quickly selling it once again for a handsome profit.

“Recently, someone offered me a [Patek Philippe] 5711/1a Tiffany to be offered at auction. I knew that they bought it from Tiffany New York only two days before that with the intention to flip the watch and make an easy $60,000-$70,000 at auction, and I said no.

“The reason is that it is not only bad for the relationship with the brands and the retailers, but also not good for Christie’s to be fuelling the fire of speculation, keeping in mind that there is an individual at the retailer, in this case Tiffany, who entrusted that watch to a client to hold, to keep and to love and not for them to just sell it the next day.

“If the client brings me a watch that they bought four or five years ago and asks me to auction it – no problem. When I see that they bought it two days ago, it’s an issue for me. However, my private sale hat goes on and I’m happy to sell privately which is what I did in this case. It went to a collector and the watch will not show up publically. I didn’t sell to a speculator.”

The second channel of auction sales is the paddle-in-hand, high-adrenalin live auction. “Live auctions should be a fight, it should be a show. It should be something that people come to the exhibition excited about and it shouldn’t be a commodity-trading floor.

“If it’s a spectacular time machine that I’ve never seen before with a unique dial configuration, then it has to go to live auction,” adds Reardon.

The third channel is Christie’s online sales. “When it comes to online, it’s typically watches at lower price points. We aimed for an average price point of $10,000-$15,000 but now it just keeps going up because we found that the value of selling online is equal to that in a live sale.

“The factors [that determine if a watch makes it to an online sales channel] could be because some consignors love the idea that no one will touch their watch and it lives online and safely in a vault rather than at a live exhibition. Especially true if it’s your grandfather’s watch and it has quite a lot of sentimental connection.”

Reardon was an early adopter of e-commerce at the advice of tech mogul and now the world’s richest man, Amazon’s Jeff Bezos.

“It was 1999 and we had sothebys.amazon.com. The whole idea into which Amazon heavily invested was this revolutionary idea of selling watches online.

“Jeff Bezos himself came and spoke to the team and he sold me on the vision for the future in which everything including luxury will be online. That didn’t evolve as he hoped 20 years ago. But if you look at it today, it has evolved.

“Luxury and online is a complete fit and Bezos was 100 per cent correct. He was a visionary ahead of his time.”

The internet today, a very different beast from the one Reardon witnessed in 199, has a number of pre-owned watch platforms.

“I follow what the major players are doing – Chrono24, Watchbox in the US, and others. I have a lot of respect for what they’re doing. There’s a lot of venture capital and investment going into these businesses as they grow.”

But Reardon believes that there’s a stark difference in the approach of Christie’s compared to these pre-owned platforms. “Their focus is on pre-owned and on selling commodity watches for percentage points. What distinguishes us is our expertise and passion about watches, and vintage watches in particular, where collecting becomes an art form and not simply a game of percentage points.”

Brands like Patek Philippe, Rolex, Vacheron Constantin and Audemars Piguet are generally the rockstars of any auction.

These manufacturers understand the intrinsic value of ensuring that their vintage watches appreciate, or at least maintain their value, when they are offered at auction which is why a few of them offer services ranging from authenticity certificates to complimentary servicing of the timepieces that show up at auction.

But apart from the centuries-old watchmaking houses, there’s a new breed of independent watchmakers that Reardon is excited about. “In terms of creativity and design, nothing matches Max Büsser and MB&F – I just love his vision and what he and his team have done which is not only exciting, it’s revolutionary. The horological art is moving forward thanks to the independents.”

Though Reardon readily waves the flag for independent watchmakers, he often needs to temper client expectations when some of these brands are presented for auction. “We have tough conversations with some collectors where we tell them if you paid X for this, you may not see one-third of X when it comes back to market because that particular independent watchmaker might not be very well known. “However, if someone offers a Philippe Dufour, that’s another story. That’s a watchmaking deity that will bring an amazing amount.”

Reardon says the Middle East plays a significant role in Christie’s watch business. “Well over 20 per cent comes from within a couple of 100 miles radius from where we’re sitting here in Dubai,” he says, hours before the watch auction gets underway at Dubai’s DIFC.

Reardon heads up a department with 27 specialists spread across Geneva, Hong Kong, New York, Dubai, Bangkok and Tokyo. “Remy Julia has done such an extraordinary job building this horological journey that I think is still the beginning of the story,” he says referring to Christie’s Dubai-based head of watches for the Middle East, India and Africa.

Christie’s Middle East watch auction business began here in Dubai seven years ago. “To see a watch catalogue full of vintage and modern timepieces that we haven’t had before – a sale that’s on par with quality and value with Geneva, Hong Kong and New York – is just incredible,” adds Reardon.

The art of closing

Reardon and his team of specialists travel the world hunting down the next holy grail watch to be offered at auction. How fierce does the ‘hunt’ get?

“First and foremost we always stay within an ethical framework. But after that, the gloves are off.” And what’s the secret to securing a prized watch that can be auctioned? “You always sell yourself first and the auction house second. People don’t give [their watches to] brand X or brand Y. They give it to a person. You become part of their family. I’ve practically babysat some of my client’s children.”

Those sellers also at times test Reardon. “If someone bought us a $500 watch, we always help them and refer them to other platforms where they can sell. “I’ve had so many cases where after doing that, they say, ‘alright I can’t sell this $500 watch to Christie’s, but I also have this other piece’, and by helping them with that $500 watch that means nothing to them, they take out this $100,000 watch. It’s a test of how you will handle them.”

Which watch in Christie’s arsenal is Reardon currently most excited about? In May, a very special Patek Philippe pocketwatch will go to a live auction at Christie’s Rare Watches Auction in Geneva.

“This pocketwatch was the personal property of Adrien Philippe, the co-founder of Patek Philippe. Its provenance speaks in a way where money doesn’t matter and I’m quite sure that many collectors will feel that way.

“There’s only one we’ll see in our lifetime.”