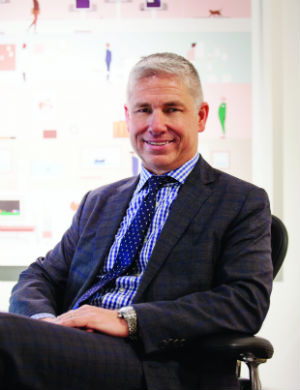 On a recent visit to Munich, this reporter ended up in Pinakothek der Moderne, a modern art museum, which is dedicated to the best art, design and architecture the civilized world has seen. On a Friday morning, the museum was particularly quiet except for a cackle coming from somewhere in the furniture level.

There, a group of students were marvelling at one of the most iconic pieces of furniture ever made – the Eames Lounge Chair, designed by Charles and Ray Eames for the Herman Miller Furniture Company.

Released in 1956, the Eames chair was the first product the duo designed for the luxury market. Almost an instant hit, and in constant production since, the Eames chair is today a symbol of great, almost revolutionary design and part of the legacy that Herman Miller has.

Now known as Herman Miller Inc., the American firm is one of the biggest manufacturers of office furniture, equipment and home furnishings. Apart from the Eames chair, it is also famous for being behind such design classics such as the Aeron chair and the Noguchi table, while also giving us the office cubicle.

Spreading this design legacy is what Brian Walker, president and CEO of Herman Miller, is in Dubai for. Here for the opening of a regional design centre, the Living Office, Walker tells me that these outposts are a crucial part of the thinking process behind the way Herman Miller operates.

“We have opened several of these centres across the world, from San Francisco to Sydney. They are primarily around our idea of living offices…they give us a way to think about the future of work…how to make employees happier and more productive,” he says.

On the topic of designing office spaces, Walker says that things have changed a lot over the last two decades – especially since the onset of the technology era.

There are more devices on a table, the work culture has evolved to include mobility and new industries have sprung up. Then there is the new start-up culture, which has radically changed what offices should look like.

However, even with all these changes, Herman Miller believes in certain over-arching ideas, according to Walker. One of them being that the best office spaces should reduce friction for employees.

“A lot of our work is about scripting the office. What we try to do is learn about the various modes and settings in an office space with its people and how they work…and then we script the office from the ground up, filling it with products that suit those modes and settings.”

But do local cultural trends have an impact on what an office should be like? Walker nods in agreement and says that while the way people work in one industry can be almost the same, the cultural and economic context can differ and in turn, influence the office space.

For example, an IT office in Sao Paulo with its high rental rates and the Brazilian cultural context will be different to one in Shanghai, with its comparatively lesser rates and Chinese culture, he explains.

In his response, Walker also reveals how Herman Miller has gone from a North American outlook to a global one. With the slowing of the office and furniture business in the US, the firm has increasingly looked at emerging markets including the Middle East.

He says that due to the slowing of the US economy, Herman Miller has, and will, continue to re-balance itself, both organically and inorganically, to focus on growth markets.

An example of this came in 2012, when the firm acquired POSH Office Systems Ltd., a Hong Kong-based designer, manufacturer, and distributor of office ware, to tap Hong Kong and the People’s Republic of China.

Walker is also heralding another transformation at Herman Miller changing the brand’s standing as evidenced by his letter to shareholders in its 2014 Annual Report.

“Here’s our ultimate dream: A person wakes up to have her coffee in a Herman Miller chair; she takes her kids to the doctor’s office and sees a Herman Miller and Nemschoff lobby at the pediatrician’s; she goes to work in a Living Office; she meets her family for dinner in a restaurant furnished with our tables and chairs,” he writes.