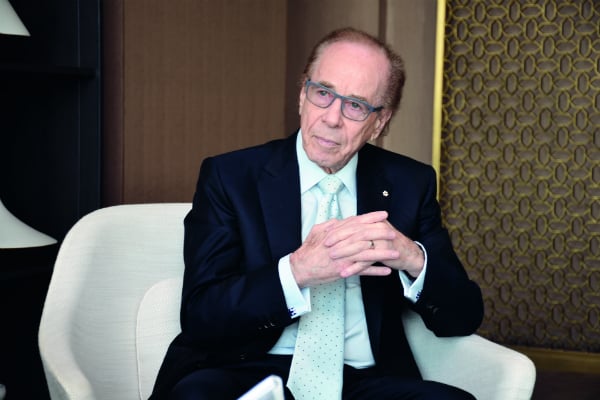 I’m ushered into one of the opulent state suites on the 18th floor of the new Four Seasons Kuwait at Burj Alshaya, waiting for Isadore Sharp to arrive.

The next 45 minutes are a spin through hospitality history and modernity, and he replies to all my questions with warmth and thought, even if he’s probably answered the same questions a hundred times. Most of all I’m struck by his calm demeanour. His wife, Rosalie, who is accompanying him on this trip, describes him as “imperturbable” in the foreword to Four Seasons: The Story of a Business Philosophy, which is a useful trait for any leader.

It’s a very different picture a short flight south. News of the Saudi corruption crackdown and Prince Alwaleed bin Talal’s detainment in Riyadh is dominating the news agenda (the prince has a major stake in Four Seasons through Kingdom Holding Company).

“I’m as shocked and surprised as everybody,” says the founder, chairman and CEO, as I broach the big question about halfway through our conversation.

“You manage your company and business in a way that it is able to continue to grow regardless of things that happen that cause change or turmoil. Look at what happened in the US with all the hurricanes – you can’t plan for that but you adapt.”

The Saudi central bank has frozen personal bank accounts of suspects pending court rulings on their cases “but not suspended operations of their companies”.

Later in the evening, in an ironic twist, I’m told guests who were suddenly told to pack their bags at the Ritz-Carlton were taken to the Four Seasons, also owned by KHC, illustrating that even in crisis there is opportunity.

For the builder-come-hotelier who started out with a humble motel in Toronto in 1961, and steadily built the Four Seasons brand into the globally recognised luxury hotel chain it is today – Four Seasons Tunis opened in December, its 107th hotel – his career has been one of constant adaptation. The first stand-alone Four Seasons Private Residences, in partnership with Finchatton, will open next year at Twenty Grosvenor Square in the heart of London’s Mayfair, containing just 37 units.

Appropriately, London at Park Lane served as a key turning point for Sharp and the brand.

“It was our third hotel and London gave me an insight into what I can do and what the company can do,” he says.

“It was enormously successful and I knew why – from that moment on, I knew we’d only operate medium-sized hotels of exceptional quality, and be the best. And in order to be the best, we’re going to make the quality of our service our distinguishing feature and competitive advantage.”

The ability to be flexible while sticking to core principles (the operator is renowned for its ‘golden rule’ of ‘doing unto others as you have them do unto you’) has helped provide underlying stability amid fluctuating markets and political changes. Four Seasons remains among the ‘100 best companies to work for’ with low turnover rates.

“When you start a company, you don’t know what your future will be, but as you gain traction you can make decisions on how you want the company to grow,” says Sharp.

“One of the key elements is the concept of promotion from within, it’s a meritocracy, enabling each individual to develop their own career path.

“In this hotel, there’s a lot who have transferred from other Four Seasons hotels.

“We have a very carefully orchestrated hiring process, every employee will go through four or five interviews. You’re relying on employees to deliver on the promise of this special experience.” 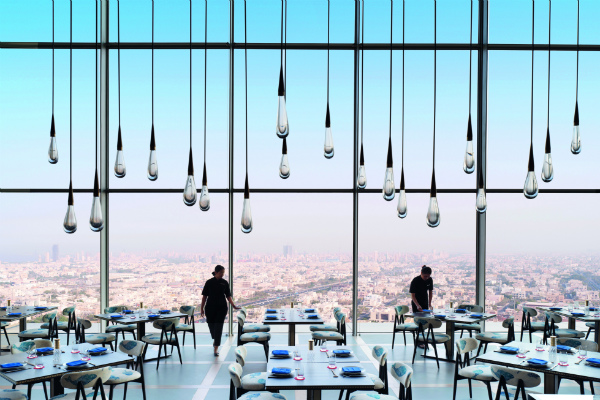 How true. I’ve enjoyed fancy launches, wonderful meals and attentive service over the years but the memories I take home are those behind the scenes; visiting the Baku staff canteen, wandering through Jumeirah Beach resort’s back-of-house corridors where positive slogans and commitment to staff well-being underpin excellent service.

“That golden rule has really been the most important decision that the company will ever make because it creates a culture,” he adds.

Service, location, product and recognition are crucial pillars. The second and third are interchangeable – for business travellers, location comes second and product third, while for leisure guests it tends to be the other way round.

In this day and age, everything is more fluid. After 24 hours in this new landmark, I’m not entirely sure if it’s a business or leisure hotel – the leisure facilities are first class. My eighth floor executive suite, one of 67 in a 217-room inventory, has touches which Toronto guests 50 years ago could only have dreamed of – vast TVs complete with connectivity options complemented by a private bar/espresso area and bedside iPad. This suite category has even loftier counterparts with diplomatic, ambassador and royal suites no doubt designed to be the last word in luxury.

For all its focus on service, Four Seasons remains one of the few operators without a loyalty programme, although it is working on a ‘guest recognition’ programme whereby hotels will be able to share guest preferences. Another example of moving with the times is the recent introduction of a mobile chat feature, which will probably be a source for mundane requests and unlikely to dilute face-to-face interaction.

“Technology has moved dramatically since we built our first hotel but it doesn’t really change your physical plant because we still need spaces,” says Sharp.

Such changes are now essential, as the chain is not only eager to court younger Millennial travellers but also facing increased competition from newly enlarged Marriott International with its Ritz-Carlton and St Regis brands, as well as Airbnb, although he insists the impact from the latter is minimal.

“You can get location and a nice product on Airbnb, but you can’t get service and recognition and these are key to the high-end traveller,” the chairman explains.

These high-net-worth people keep travelling, even during economic dips. Four Seasons’ private jet itineraries are regularly sold out way in advance; new for 2019 is a 16-day Latin escape adventure (February 9-24, $98,000 per person) and Timeless Encounters includes a stop in Dubai (September 17-October 10, $140,000 per person).

Overall, the Four Seasons founder remains upbeat about the prospects of all tiers of the travel industry.

“It’s just on the threshold of what it will become,” he says.

“Just do the maths – years back, the major industry was North America and Europe, today it’s a global industry, China, Russia, India, Latin America, over 4.5 billion and they’re all wired with smartphones. There will definitely be consolidation; you have to be very big or very good to stand out. There is more room for us to grow than we will need.”

Sharp insists it is still a small company, if the largest in the luxury space, and will look to add another 50 hotels in the next decade with Asia, Middle East and Africa likely to drive growth.

“This question is often asked – do you lose it when you keep growing? As we’ve gotten bigger, we’ve gotten better. So the best is yet to come.”