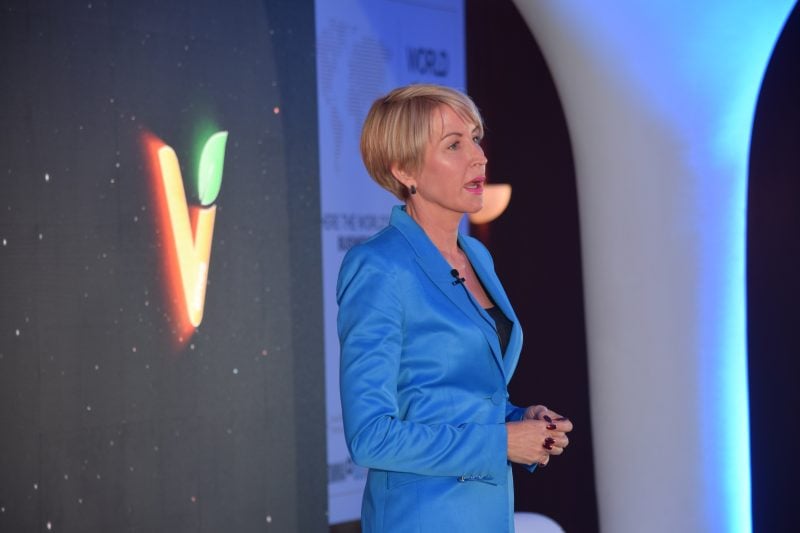 Whether you know her for her modelling, her animal rights advocacy, her numerous media appearances, or her former marriage to Sir Paul McCartney, you should not be distracted from the fact Heather Mills has built a business empire.

Since 1993, her plant-based, meat-free food company VBites has been steadily growing, and is now present in 24 countries around the world.

On a recent visit to Dubai to speak at the World CEO Forum, Gulf Business caught up with the entrepreneur about her plans for the region, why veganism is garnering great interest, and how VBites can have a healthy impact.

Your award-winning vegan food company VBites was launched 25 years ago and has expanded across 24 countries. Why is now the right time to bring it to the UAE? How close are you to launching in the region?

My godson and his family have lived in Dubai for over 10 years and the expat community has been asking for our products for a long time.

In the last year I have been asked through other contacts to bring the product as there are many Indians who love vegan food. In addition, I have had discussions with Prince Khaled bin Alwaleed bin Talal who is bringing huge awareness around the world to encourage people to live a plant-based lifestyle.

The world has huge health issues and the UAE is no different, with the increase of diabetes. Many of these illnesses can be alleviated on a plant-based diet.

What makes VBites different to similar products in the market? How have you honed your offering over the years?

In all taste tests VBites products always blow away the competition. We are the pioneers of meat, fish and dairy free products for 25 years, so our food technology and innovation is years ahead of anybody else.

The corporates are now seeing this as big business after three companies sold for between $120m-$550m – just for a few vegan meat alternatives. We have 540 products and others are now copying our products quickly and very badly, which is sad because if a consumer tries the wrong one it will be off-putting for them to try again.

What gave you the impetus to launch the company, and how did you build the business to what it is today?

I lost my leg 25 years ago and my friend pulled me out of the hospital as she claimed she had healed her breast cancer on a plant-based diet. I was willing to try anything as the infection had crept up my leg and was about to take my knee.

After many months in the hospital on antibiotics destroying my digestive system I was willing to try anything. Two weeks on a plant-based diet my infection was gone and I wanted the world to know. This was back in 1993. I wrote books about it and watched thousands more heal from different illnesses around the world.

This became my inspiration to spread the word as much as possible, but I realised not everybody has will power or an illness to motivate them to look after themselves. From that day I decided to replicate fast food in a healthy way and so became VBites.

How central has education been to the growth of the brand? Are people still largely in the dark about plant-based diets and vegan lifestyles?

In the UK and Sweden people are very aware of a plant-based diet because many fast food chains use our allergen free coconut cheese on their pizzas or in their pastas. We hope to raise awareness in the UAE through schools and hospitals and companies who want to reduce their huge healthcare costs by educating their employees on a better diet they will have less sick days reducing their healthcare bill and keeping their employees happy.

How important is it to have a platform such as the World CEO Forum? What was your key message to delegates?

The message was that nutrition is at the epicenter of all disease and problem-solving in the world. Without health we are nothing and so many huge problems regarding health the animals and the environment can all be resolved on a plant-based diet.

We need to leave the world we have messed up in a better place for the next generations. Time is of the essence and we must fix these problems now. Nutrition is the key to this as it creates a domino effect of everything regarding health, employment, global warming and the trillion dollar healthcare problem, and ultimately finance. It will be big businesses that will bring about this change through their need  for money.

What kind of health and wellness impact do you hope to make in the region? In which areas can VBites make a tangible difference?

I am hoping our products go into foodservice, catering, retail and especially schools and hospitals. It amazes me that unhealthy food is allowed in the hospital. It is the one place where you can contain a sick person and educate them and feed them great food so they are inspired and motivated to look after themselves and not return to the hospital in the future.

Do you have any growth plans for the Gulf region outside the UAE? Have you identified an appetite for vegan products in countries such as Kuwait, Bahrain, Oman and Saudi Arabia?

We are currently in 24 countries and would love to expand into the Middle East. I am having serious talks to manufacture here to bring employment and food to the region and the surrounding countries.

One of the products we manufacture is the original source of omega three. Most people think omega three comes from fish, but it does not; it comes from the algae the fish eat. With our algae we grow it in the sunlight in incubators, and every 2.5 tons we grow depletes C02 by 1.5 tons, making this a gem in reducing the carbon footprint of a country.

The UAE is the perfect environment with your sunlight to grow this hugely beneficial algae.