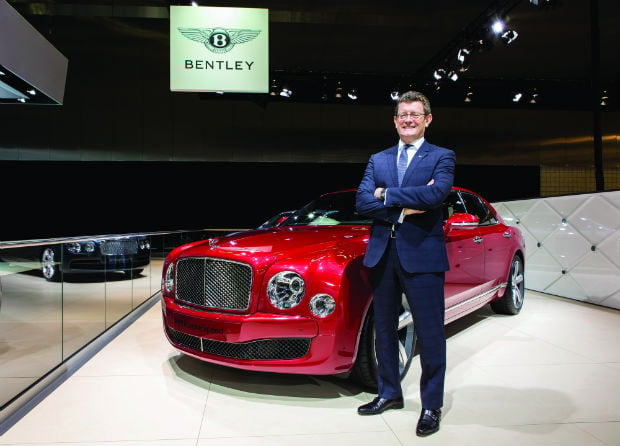 For all of Doha’s surging growth in the past decade, the city’s main exhibition space, the Qatar National Convention Centre, is not always abuzz with the kind of excitement seen at the Qatar Motor Show.

The crowd is a mix of executives straight out of the TV series Suits, models that would not look out of place at a Milan catwalk, and jostling photographers scrambling to get the best angles, occasionally knocking into casual walk-ins gawking at the latest supercars on display.

Assembled across the exhibition hall are some of the world’s best- known car manufacturers, all eager to show off their latest models in a procession of unveilings that stretches well into the afternoon.

Among those at the opposite end of the photographers’ lenses is Kevin Rose, board member for sales, marketing and aftersales at Bentley Motors Ltd, the British luxury car manufacturer.

Following the unveiling of the company’s latest model, the Mulsanne speed, the two of us find a quiet corner to chat.

Beginning with a look back at 2014, the executive, who admits to enjoying a brisk ride in his Flying Spur on UK’s country roads, is pleased with the company’s performance.

“We managed to grow nine per cent in a market that will probably turn out to be more or less flat” he says.

The Volkswagen-owned brand sold a record 11,020 vehicles last year, with a strong performance from its Middle Eastern operations.

Deliveries in the first half of the year grew by 30 per cent and overall sales for the region were up by seven per cent. The UAE was also the company’s leading location in terms of sales globally.

Given the growth of Bentley’s Middle Eastern wing, which now makes up 12 per cent of global sales, the company decided to bring its combined regional operations for the Middle East, Africa, India and Asia Pacific to Dubai at the end of last year, taking advantage of the emirate’s global connectivity and trebling the size of the local team in the process.

Rose expects Bentley’s overall percentage of sales from the region to increase as a result, describing the Middle East as “the biggest opportunity” for the company in the next “three to four years”.

Stressing that the firm is also “assessing what impact” lower oil prices will have on its fortunes in the region, Rose says that one factor that will help drive sales in a region known for its appetite for larger cars is Bentley’s first foray into the luxury SUV market, dubbed Bentayga.

Although sharing its unusual name with a mountain on Spain’s Grand Canary Island, Rose reveals Bentley’s inspiration for the vehicle actually came from a combination of the first four letters of Bentley with the word Taiga, which describes large areas of forest seen in the northern hemisphere.

It was then realised that the name would be pronounced differently depending on the market, so the ‘i’ was replaced by a ‘y’ making the combination.

“We had somebody who heard it on the day it was announced in Detroit and said ‘that’s terrible’, but then sent us an email three days later saying ‘actually I’ve been saying it to myself and I really like it now’,” he jokes.

The model, which is expected to be revealed later this year, is aimed to fill a gap in the market above the high premium SUVs offered by the likes of Range Rover, with Rose expecting it to appeal to owners looking to drive themselves, rather than the chauffeur interest seen with other Bentley vehicles.

The executive believes that the Bentayga could place Bentley on the road to much higher vehicle sales, but dismisses the reported target of 20,000 vehicle sales annually by 2020, carried in a German newspaper, as a “piece of speculation”.

“It [20,000] can’t be done realistically and we wouldn’t want to do it with the current product range. We would be forcing sales too much. It would come by adding others. So with the SUV, if the markets run well, its possible we could grow from 11 thousand to say 14 or 15 thousand.”

  Any higher sales would require the company to have at least one additional product line and some more derivatives, he suggests, revealing that the British brand has “plenty of ideas” and it was simply a case of when they can be financed and brought to the market.

Some football fans (especially Manhester City fans in Abu Dhabi) will be hoping that Rose won’t have too much input on the decor side, however, after he reveals at the end of our interview that his next car will be a Bentley Continental GT Speed in his team’s colours, with a blue and white interior and an exterior shade fittingly named ‘Chelsea Blue’.