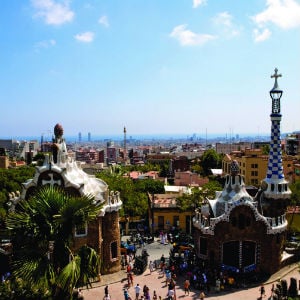 Barcelona likes to catch people off guard. Gaudi’s massive church, La Sagrada Familia, looks like a Disneyland castle towering over small residential buildings, with spires that pierce the heavens. The ocean is calm, but the buildings and roofs have waves. A tantrum of rain is followed just an hour later by skies so deceptively sunny it is hard to imagine clouds ever crossing them.

In the centre of Montjuic, a peaceful hill overlooking the entire city, the showy Palau Nacional appears to be an old palace that watched Barcelona grow, but was actually constructed temporarily for World exhibition displays in the 1920s and simply never torn down. The area is green and full of couples strolling hand in hand.

La Rambla is a long, crowded pedestrian boulevard where everything is sold – from delicious waffles with ice cream to illegal substances. This cafe-lined street is usually a traveller’s first taste of Barcelona’s happy contradictions – where dimly-lit, posh restaurants are found next to Mercat de la Boqueria, one of the busiest and loudest fresh produce markets in Europe.

Boutique hotels are never too far from a McDonald’s restaurant, with one of the franchises taking up five floors of a building in the heart of La Rambla. Still, the fast food chain doesn’t take the limelight away from the dozens of tapas bars serving Catalan cuisine and cervecerias, or beer houses, scattered across the strip. After a long day of walking – with umbrella in hand just in case – nothing feels better than choosing a tapas bar humming with the sound of laughter and clinking glasses, finding a free bar stool, and ordering a cold drink to go with hot appetisers.

La Rambla spills onto Placa de Catalunya, a large square with a fountain that serves as a meeting point for taxis, red double-decker tour buses and tourists with maps. The next street over, Passeig de Gracia, is a chic address with fewer crowds and more upscale hotels, including the new Mandarin Oriental Hotel. The tree-lined street is known for its proximity to La Rambla, good shopping opportunities, and more of Antoni Gaudi’s other-wordly works.

Casa Batllo stands out with blue, green and purple tiles amid more modest buildings on the trendy street.

La Pedrera, on the other hand, is known for its undulating roof. A modern, inventive architect and urban planner, Gaudi’s touch is apparent all over the city.

Park Guell is one of Gaudi’s masterpieces: a colourful park north of Gracia filled with artists carrying sketchpads and musicians singing or strumming guitars. Featured frequently in movies – including Woody Allen’s film Vicky Cristina Barcelona most recently – the park offers stunning views and an escape from the city without straying too far from the action.

The characters in the film, mainly actors, painters and photographers, also devote much of their time to Barrio Gotic, Barcelona’s old town. Small alleyways, brown buildings, black wrought-iron balconies and graffiti give this part of Barcelona an old-world yet very urban feel. Walking all the way through the old town will eventually lead to Port Olympic and Port Vell.

Dotted with bars and clubs, the marinas are calm by day and busy hot-spots by night. Make sure to finish your meal by midnight at beachside Asian-fusion restaurant Shoko before the music builds to clubbing levels. Then all that’s left is to enjoy the music, the starry sky and the ocean breeze.